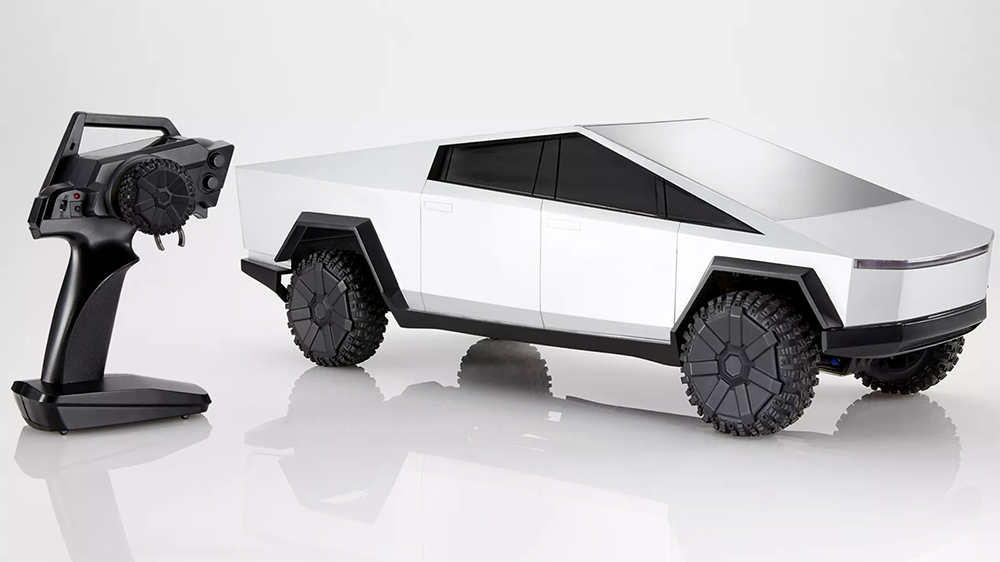 You’ll have to wait till the end of 2021 to get your hands on Tesla’s infamous Cybertruck, but, thanks to Mattel, you’ll be able to grab a miniature version a whole lot sooner.

The company’s Hot Wheels brand just announced that it will release two remote-controlled scale versions of the Cybertruck. The smaller of the two will be 1:64 scale and retail for a wallet-friendly $20 while the larger 1:10 scale version will go for $400, still a reasonable sum compared to the actual car’s $40,000 price tag. The limited-edition duo is set to hit the market in December––just in time for the holiday gift-giving season.

As you might expect, the larger of the two models with a few more tricks up its sleeve. For starters, functioning headlights and taillights add a more realistic feel. Ditto for the telescoping tailgate that unfurls into a loading ramp. The Hot Wheels website describes its construction as “off-road and rugged terrain capable”––a claim buoyed by all-wheel drive that can switch between two modes––so it should be good to go even if you plan on taking it for a spin in spots not as evenly paved as your driveway. And rechargeable 9/9V rechargeable battery keeps those wheels turning for extended periods.

There are other intriguing elements like the removable plastic body that reveals a detailed interior. The most inspired touch, though, has to be the removable sticker that mimics the famous shattered window from the actual truck’s debut. Given that Tesla was involved with the development of Hot Wheel’s version, Elon Musk might be eager to give the unexpected viral moment some extra legs. Or he just has a healthy sense of humor.

The Cybertruck has become something of a lightning rod for Tesla, no small feat given the brand’s history. Officially announced last November, the angular, Blade Runner-inspired truck debuted at a widely covered, invitation-only event where Musk touted its design and supposedly shatter-proof glass windows. A live demonstration debunked the latter claim. Twice. But that doesn’t appear to have dampened interest in the vehicle. Musk has since claimed the company has received 200,000 pre-orders for the Cybertruck.

Tesla has subsequently become the first US carmaker to cross the $100 billion mark and is now worth more than Ford and General Motors combined.