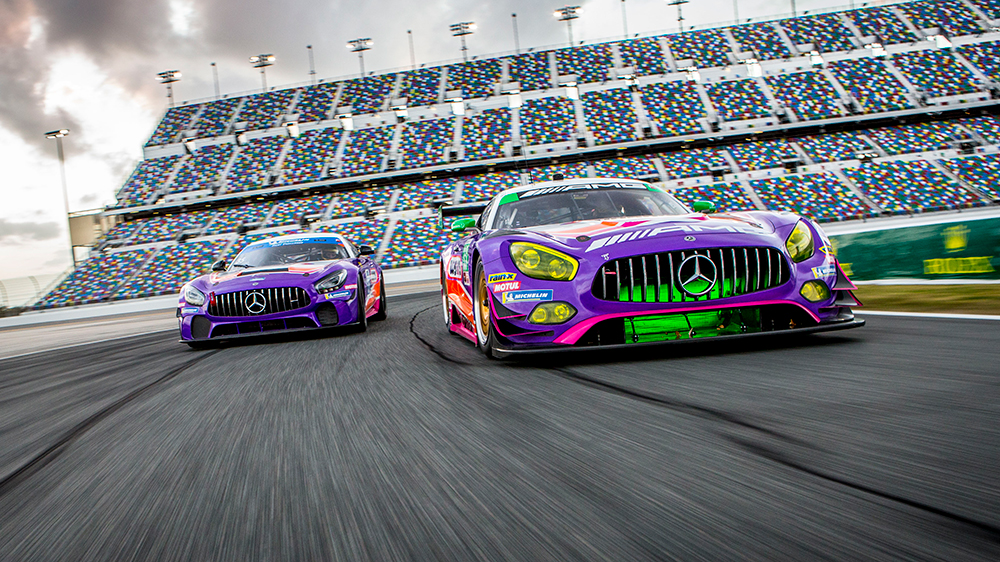 Ben Keating, a man who has won at the Rolex 24 Hours at Daytona, 12 Hours of Sebring, and Petit Le Mans, hadn’t ever driven on a race track until he was 35 years old. The occasion was a Christmas gift from his wife for a track session in a street car. Keating, who owned a Chrysler-Dodge-Jeep dealership in Texas, plucked a Dodge Viper from his showroom floor, borrowed a helmet, and promptly learned what boiled brake fluid felt like. But even as kind strangers bled his lines for him, Keating knew he had a larger problem: the addiction of racing had taken hold.

In certain classes of sportscar racing, a team wishing to field an entry must include what’s called a gentleman driver, effectively a non-professional driver who pays for his or her seat. The concept is a polarizing one, though all can agree the influx of funding from the gentleman drivers does help keep sportscar racing humming along. Over the years since his first taste of a track, Keating has become one of the top gentleman drivers.

He now owns nearly two dozen dealerships across Texas, his latest being a Mercedes-Benz showroom, which is fitting, since Keating races a Mercedes-AMG GT3 in IMSA. Keating spoke with Robb Report during a break between stints of the 2019 Rolex 24 Hours at Daytona, and he readily admits that without his prosperous career, he’d likely not be sitting here. And while he acknowledges his path was unorthodox, Keating has sound advice for anyone who wants to become a gentleman driver.

You need to need speed

First off, you’ve got to like going very fast. More importantly, you’ve got to be comfortable behind the wheel at those speeds. “The best way is just to get a lot of seat time,” Keating says. “Start small, with a group like Chin Track Days, where you can register, bring your street car on track, and just get used to what it feels like out there.” This is not particularly costly, though it’s certainly not cheap, with a session going for $350 a pop, which includes a (hopefully forgiving) coach. Once you don’t feel panicked at 140 down a straight, you’ve got to jones for that speed over and over.

You’ve got to go wheel-to-wheel

“Race craft is what we call it,’ Keating says, referring to the nuances of racing with other cars surrounding you. “You need to know how to pass other people but, more importantly, you need to learn how to be passed. When you get out there at first, you’re not going to be the fastest guy and you need to let people get by you without causing an incident.” You can ease into wheel-to-wheel situations via a race school, such as ones sponsored by NASA or SCCA or Skip Barber, all of which will help get you a competition license after you prove you’re level-headed in race traffic.

Hone your senses by dirt tracking

“When I started sportscar racing, I was uncomfortable in traffic,” says Keating, who noted he was put on probation early on after too many incidents. “If I had a restart and I had four cars in front and behind, I was scared to death I was going to crash. My coach told me to find a local dirt track and rent a car from someone and get comfortable in close quarters in a dirt car. For $1,000, I rented a car, tires, and support for the weekend. It blew my mind. Dirt cars have no mirrors anywhere. You have to get a feeling when a car is next to you, on the inside or outside, knowing they can’t see you.” Keating says that the affordability of dirt track racing allows for a cheaper learning curve, too. “I crashed the car and broke a front spindle. The part was only $85.”

A good driver can use a regular street car and beat a race car. “You don’t have to have a $100,000 sports car to be fast. At a lot of club racing events, they’ll let you take a rental car around the track to learn,” Keating says. “One of my favorite things to do is take a minivan and load it up with less-experienced drivers and haul ass around the circuit. You can still get sideways in a minivan, and you can still be incredibly fast in a minivan. People have no idea what a regular car is capable of if you know what you’re doing.”

Learn a track before you go

In 2009, Keating plunked down $19,000 for a full driving simulator rig, with the moving seat and whole nine yards. “I had it installed in my office,” he recounts. “And the time I spent per week depended on the track I was trying to learn. I was going to a bunch I’d never driven, so I needed know turns and brake zones. Yes, $19,000 is a lot to spend, but it was cheaper than getting to the tracks and spending a day learning in the real car.” Professional sims can go for more than $180,000, but Playstation or Xbox games also help you learn a circuit.

Don’t assemble a team. Find one to join

When you’re ready to join the big leagues, don’t try to get all the elements together yourself. “When I was doing spec series, I took a technician out of the dealership along with me to go racing. When I stepped up [to IMSA], I stopped that and started paying someone else to manage everything because I do this for fun. I don’t need it to become a job,” Keating laughs.

One of the reasons why Keating feels like he’s gotten better is because he’s in the same car on the same track in the same conditions with professional drivers who are amazingly fast. “I watch everything they do, and I get to learn what I’m missing,” he says.

Some teams have two gentleman drivers footing the bills, which works out to about $1,000,000 per driver, per season. Other teams with a solo gentleman driver could pay anywhere from $2,000,000 on up. That cost covers everything for a season. Keating politely declined to disclose how much he personally spends, but shared a telling anecdote. “Endurance racing, like here at the 24 Hours of Daytona, is the most expensive form of racing. A set of tires costs $2,500, and in this race we’ll go through 30 sets. That’s $75,000 for tires. For one race. It’s outrageously expensive [here].”

Keating nods when the subject of being termed a “gentleman driver” is broached. “Some guys don’t like it, but the truth is I embrace it. It’s the truth. I’m not a professional. Why should I be called one?,” Keating says, as former F1 champion Fernando Alonso—also racing in the 24 Hours at Daytona—flashes on a nearby screen. “Besides, in what other sport can the average 47-year-old man from Texas compete alongside and against a world champion?”