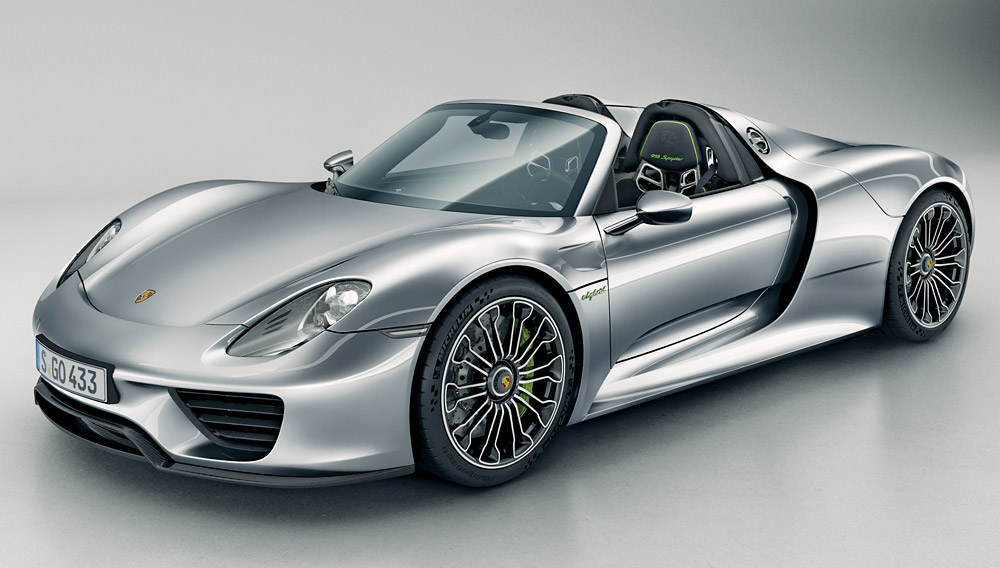 No car, it seemed, was worthy of the Porsche 918 Spyder hybrid’s introductory hype and hyperbole, the early bravos and ballyhoo, the three-plus years of premature applause. But driving is believing, and this car deserved every hurrah of its buildup. At its global media launch late last year in Valencia, Spain, on the Circuit de la Comunitat Valenciana Ricardo Tormo, the 918 demonstrated power and performance equal to those of its hyper hybrid contemporaries: Ferrari’s LaFerrari and McLaren’s P1.

The driver-friendly 2.4-mile, 12-corner track is a regular host to European MotoGP motorcycle events and Formula 1 team test-drives. On this day in December, however, it belonged to Porsche-employed drivers in new  911 Turbo S models and six U.S.  journalists, each piloting a 918. The pre-drive meeting was brief, and none of the instructions was negotiable: No passing allowed; just follow in a line behind the 911 Turbos—let those drivers show you the correct lines; and try to keep up with them.

That final directive seemed daunting. After all, these were professional drivers aboard Porsche’s fastest 911s, and we were amateurs motoring in unfamiliar cars around a strange circuit. But within two or three laps, the pros were being tailgated into mild understeer, while the 918 drivers were braking later and diving deeper into the corners and even backing off to avoid bending the Turbos’ tailpipes. On the pit straight, the event became a bumper-to-bumper 150 mph motorcade.

The ability to keep up with and even upstage the pros was nothing for us scribblers to strut about before spouses and grandchildren. We were not the better drivers; we were in the better cars. The 918’s pinpoint handling, 887 hp, brute torque, adaptive suspension, and adjustable aerodynamics that create Gorilla Glue downforce compensated for any of the writers’ shortcomings.

The 918 is stunningly beautiful at rest, and outrageously quick on the move. Including the rear-wheel steering, the torque vectoring for even greater turn-in, and the 7-speed PDK dual-clutch transmission that performs nearly instantaneous shifting, the car’s technology is a match for just about any of the current high-performance magic. Indeed, its amalgam of power, performance, and fuel efficiency may help revise the engineering paradigms that the almighty Bugatti Veyron rearranged in 2005.

As a plug-in hybrid, the 918 delivers all the benefits of gas-electric motoring—from improved vehicle range to reduced emissions and salved consciences. Yet Porsche, following nearly seven decades of family tradition—and in lockstep with Ferrari and McLaren—went the extra distance in R & D and built street-brawling performance into this hybrid.

The 918’s numbers are huge. The car rips along at 211 mph, making it the fastest street Porsche ever. Its nearly 900 hp easily propels its 3,715 pounds of curb weight, which is kept to a minimum by a carbon-fiber monocoque frame and fuselage. A run from zero to 60 mph takes just 2.6 seconds, and in about 5 seconds more, the car will reach twice that speed.

The 918 has tamed the notorious turns of the Nürburgring’s Nordschleife, the auto industry’s favored site for establishing performance bragging rights. It lapped the 12.8-mile circuit in a production-car record of 6 minutes and 57 seconds.

Porsche will produce only 918 examples of the 918, and most are spoken for. The car’s base price is $845,000, and the optional Weissach package is $84,000. The Weissach makes the car some 80 pounds lighter because it is heavy on carbon, titanium, and magnesium. It also includes the choice of a very contemporary matte black finish or the classic liveries displayed by Le Mans–winning Porsches. Remember the vivid red, white, and blue of Martini Racing? Imagine driving a car with that color scheme around town.

“For me, the 918 is a completely new way of using a car,” says the 918’s project manager, Matthias Scholz. “It is totally different in that it is three cars in one. Very quiet in electrical mode, then open the roof and listen to the radio while driving in hybrid mode. Or you can pull out the beast in it and go racing.”

Going hybrid, Scholz continues, is the “best compromise, the best combination of a power train to save fuel on one hand while taking performance to its highest level. [All-electric vehicles] are too tame, and all-gasoline is not socially correct, so this is the perfect combination. I don’t think it is the final solution. But for the moment, it is better and more useful.”

The design of the mid-engine, two-seat 918 is distinct from that of the immortal 911. It is more daring and futuristic than any previous Porsche model. The car sits—almost poses—long, wide, waist high (the center of gravity is no higher than its hubs), and very handsome.

The 918’s gas engine is a 4.6-liter, dry-sump V-8. It generates much of the electrical energy and contributes 608 hp to the three-motor system. Set directly behind the V-8 is a 115-kilowatt electric motor producing another 154 hp for the rear wheels. And in the car’s sloping snout sits a second electric motor, one that drives the front wheels with 95 kilowatts and 127 hp. This combination also generates an astounding 940 ft lbs of torque, delivering a supernatural acceleration that will melt your contact lenses.

The V-8 does the heavy lifting during routine driving, and the electric motors provide additional zap on demand. When the car is dawdling, the electric motors do most of the work, helping reduce fuel consumption to a dribble. They also process surplus electricity generated by the gasoline engine and by the car’s regenerative braking system, feeding it back into the car’s 312 lithium-ion batteries. Running fully electric and at highway speed, the 918 has a range of about 18 miles. When the car is in sport hybrid mode, it recharges while braking and when traveling at low speeds.

Porsche estimates the 918’s fuel efficiency at 71 mpg. Other observers suggest 40 mpg for leisurely to moderate drives. Stoke the fires for a long stretch, and that number likely will drop below double digits.

The 918 starts with a hiss, not a roar, and is eerily silent when it begins moving because its initial progress is powered fully by electricity. Indeed, it seemed incongruous to depart from the tire-scarred, oil-smudged pit lane at the Valencia racetrack without making a sound.

Locked in E mode—the first notch on a knurled, five-mode rotary knob that is set close to the steering wheel and looks similar to Ferrari’s manettino—the 918 offers little to excite drivers or passengers. Top speed is 93 mph, and zero to 60 mph takes about 7 seconds. Turn the knob from E to H, for hybrid, and boom!—the V-8 kicks in, ready to work alternately with the electric motors. A third click, to S, activates the sport mode. Now it is all ahead full, with the V-8 working continuously and the electric motors poised to augment the gas engine’s already impressive capabilities.

The knob’s R stands for race mode and for the release of Scholz’s beast. The combustion engine handles the higher loads, and the electric motors are programmed to add full boost. The air inlets open for optimum cooling, and the PDK is reprogrammed to provide even quicker shifts. A scarlet button set in the center of the mapping knob will release all reserve power when pressed. It is for hot lapping, for seeking a pole position, for push-to-pass and flat-out overtaking, and it will quickly exhaust the batteries.

As a cooldown after the racetrack drive, the 918s were taken on a crosstown tour of the city of Valencia: around the Museu de Belles Arts de Valencia, where works by El Greco, Velázquez, and Goya hang; past the Plaza de Toros, the bullring built in the mid-19th century that still hosts more than two dozen bullfights a year and seats more than 10,000 spectators; and by the outrageous and radical architecture of Ciudad de las Artes y las Ciencias (City of Arts and Sciences), a complex whose structures include a concert hall, a science museum, and an aquarium.

The 918, with its roof panels removed and its audio system  playing Miles Davis, was on its best behavior. Cruising was smooth, unruffled, and without drama, but for the occasional exhaust snort and crackle when the car was pushed to catch up with the other Porsches. There were no hiccups to indicate a transition from one power source to another.

As the cluster of cars passed the City of Arts and Sciences, a group of uniformed schoolchildren came running from between the complex’s ponds and pavilions to crowd the curbside and cheer and applaud and wave at the 918s. They likely had no idea that these were the first 918s to be seen in Spain. They may not have even recognized that the cars were Porsches. But they seemed to know that here was something different and wonderful that suggested an escape into life’s adventures.