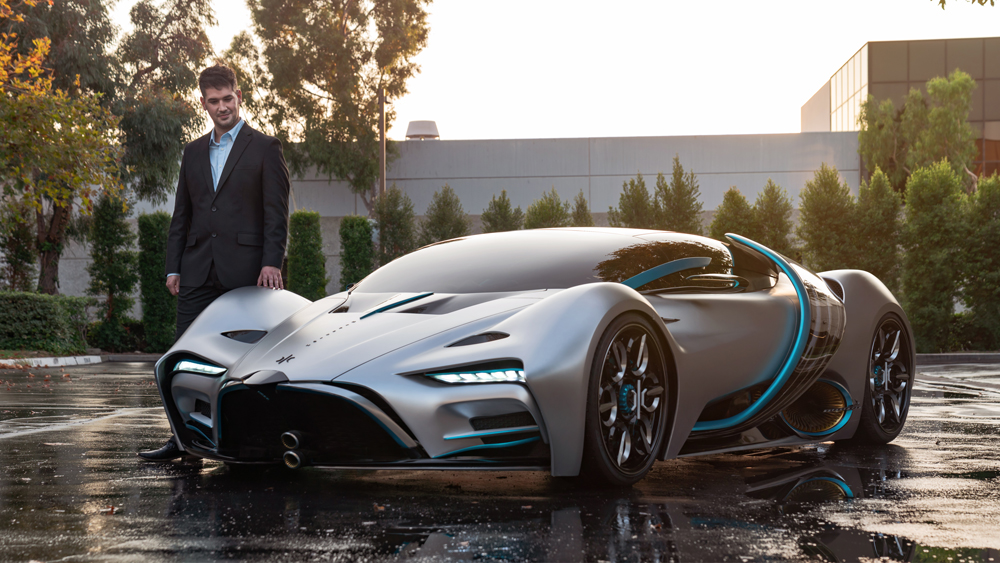 Speaking with Angelo Kafantaris, it’s clear the man has a grand-scale vision. As CEO of technology startup Hyperion Motors, he’s betting big on the most common element in the universe, hydrogen. Hyperion sourced fuel cell technologies from NASA—which used hydrogen to rocket Neil Armstrong to the moon and back—to develop the FCEV (Fuel Cell Electric Vehicle) solution for its XP-1 hypercar debuted this past August. Although Kafantaris can’t get into power-train specifics just yet, he promises his machine will boast a more than 1,000-mile range with zero emissions, a 221 mph top speed and a zero-to-60 mph clip of 2.2 seconds.

Of course, without specifics it’s tough to separate the XP-1 from vaporware. Compound the issue with many people dismissing hydrogen’s real-world viability, as evidenced by the common sarcastic line: “Hydrogen is the fuel of the future, and it always will be.”

But the fact of the matter is that things are changing rapidly. Several months back, Hyundai delivered its first ten XCIENT fuel cell trucks to Switzerland; 1,600 are due by 2025. China’s already running 1,000 fuel cell buses. Germany is building the world’s first hydrogen station for passenger trains, and has committed at least €9 billion (more than $11 billion) in its Covid-related stimulus packages towards developing hydrogen-related technologies. The Netherlands, Australia, Portugal and Japan have all announced accelerated hydrogen strategies during the pandemic. San Francisco ordered hydrogen-based ferries, and mega-retailers Amazon and Walmart already switched to hydrogen-powered forklifts in their warehouses.

So FCEVs are coming on strong, at least in the long-haul, last-mile delivery sectors of transportation. The question, however, isn’t their viability in the commercial arena, but the consumer market. But the three arms of Hyperion Companies—Hyperion Energy, Hyperion Motors, and Hyperion Aerospace—promise to tackle those issues one by one, from hydrogen generation to storage. We spoke with Kafantaris specifically about his most evocative green product, the XP-1.

The core tech was developed with a bunch of NASA veterans, and we’re using the NASA technology and taking it to commercialization. For example, there’s solar technology on the vehicle wing that’s able to articulate and match the movement of the sun. It also creates downforce, and allows you to have great cornering from one side to the other. Of course, it [the XP-1] has the 1,000-mile range capacity—which we all love—and the fast refuel. It has a very elegant, Tony Stark–like interface in the vehicle. It has the ability to do gesture control, and that will be a technology we’re going to take to another level in future iterations.

Regarding the other details of the car, there’s going to be different iterations. Some of them will be more in tune to what we call a base model, and then others will be a “Space Package” that will be the ultimate version that achieves the most ridiculous metrics and performance that we could possibly get to. In other words, we do want this car to be a showcase of not just hydrogen technology, but also American innovation through America’s greatest accomplishments, vis-à-vis NASA technology.

The Hyperion XP-1 is expected to have a 221 mph top speed.  Photo: Courtesy of Hyperion Companies, Inc.

What are some of the other forms of innovative tech?

There is a technology that takes heat-waste energy and turns it back into electric energy in a number of places on the vehicle. There is storage technology, which again is very proprietary so I can’t get into too much detail on that, but essentially, from the consumer perspective, the car has a very long range and a very great zero-to-60 [mph].

How does the hydrogen-based power train compare to battery when it comes to performance?

When you test-drive a battery car, you are always impressed with the acceleration. It’s until you slam the brakes and try to corner that you’re like, “Wait a minute, what’s going on here? This is extraordinarily heavy, why am I throwing this much weight around?” [With the XP-1] you have all the great stuff from battery technology that’s been developed, but then eliminate the weight penalty.

If you’ve got a vehicle that is going to be very light, it can perform so much better. And if it’s a technology that performs well in hot and cold [conditions], unlike batteries, then you can race this thing. We definitely want to show the vehicle off, what it can do with range and performance—it is a hypercar in every sense of the word. It’s got a weight distribution that’s biased towards the rear, all the power comes from the rear motors. It’s a fun car to drive. I’ve had too much fun with this car in our parking lot, and also on the track. There is a sound, get ready for it. That is one great thing about hydrogen; you’re going to hear something that sounds like a dragon clearing his throat every time you hit that gas.

According to Kafantaris: “We definitely want to show the vehicle off, what it can do with range and performance—it is a hypercar in every sense of the word.”  Photo: Courtesy of Hyperion Companies, Inc.

Have you disclosed pricing?

We haven’t. And that’s because, when we started this journey, we actually wanted to deliver a really affordable vehicle that was more in tune with what you might find at a [BMW] i8 price range. We thought that was necessary for the story to be properly told, so people didn’t discount it as a technology that was too expensive and not realistic. The reality is it can be built really cheaply, but we kept adding features because we thought, “Let’s make the ultimate version.” And now, with all the NASA technology that’s piled in there, it is an expensive vehicle in the seven-figure range. However, we will very quickly be doing a couple of others that are more affordable.

Hyperion plans for the XP-1 to have a 1,000-mile range.  Photo: Courtesy of Hyperion Companies, Inc.

Do you mean more affordable versions of the same mid-engine two-seater, or other models entirely?

I think it’s important to note that we don’t aspire to be a car company. We aspire to produce the most cutting-edge technology that can be applied to a number of deals within those industries, and we would like to help those industries grow in the direction that they aren’t already.

Kafantaris notes that the car “sounds like a dragon clearing his throat every time you hit that gas.”  Photo: Courtesy of Hyperion Companies, Inc.

It sounds like you’re looking to be a leader in FCEV technology—creating tech and licensing it to other people, is that right?

I think it’s close. I think instead of licensing, I would say we want to work in partnership with other companies with more expertise in those fields, so that we do not distract ourselves from the core technology. You go to car builders to build a car if you want to build it in large quantities. We want to maximize the input that we can have on the world by providing only what makes us unique: cutting-edge technology originally designed for space flight, and then also bringing energy solutions the world desperately needs to bring down greenhouse gas.

“It’s got a weight distribution that’s biased towards the rear,” mentions Kafantaris. “All the power comes from the rear motors.”  Photo: Courtesy of Hyperion Companies, Inc.

So will you potentially work with an established OEM to become its FCEV power-train supplier, while building out stations and creating storage and distribution solutions?

That is, essentially, the idea. But there are three divisions [of the company]: one is the motor division, one is the aerospace division and one is the energy division. Each subdivision of Hyperion in these different sectors will be working with a major player in that space so that it can have more reach, so that it can do more, faster, and so that it doesn’t get bogged down with trying to reinvent the wheel.

We care a lot about the product. We think that good design and good engineering go hand-in-hand to tell a great story, and that’s what we think we’ve done here. And we’re just proud, more than anything, that after eight-and-a-half long years we’re finally be able to share our journey through the vision of this car. Stay tuned for more, it’s just the beginning. The potential of hydrogen is truly limitless.