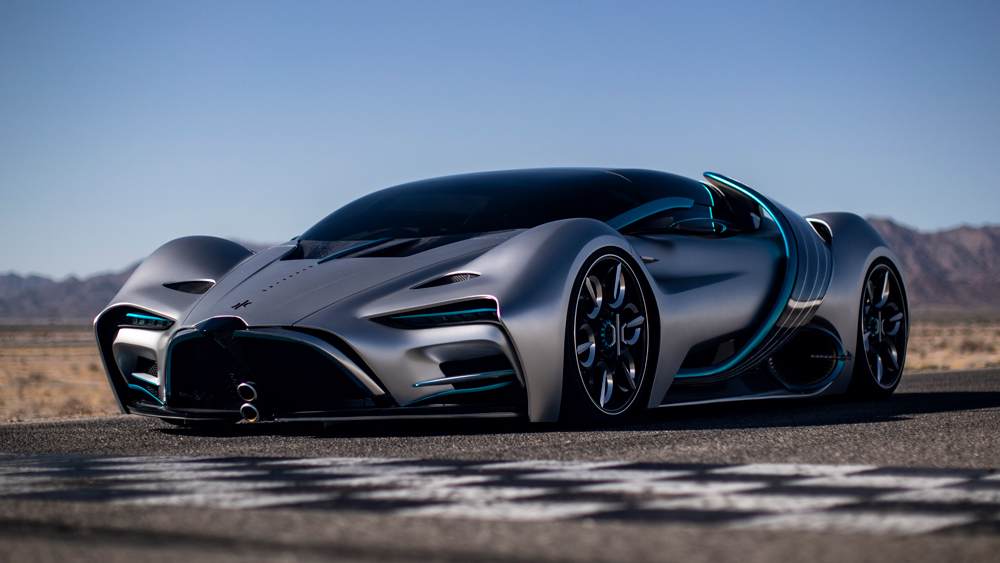 In the United States, plug-in electric vehicles account for just less than 2 percent of all vehicles running on roads, but Southern California–based Hyperion Companies, Inc., and its Hyperion Motors division, is banking on cutting-edge, space-grade hydrogen fuel-cell technology to help consumers embrace the electric car market with much more vigor. Hyperion’s first salvo in the battle against combustion is the XP-1 prototype—a futuristic supercar with a claimed 1,016-mile range and the ability to haul to 60 mph in 2.2 seconds. Oh, and the recharge time is less than five minutes.

Skeptics of the XP-1’s performance promises should consider three crucial factors: Hyperion was founded nearly a decade ago by a team of PhDs exclusively focused on hydrogen-based power and delivery, and Hyperion works in conjunction with NASA to utilize technologies developed for space travel in commercial applications. Lastly, the organizers of the 24 Hours of Le Mans are planning to add a hydrogen-powered class by 2024, signaling that the element may play a vital part in the future of motorsports.

“Our vehicle represents the answer to ‘why hydrogen?’” says Angelo Kafantaris, Hyperion’s CEO. “It’s a no-compromise car that represents the best that hydrogen fuel-cell technology can be. Hydrogen is the cleanest, most sustainable energy source that’s not been properly utilized.”

The hydrogen-powered car will reportedly have a top speed of more than 221 mph.  Photo: Courtesy of Hyperion Companies, Inc.

For those who glazed over during chemistry class in high school, hydrogen molecules can unleash heaps of electrical power after a chemical reaction breaks them apart. That electrical energy can be stored in fuel cells in lieu of lithium-ion batteries, which are beyond heavy, require lengthy charging times, degrade over the lifecycle and can be expensive to recycle.

“We can store more energy, for the weight, than a battery-electric vehicle,” Kafantaris shares, “all while extending range and shortening refueling time.” Kafantaris, who holds a transportation design degree, understands that the experience of owning and driving a hydrogen-powered car must be identical to our current vehicular norms, and so he is hyper-focused on reducing pain points for those making the switch. “I’ve been driving hydrogen for five years and it’s identical to gas, with refueling. Very quick,” he says.

Among the larger hurdles to mass hydrogen acceptance is a lack of low-cost hydrogen fuel stations and the current inability to provide home fueling, for those used to plug-in electric vehicles. “It will take time to get the infrastructure right, but we want to give you all the benefits of clean fuel without any tradeoffs. The benefit here won’t be matching gas vehicles; it’ll be exceeding them,” Kafantaris says. To help educate consumers about those benefits, and showcase them, his team—including a cadre of ex-NASA engineers—worked for more than eight years to bring the XP-1 prototype to fruition.

Only 300 examples of the XP-1 will be made.  Photo: Courtesy of Hyperion Companies, Inc.

“It’s the ultimate sports car,” he says. “It’s got all the right tick boxes: speed, excitement and range.” Powered by twin permanently excited motors (both mounted in the rear), the XP-1 is all-wheel drive, with a 55 percent weight-bias towards the back and a top speed of more than 221 mph. Part of the car’s blistering speed is due to its carbon-fiber monocoque anchoring a chassis surrounded with aluminum and titanium components. The result is a car with a curb weight of less than 2,275 pounds.

Unlike battery-electric vehicles, which require constant temperature regulation to realize maximum performance, the XP-1’s hydrogen storage system is unaffected by the thermometer’s readout and is capable of peak performance while repeatedly turning competitive laps on a track or during prolonged, impassioned road outings. Those wraparound buttresses pull double-duty as active aerodynamic elements that bolster cornering at higher speeds but also act as solar panels that can actuate and move to better align with the sun.

First deliveries of the XP-1 are planned for early 2022.  Photo: Courtesy of Hyperion Companies, Inc.

Only 300 examples of the XP-1 will be made, but pricing and select power-train specs have yet to be announced. “With the XP-1, we’ll be inspiring first and then explaining how we’ll bring hydrogen mainstream,” notes Kafantaris.  A lot can happen between prototype and production but, if all goes to plan, future models—with various body styles—are in the Hyperion product road map.