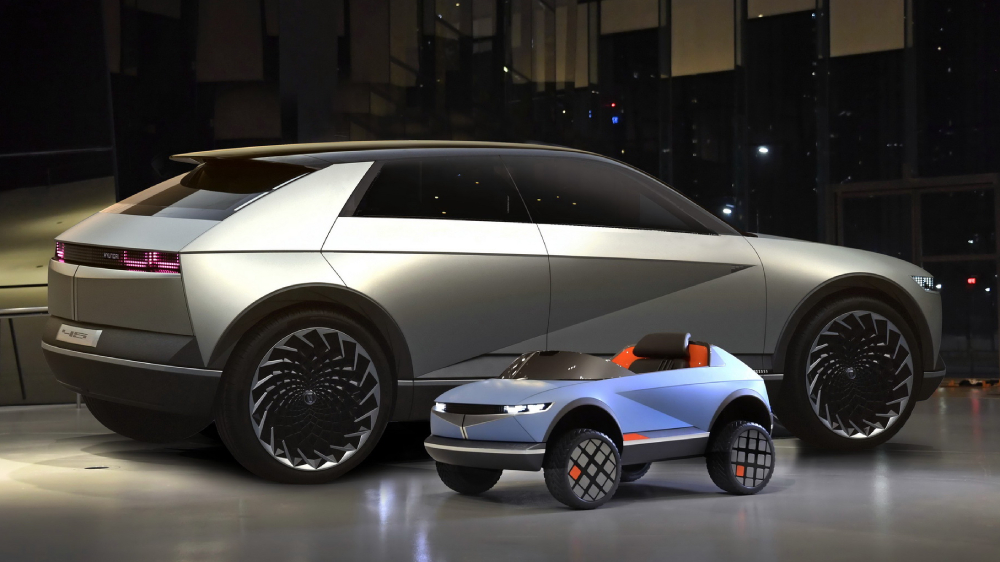 Hyundai may not yet be ready for its 45 electric vehicle concept to hit the road, but that’s not stopping the marque from making the vehicle into a kid-friendly miniature.

This pint-sized car does not have an official moniker, but that doesn’t prevent it from capturing all the futuristic stylings of its forthcoming larger cousin. It has the same faceted body (made from wood) and aerodynamic silhouette, and its centralized seat takes its nods from race cars. However, because this is for young children, it’ll top out at an easy 4.3mph. Measuring just over 4.5ft long by 2.6ft wide by 2.7ft high, it has a serene Performance Blue paint job with shots of orange detailing throughout.

But what truly sets this particular example apart from other models in the same category is what Hyundai calls Emotion Adaptive Vehicle Control (EAVC). This special technology is purported to read a child’s mood via facial expressions and make appropriate adjustments to the music and lighting. The driver’s vitals, including heart rate and respiration, are even measured via advanced sensors to officially blow your childhood Little Tikes coupe out of the water.

The full-size 45 concept car made its debut at the International Motor Show in Frankfurt last September. It derives its rather unusual name from the fact that 45 years separate its premiere and that of the Pony Coupe Concept. The more recent concept vehicle borrows from its predecessor in other ways, too, like its lattice radiator grille, which Hyundai refers to as a kinetic cube lamp design. The figure 45 also refers to the angle of degrees at the front and rear that give its overall silhouette a diamond-like appearance.

No release date or price has yet been disclosed, but we suspect it may be ready just in time for the holiday gift-giving season, and we couldn’t think of anything better to find under the tree.