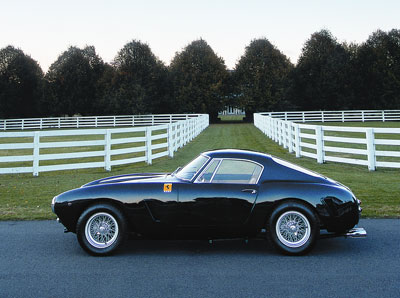 To discover why Ferrari ranks among the top automobile brands in the world, we traveled to Italy and spent time with two men: the son of company founder Enzo Ferrari and the designer, Sergio Pininfarina, who helped make Enzo’s marque famous.

Engines have captivated the 60-year-old Piero Ferrari for as long as he can remember. “My world changed the first time my father and I visited the factory,” he says. “We went out to dinner and then he took me over to the company. After that walk, I saw what I was missing: the tools. My passion was to touch them and understand them, to understand the pieces of the engine. I wanted to know how they were made, designed, built, and machined.”

Piero has touched almost every part of the company during a career that began in the mid-1960s in the endurance competition department. He worked as a problem solver for his father and then helped run the Formula One team. As a vice president of the company, Piero was one of the forces behind the championship-winning 333 SP endurance racecar in the mid-1990s. He has had a hand in developing a number of the company’s products, such as the F50 and 550/575 M. “When I look at where Ferrari is today,” he says, “back in the 1960s neither my father nor myself could ever imagine anything so big. It was really just a family business. Now Ferrari is a large company, an industry. The dimensions of everything are very different.”

The timeless designs of its cars are responsible in large part for Ferrari’s success, and Sergio Pininfarina is credited with many of those forms. Pininfarina’s father, Battista, handed him the Ferrari account when the family’s design firm, Pinin Farina, landed it in 1952. (Battista’s original last name was Farina. As the 10th of 11 children, he was given the nickname Pinin, a reference to his being the baby of the family. He officially changed his name to Pininfarina in 1961, but 31 years earlier, when he founded his namesake carrozzeria, Battista was Pinin Farina.)

Today, at age 79, Sergio Pininfarina is as active as ever, currently working with his son and Pininfarina president, Andrea, in the company while helping his hometown of Turin, Italy, prepare for the 2006 Winter Olympics. “The experience with Ferrari was the most exciting and the most difficult,” Pininfarina says. “When you create a convertible that goes 200 mph instead of one that does 100 mph, the technical problems are multiplied. We do extensive wind tunnel and computer testing today, but back in the 1950s the difficulty was testing the car on the road. For example, a windshield wiper that was smooth up to 100 mph may not have been good over 125. But we had to test 125 mph from behind the wheel.”

In addition to being the most famous automotive designer in the world, Sergio Pininfarina sits on Ferrari’s board of directors. His love of creating a car’s look and what he calls its personality is obvious and infectious. “In principle, every project is fascinating because I like the automobile,” he says. “But I must say that, from a personal point of view, I feel more excited, playing at home, when I have something to do with a GT or sports car like Ferrari. They are my favorite means of transportation. For use, and for the look, it is supreme, the ideal motorcar.”

Over the past five-plus decades, Pininfarina has created a range of stunning and influential shapes that have embodied the cultural climates of their eras. In the late 1950s, the Spyder California represented the optimism of the period and the mythical quality of the state that bore its name, while the 275 GTB could have come only from the mid-1960s. The late ’60s marked the arrival of the mid-engine 246 Dino, and the flamboyance of the 1980s was embodied in the Testarossa. Just as startling is this decade’s Enzo, one of the most technically advanced production cars ever made.

Beyond the look of its cars, the source of the Ferrari mystique is the marque’s racing heritage. Ferrari is the only manufacturer that has competed in Formula One since that first season in 1950. The firm’s recent dominance of F/1 is unprecedented, with six straight Constructor’s crowns from 1999 through 2004 and five Driver’s championships during the same period.

The racing technology filters down to the machines we can buy today. The steering wheel of the current 430 coupe or Spider contains the manettino, a control that comes from the Formula One cars and enables the driver to adjust the car’s driving characteristics.

In similar fashion, Ferrari introduced the concept of the paddleshift transmission in Formula One in 1989—creating a revolutionary change in motorsports—and now the feature is available in the company’s entire range of street cars: the aforementioned 430s, the 575M Maranello and Superamerica, and the 612 Scaglietti 2+2.

Equally important are Ferrari’s most visible features, for no other marque has such a rich tradition of coachwork. “The look of the car is an essential element for the success we have had throughout our history,” Piero Ferrari says. “Each model has a strong personality; you recognize immediately that it is a Ferrari. We have always produced cars with this type of persona.”

is a world-renowned automotive photographer and journalist who has written several books on Italian marques, including last year’s Ferrari Road and Racing (Publications International). Goodfellow serves as a judge at the annual Pebble Beach Concours d’Elegance.