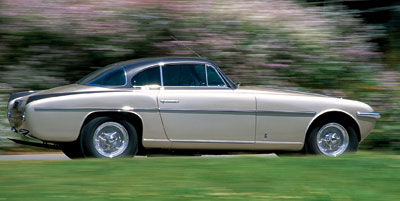 Because the company had won races from its earliest days in 1947, Ferrari became the chassis of choice throughout the 1950s and early 1960s. Designers and coachbuilders showcased their wares and could be certain they would catch the attention of the press and public alike. Custom coachwork Ferraris from that era remain rolling sculptures. Some represent a small series; others were a single car. These five—highlights of a design legacy that no other postwar manufacturer can match—are among the most stunning.

1953 375 America by Vignale: A period of extreme creativity, the early 1950s held an air of possibility: Everyone half-expected cars to fly by the 1970s. Jet planes influenced automotive design, and this spectacular prototype displays the theme of flight with a low roofline and small wings at the rear. Typical of designs sketched by stylist Giovanni Michelotti and built by Alfredo Vignale’s firm, the 375 America offers superb ornamentation, all seemingly done simply for the sake of art, to make the car look beautiful.

1954 Ferrari 375MM by Scaglietti:Sergio Scaglietti is most famous for championship-winning Ferraris such as the Testa Rossa and 250 GTO, but he also made this sensational one-off, one of the most beautiful Ferrari road cars ever. Created for film director Roberto Rossellini, it features simple lines and sparkling proportions that are arresting in their purity.

1955 375 America by Pinin Farina: The last of the 14 375 Americas was this design built for Gianni Agnelli. It is a testament to the diversity and talent of Pinin Farina, for the company’s designs typically displayed aerodynamic properties and thoughtful restraint. But this car has a unique look, with its upright regal grille and two-tone paint.

1956 250 GT by Zagato: The haunches over the rear wheels set off the design, while touches such as the two-tone paint, unusual rear window pillar, and traditional Zagato double bubble roof are superbly integrated into the overall shape.

“it is impossible and would be a mistake if we ever stopped racing,” says Piero Ferrari, son of company founder Enzo Ferrari. “No matter what formula, we have to race. To race is to be alive.” By racing the following cars and others, the marque has lived well.

1949 166 Barchetta: Barchétta means little boat in Italian, and the press dubbed this model as such because its styling was radically different from any previous cars. A Barchetta won Le Mans in 1949, and then several weeks later, the same car scored a victory at the Mille Miglia. The design influenced other carmakers well into the 1960s.

1951 340 America: Styled by Giovanni Michelotti and built by Carrozzeria Vignale, this one-off won the 1951 Mille Miglia when most of the 1,000-mile road race was run in the rain. Making the drive even more perilous was the car’s crumpled nose, which it had sustained in an accident early in the race. The victory demonstrated the strength of Ferrari’s V-12 and the talents of driver Gigi Villoresi.1957 315 S: Sergio Scaglietti’s stupendous coachwork on this brute of a machine was matched in brilliance by the car’s 360 hp, 3.7-liter V-12, which was the first Ferrari engine to use double overhead cams. Two 315 S models were built, and they played a pivotal role in Ferrari’s world endurance championship; this particular 315 was victorious at that year’s Mille Miglia.

1963 250 GTO: It is amazing what can be accomplished in a time of crisis. In 1961, Jaguar showed its new E-Type and captured the attention of a key member of Ferrari’s management. Once alerted, Enzo Ferrari turned to engineer Giotto Bizzarrini to create, in secrecy, a car that would best the new Jaguar, which Bizzarrini and his crack team did in a matter of weeks. The result was three world endurance championships, and perhaps the greatest car ever built.

2000–2004 F/1: At the beginning of the millennium, Ferrari had the right engineers and managers in place, and Michael Schumacher, the world’s best driver, was piloting the lead car. After winning the Constructor’s championship but narrowly missing the Driver’s championship in 1999, Ferrari and Schumacher went on an unprecedented tear, winning both titles each of the next five years.

Sliding behind the wheel of any Ferrari is a thrilling experience, but these five cars will leave your body buzzing with excitement for days after you remove the keys from the ignition.

1960 250 SWB: No car represents the Ferrari mystique as well as the 250 SWB. Made in a variety of guises, the SWB was designed for racing, winning, and driving home. A full-spec competition car with a lightweight aluminum body, grippy bucket seats, and a powerful engine, it placed fifth overall at Sebring in 1960 and was an absolute joy on the road: light as a ballerina’s slipper but so much more beautiful.1967 275 GTB/4 with Alloy Coachwork: Slipping under this classic roofline is like visiting your favorite tailor to try on a custom suit. A handful of the 330 275 GTB/4s came with lightweight aluminum coachwork, and those alloy body cars are highly prized by collectors—for good reason. Place the 300 hp, 8,000 rpm 3.3-liter V-12 in a package that seems to weigh less than a suit, and the result is a car almost as charismatic as the 250 GTO but costing less than one-tenth the price.

1996 FX:During the 1990s, the Brunei royal family ordered a number of custom coachwork Ferraris. The most exotic of the lot was the mid-engine FX. Based on the F512M, this car had carbon-fiber coachwork at a time when most enthusiasts had never seen the material. The leather was so soft it made a Rolls-Royce interior feel like vinyl in comparison, and that fabulous flat-12 engine was mated to a paddleshift transmission (before Ferrari offered this technology in its street cars). The thrust of the engine and the wail of its custom-made exhaust could haunt its driver for weeks.

2004 612 Scaglietti: The 612 Scaglietti is astounding in the way its dimensions seem to shrink when the car is pushed hard. Light and nimble, it can achieve speeds that make it easy to forget that there are two rear seats. Yet in day-to-day driving, it is so docile and refined that an unknowing driver might mistake it for a new model from Lexus.