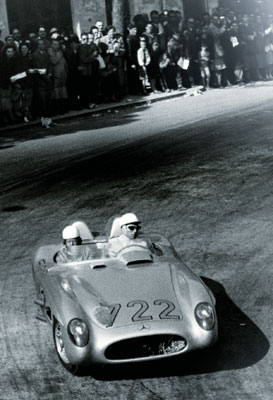 Sir Stirling Moss buckles the strap on his trademark white open-face helmet, adjusts his goggles, and settles into the tartan cloth seat of his classic Silver Arrow Mercedes-Benz 300 SLR racer. Head back and arms outstretched, the 75-year-old legend eases the shift lever into first, guns the 310 hp straight-8 engine, and powers away to the rapturous applause of thousands of onlookers.

It is early May, and Moss has returned to the northern Italian town of Brescia to celebrate and to be celebrated. In 1955, exactly 50 years earlier, he had stunned the racing world by winning the grueling Mille Miglia road race in a time previously thought unachievable. For 10 hours, 7 minutes, and 48 seconds, alongside codriver and journalist Denis Jenkinson, Moss averaged 97.96 mph, driving virtually nonstop at speeds as fast as 175 mph, on public roads—no barriers, no seat belt, parting the crowds as he approached like Moses at the Red Sea.

“I have to say I never liked the race,” Moss says. “I was scared witless for most of the time—driving in the dark, in the rain. There were 700 to 800 starters, and the competence of many of the drivers wasn’t great. Coming up behind them, we were often doing 100 mph more than they were, hoping they’d see us and move over. But I loved it when it was over, and I loved it even more when no one beat my record. It was without doubt the most satisfying and most surprising victory in my career.”

Since that day in 1955, Moss has been linked inseparably with the three-pointed star. Although he competed for Mercedes-Benz for just one season—the company withdrew from  racing at the end of 1955 to concentrate on passenger car development—his involvement elevated Moss into motor sports’ major league.

He had begun racing at age 17 in local speed trials, won his first race a year later in 1948, and in 1949 earned the first of three consecutive Formula 2 British champion titles for single seaters. He made his first works drive in 1950 for the British team HWM, and by 1954 was challenging Formula One’s best in his own Maserati.

The skill and bravery of the then-24-year-old Moss did not escape the attention of Alfred Neubauer, manager of the newly reformed Mercedes-Benz race team, who asked Moss to fly to Hockenheim, Germany, for a test in the thundering Mercedes W196 Formula One racecar. His performance earned him an offer to join the team for the 1955 season as the number two driver behind Juan Manuel Fangio, the reigning world champion. Stirling Moss had arrived.

“What really impressed me from the outset was the team’s attention to detail,” recalls Moss. “As I clambered out of the car after the Hockenheim test, rummaging in my pockets for a rag to wipe my oily face, a mechanic suddenly appeared bearing hot water, soap, a flannel, and a towel. This was out there in the middle of the desolate Hockenheimring. I thought there and then that to be associated with such an organization could not be at all bad.”

Driving the W196 in 1955, Moss won the British Grand Prix, came in second in the Belgian Grand Prix and the Dutch Grand Prix, and was leading the Monaco Grand Prix until a mechanical problem sent him to the pits with six laps to go. He finished the season as runner-up to Fangio.

But behind the wheel of the Mille Miglia–winning 300 SLR—essentially a rebodied version of the W196—Moss best demonstrated his skills. He took first place in the Tourist Trophy at Dunrod in rural Ireland and in the treacherous Targa Florio around the mountains of Sicily. “What was the SLR like to drive? It was a big, heavy car and not an easy one to handle,” says Moss. “It was hard work, particularly for 10 hours. When you get a large mass like that moving, it’s not easy to get it to change direction.”

The car was dependable, however, and it was built like a tank, a fact to which Moss’ race diary for the Mille Miglia alludes: “Had a shunt at Pescara and also Piacenza. Went into a ditch on the Radicofani. Otherwise all OK. Took off on a bridge at 270 kph [168 mph].”

Fifty years later, Moss still is in awe of the Mercedes team’s technical prowess, particularly that of chief engineer Rudolf Uhlenhaut. Moss remembers driving around the Monza racetrack in Italy when a stone shattered the small air-deflecting windshield of his W196 racecar. “The first time the team knew about it was when I pulled into the pits pointing at the missing screen,” says Moss. “Thirty-nine seconds later, I drove away with a new glass fitted. That was impressive. But even more impressive was that for the next race, they had redesigned the screen so that if the same problem arose, you’d push a button and a flat piece of metal popped up to replace it.”

Moss’ racing career ended abruptly on April 23, 1962. While he was racing at Goodwood, his Lotus Climax inexplicably ploughed straight into an earth bank, leaving Moss unconscious for 32 days and paralyzed for six months. A year later, he decided to retire from racing. But his status as one of the world’s greatest drivers already had been secured. He had won 16 World Championship Formula One races, drove 84 different makes of car to 222 victories in 506 races, and was runner-up in the F/1 World Championship four times.

Today, Moss is busier than ever, taking part in vintage rallies, giving speeches, and keeping the magic of his Mille Miglia win alive. “Back in 1955,” he says, “if you were driving a Mercedes-Benz, other drivers weren’t thinking of winning the race; they were hoping to be the first non-Mercedes to the finish line. There was no better car on the track.”