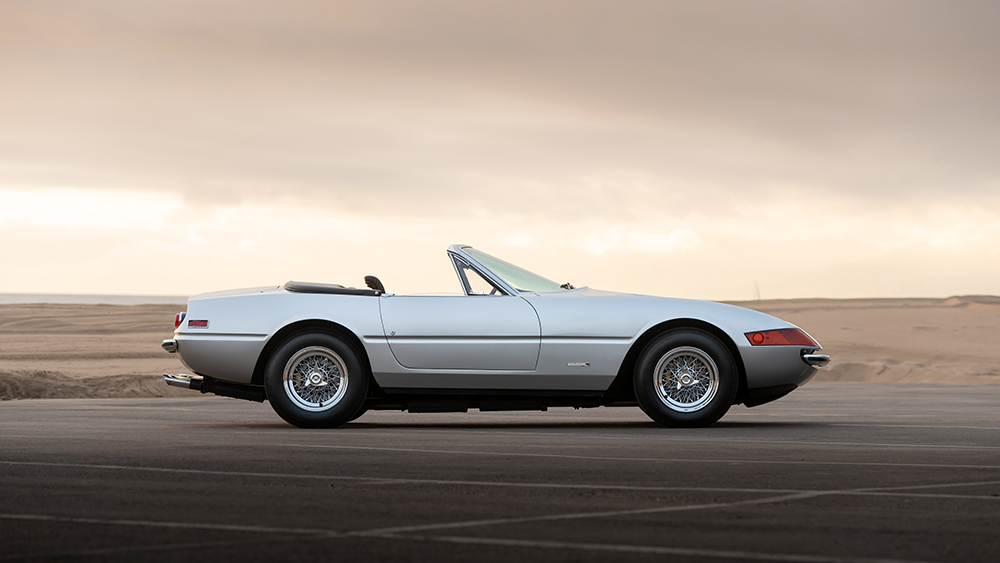 And… action! A blockbuster Ferrari previously owned by Hollywood royalty is ready to join your collection.

The Prancing Horse in question is a pristine 1971 Ferrari 365 GTS/4 Daytona that once belonged to the late, great filmmaker Sydney Pollack. The vintage four-wheeler, which has just been listed for private sale by RM Sotheby’s, represents the pinnacle of Italian engineering and comes with a dramatic backstory worthy of the big screen.

The model has a rare Argento Metallizzato exterior over a Nero interior.  William Walker/ RM Sotheby's

Named after the marque’s 1-2-3 podium finish at the 1967 Daytona 24 Hours, the Ferrari Daytona, officially designated the Ferrari 365 GTB/4, was first introduced at the Paris Auto Salon in 1968 to replace the 275 GTB/4 and give drivers even more power. The two-seat grand tourer was fitted with its predecessor’s classic Colombo V-12 that was further bored out to 4.4 liters and mated to a five-speed manual transmission. Complete with an equally aggressive shark-nosed body penned by Pininfarina’s Leonardo Fioravanti, the Daytona was an instant hit. As such, the automaker followed up with an open-top variant that it introduced at the Frankfurt International Auto Show in ‘69.

This particular Spider is one of only 121 that were produced by Scaglietti in the scant three-year production run between ‘71 and ‘73. It is also one of just 14 models to be finished in Argento Metallizzato paint over a Nero interior, which is a nice departure from the signature Rosso red. The rarity was first purchased by Ferrari enthusiast H.J. Hoff in ‘72, before it was acquired by Pollack three years later in ‘75. The acclaimed director, producer and actor, who had a prolific career spanning some 50 years, held onto the car for a couple of years while he was at the peak of showbiz.

The car has a Colombo V-12 that bored out to 4.4 liters and mated to a five-speed manual transmission.  Robin Adams / RM Sotheby's

In 1979, the Ferrari was purchased by Alberto Amezcua of Mexico City, who was later strong-armed into selling the car to the owner of a local pawn shop loosely connected to the Mexican president. The Daytona eventually resurfaced in the States in ‘83 and was rightfully returned to Amezcua, who kept the car for another decade. It changed hands a few more times before ending up with a caring collector in ‘99, who commissioned a show-quality restoration by Vantage Motor Works.

Today, the Daytona is presented in mint condition with its original paint scheme and a mere 40,150 miles on the dial. As for price, the car actually went under the gavel last weekend at RM Sotheby’s Arizona auction with a high estimate of $2.8 million, but didn’t land a buyer. You can contact the auction house directly to make an offer.

Check out more images of the sweet ride below: