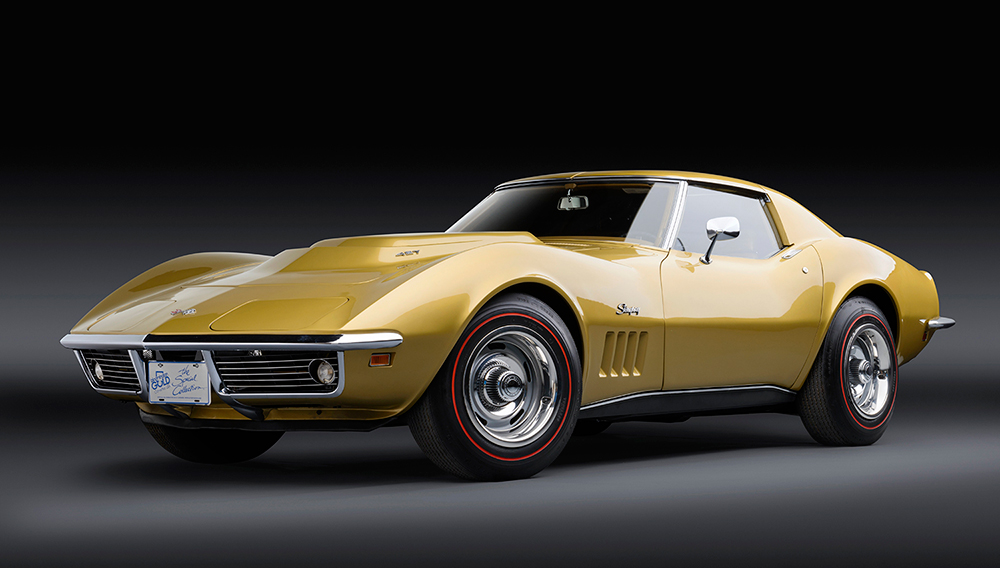 Restlessly transformed into a serious high-performance car soon after its introduction by Zora Arkus-Duntov and his Corvette Engineering team, the second-generation Corvette Sting Ray represented much of Duntov’s race-oriented thinking. Carroll Shelby’s Ford-powered Cobras began hitting the track around the same time as the new Corvettes and while Shelby’s upstarts were hardly “true” production cars, Duntov never wavered in his quest to keep the Corvette on top. Not even GM’s corporate racing ban of 1963 and the resulting cancellation of Duntov’s promising Grand Sport Corvettes could stop him from developing the definitive Cobra killer – the thundering L88.

Launched in late 1967, the L88 option created much confusion among Corvette enthusiasts with its laughably conservative 430-horsepower rating and stiff pricing making the L88 seem less powerful at twice the price of the former top L71 427/435 Tri- Power unit In fact, the L88 produced well over 500 pomes — stock. Chevrolet’s disinformation campaign actively discouraged L88 sales to customers who were not professional racers and in company literature, Chevrolet cryptically declared the L88 Corvette an “off-road vehicle.”

Redlined at 6,500 rpm but capable of higher revs, the L88 engine utilized a four-bolt main cylinder block with forged internals, topped with lightweight high-flow aluminum cylinder heads that improved the Corvette’s front/rear weight bias and handling. Other highlights included a big Holley four-barrel carburetor, 12.5:1 compression, and a bulged hood with functional cold-air induction. The tough M22 four-speed and heavy-duty Turbo 400 automatic were available with the L88, along with numerous rear-axle ratios, while air conditioning, power steering, electric windows, and a radio, were not Instead, L8B buyers were required to select mandatory options including J56 heavy-duty brakes, F-4I special suspension, K66 transistorized ignition, and G80 Positraction differential.

Just 20 L88-equipped Corvettes were built in 1967, followed by 80 more for 1968 and another 116 for 1969. Their combination of incredible power with the Corvette’s sleek body, stout drivetrain, and excellent suspension made these cars capable of exceeding 150 mph off the showroom floor and with minor tweaks, 11-second quarter-mile times were easily reached. Soon, L88 Corvettes dominated the drag strip, road races, and clandestine late-night speed contests, with many of the era’s top L88 racers including Tony De Lorenzo, Don Yenko, and Dick Guldstrand. As a result of their brilliant performance and extreme rarity, L88 Corvettes rank among the most desirable and valuable high-performance automobiles among today’s collectors, routinely commanding premium prices. However, all are not equal, and this very special L88 Corvette from 1969 is unquestionably one of the finest in existence.

Never restored, almost totally factory-original, and stunning in Riverside Gold with Saddle vinyl upholstery, this 4-speed 1969 L88 Corvette Coupe is very well-known among Corvette experts as quite likely the lowest-mileage example in existence, with only an approximate 2,600 documented actual miles from new. It is also a benchmark of originality for Corvette historians and restorers, retaining the totally original interior, including the factory warning sticker demanding use of 103-Octane fuel and an estimated 90 per cent of its factory-applied paint today. Already rare as one of the 116 L88s for 1969, this car is far more so as one of just 10 produced with the 4.56:1 rear differential.

Prior titles document the Corvette’s full provenance, dating from first owner Raymond Butler, a Corvette Club of Michigan member, who accumulated the majority of die vehicle’s low mileage during the summer of 1969 and tested its capabilities in autocross, slalom, and drag racing, with the car clocking wicked 11.7-second ETs in the hands of another driver. Some rub marks remain at the rear of the car, die result of the slicks used at the drags. Mr. Butler stored the L88 soon after, eventually selling it in 1972 to fellow Corvette Club member Dave Davies, who attracted so much attention from the Redford, Michigan police on one outing, that he never drove the car again, eventually selling it to Werner Meier in 1975, who did not use the car until he attended the “L88 Earthquake” in 1988 at the Bloomington Special Collection, adding just 9 miles to the odometer. Eventually in 2000, Mr. Meier sold the Corvette to Jim Mattison, the founder of Pontiac Historical Services, through whom the car passed in 2006 to a prominent private collection in Northern California and then most recently, the Consignor.

In addition to forming part of the Bloomington Gold Special Collection in 1988, this “time warp” L88 Corvette was inducted into the Bloomington Gold Hall of Fame in 1998; in 2003, it was invited to the Bloomington Gold Special 50th Anniversary. In 2005, it earned NCRS Top Flight certification. Additionally, it has been displayed at venues including the Domino’s Farms Museum and the famed Gilmore Car Museum in Hickory Comers, Michigan. Blessed with full provenance from new, this amazing L88 is offered complete with a wealth of documentation including the original window sticker, GM Protect-O-Plate, warranty booklet, and the all-important tank sticker remaining on original fuel tank, which was carefully removed for preservation and accompanies the sale of the car. As one of the most significant Corvettes ever built and remaining today, it stands as quite likely the best and most original L88 in existence and available today.