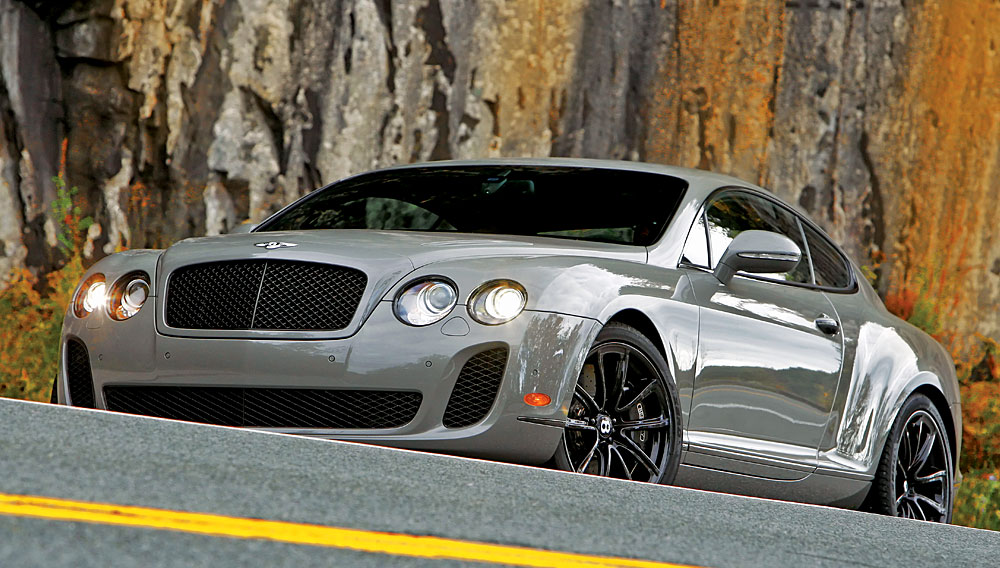 Those with a wicked appreciation for both irony and understatement have, from the outset, savored Bentley’s Continental GT as the perfect stealth supercar. Endowed with an unimpeachable pedigree, a purposeful shape, and an exquisite interior, the grand tourer from the Crewe factory in England is also as sturdy as a rhinoceros and even more powerful. Given this, drivers for whom the car’s 544 hp furnishes sufficient excitement may wonder why engineers on the Bentley team have decided to push the limits of performance—and decency—in an automobile that already possesses heavyweight credentials. But judging by the model’s rapid evolution over the past seven years, the word sufficient simply is not in the vocabulary of the engineers at Crewe.

Following its launch in late 2003, Bentley’s Continental GT became a mainstay of drivers looking for a well-mannered powerhouse that combined stunning performance with real-world ergonomics and practicality. By 2006, those clamoring for a convertible got the diabolically fast GTC, which proved that a proper canvas-top drophead could still make a civilized grand touring car.

In 2007, the Continental GT received an injection of added oomph with the GT Speed. Two large air inlets flanking the oversize lower air intake beneath the signature Bentley grille visually distinguished the “plain” Continental (an oxymoron in the extreme) from its Speed-equipped sibling. The Speed package (later available with the four-door Continental Flying Spur and the GTC) increased the output of the twin-turbocharged W-12 engine to 592 hp and gave the vehicle sportier handling.

This combination mollified speed junkies for a time; but clearly, some have grown restless. The new 2010 Continental Supersports scratches a velocity itch verging on the indecent. In this latest and most extreme iteration of the Continental (base price $267,000), more power naturally has been called for, and more has been delivered. While the 5,998 cc displacement remains unchanged, output has increased by 21 hp over the Continental GT Speed to 613 hp; and the torque, which is available from 1,700 to 5,600 rpm, has been upped from 553 to 590 ft lbs.

But Bentley’s new offering delivers more than speed; it also introduces to the super-luxury, high-performance segment a new take on the “green” concept. The Supersports—and the Supersports only—incorporates new FlexFuel technology, which allows the engine to run on unleaded Premium or pure ethanol, as well as any combination of the two.

Why ethanol, and why now? Bentley believes that alternative fuels like ethanol may be the future of world motoring. Though not as efficient as gasoline, ethanol at least burns cleaner. Brazil is the leader in ethanol production and already uses ethanol to power most of its cars. And as reliance on Middle Eastern oil becomes a more tenuous proposition, homegrown fuel like ethanol—made from biomass such as corn or higher-yielding sugarcane—could become a much more attractive and necessary alternative in the future. In fact, by the end of 2012, technology similar to that found in the Supersports’ ethanol-friendly engine—developed with consultation from British Petroleum—will have the ability to power all Bentleys worldwide.

Because the power output of engines configured to run on ethanol is typically reduced relative to that of their gasoline-based counterparts, Bentley’s chief engineering challenge centered on ensuring that the FlexFuel powerplant could deliver absolutely seamless performance regardless of fuel type or mixture. Moreover, changes to the fuel system, gaskets, and hoses—as well as metallurgical modifications and coatings on components such as valves, pistons, and combustion chambers—were necessary to prevent the ethanol combustion process from damaging the engine.

The prodigious power on tap from the green machine requires a heavy-duty transmission. Thus, Bentley’s engineers chose to enlist the tried-and-true ZF 6HP26 six-speed automatic, which they remapped to exploit the added performance of the Supersports. Like a manual transmission, the six-speed can be shifted from the console or by using the paddles; still, in true automatic mode, the upshift and downshift are executed in lightning-fast sequences that would satisfy even the most demanding Formula One fan.

Most traditional sports and luxury autos these days are driven by the rear wheels alone. As with every other Continental model—and many Bentley corporate siblings, including most Audis and all but one Lamborghini—the Supersports utilizes full-time all-wheel drive to maximize power and control in all weather and road conditions. While other Continentals divide front and rear responsibilities evenly, the ultra-performance Supersports delivers 60 percent of its power and torque to the rear wheels.

The Supersports’ braking system mates massive eight-piston front calipers to enormous carbon-ceramic rotors that, at 16.54 inches in diameter, are the largest available on any production automobile. The rear assembly pairs four-piston binders with 14-inch carbon-ceramic rotors. Holding a ceramic rotor in one hand and Bentley’s standard, steel equivalent in the other makes the weight-saving benefits of the former readily apparent. And as drivers on a racetrack quickly discover, ceramic rotors should not be considered optional when stopping fast and often is not.

The Supersports distinguishes itself audibly with an exhaust system that tries its best to mind its manners. But Bentley Boys will be boys, and downshifting or mashing the throttle hard unleashes a hellish bellow—or a heavenly one, depending on your predilections. Simply put, the sound is glorious.

Exterior styling preserves the shape that makes the Continental GT such a classic of modern design. Clearly derived from Continentals past (the benchmark profile of the 1952 Continental makes that Bentley among the most beautiful post–World War II automobiles), the Supersports races into the present with more aggressive details than those that adorn its stablemates. Bulging rear fenders increase the track and width of the back end, while the front end is dominated by two capacious air intakes on either side of the front and lower grille that gulp great quantities of air into the oil coolers. On the hood (or “bonnet” to Britons), two exhausts expel hot air from the engine compartment, which requires quick dispersal of the greater heat generated by the added horsepower that takes the Supersports to 204 mph. Indeed, this fastest Bentley ever requires an enhanced rear-spoiler lip. A pop-up wing at the base of the rear window generates downforce at speed. The 20-inch aluminum rims are wrapped with Pirelli Ultra-High Performance tires, which were designed specifically for the Supersports and are the only tires recommended for use on the car. The dark smoked-steel trim on the windows, rockers, grilles, and wheels is finished with the same state-of-the-art vapor-deposited coating used by the builders of racing engines, some high-tech watchmakers, and other manufacturers requiring an ultra-durable, attractive finish.

These innovations notwithstanding, an intriguing attribute of the Continental Supersports is its weight—or relative lack thereof. While hardly svelte at 4,939 pounds dry, the new Continental flagship is 243 pounds lighter than the GT. Much of this weight has been dropped from the interior, which will not disappoint Bentley purists who enjoy the marque’s blend of luxury and performance. The Supersports reduces its burden with manually adjusted sport seats that are 99 pounds lighter than the GT’s opulent electronic thrones. In place of the backseats, which have been jettisoned altogether—reducing heft by 57 pounds—is a shelf with a carbon-fiber brace to hold luggage in place. Many hard surfaces are covered in meticulously finished carbon fiber, with upholstery in Alcantara and leather detailed with quilted stitching. In true Bentley tradition, however, drivers may specify any combination of interior materials and colors to suit their tastes; and, of course, the exterior paint options are nearly limitless.

interestingly, bentley chose to launch the new Continental Supersports at the Hotel Fauchère in bucolic Milford, Pa. The subtlety of this decision is not lost on those who understand the Bentley persona. The hotel was founded in 1852 by Delmonico master chef Louis Fauchère, and its 16 rooms have been lovingly restored by owners Richard Snyder and Sean Strub, whose vision combines original 19th-century charm and elegance with modern amenities. The sight of a St. James Red Supersports on the fastidious rear lawn of the historic hotel seems inapposite, until one recognizes that both Bentley and building have been lovingly constructed to the highest standards—by hand.

Despite cutting-edge technology, each Bentley remains a handmade British automobile. One imagines that German chairman and CEO Dr. Franz-Josef Paefgen—former head of Lamborghini and a 30-year veteran of Volkswagen Group management—has Bentley blood in his veins. The crew at Crewe enjoys a great deal of autonomy in the development of the entire Bentley model line. Bentley enthusiasts are not the only individuals dedicated to the winged-B marque: The 4,000 people who work at Bentley are hugely devoted to the company’s cars and heritage. Although some robots are used, for instance, in measuring gap tolerances, the real work of building a Supersports is left to experienced craftsmen, some of whom have spent more than one-half century at Crewe.

As the Supersports burbled through Milford and adjacent townships during the launch event—its genteel comportment betrayed only by an occasional blip of the throttle—we test-drivers realized this car could be enjoyed even at the most tranquil speeds. But our roughly 30-mile route led to the Monticello Motor Club, a members-only track about 90 minutes from Manhattan, where we would have the chance to exercise this bestial Bentley at a far brisker pace.

Storming around the track at Monticello, one imagines the Supersports to have been sired by the bull rhino it embodies. Car and ungulate, however, have more than their two-and-one-half-ton weight in common. Both possess a rare dexterity and finesse that belie their mass. The Supersports is clearly a descendant of the mighty blower Bentleys of the 1920s and ’30s that created such a ruckus in competition under the aegis of company founder W. O. Bentley, whose cars rival Ettore Bugatti disparagingly referred to as “the world’s fastest lorries.” Of course, this Bentley is anything but trucklike; yet performance is meted out with Freightliner torque at low, lazy revs with a powerband as flat as Kansas. Torque like this spoils a driver and makes high-revving power plants with more horses than pounds-feet seem altogether too much work. Even aggressive driving can be done in the Supersports’ automatic mode, while exploiting the car’s flat cornering, unruffled stability, and surgically precise steering feedback.

The Continental Supersports’ civilized, quiet cabin and hard-hitting performance remind us that this car is a study in contrasts—an extreme Bentley that can be enjoyed by many but truly appreciated by only a few. Those whose penchant for engineering and performance is matched by an appreciation of fine craftsmanship and purposeful luxury will embrace Bentley’s understated overachiever. But be warned: Like a romping rhino, the Supersports skirts the limits of decent behavior and, now and again, gets the urge to charge.