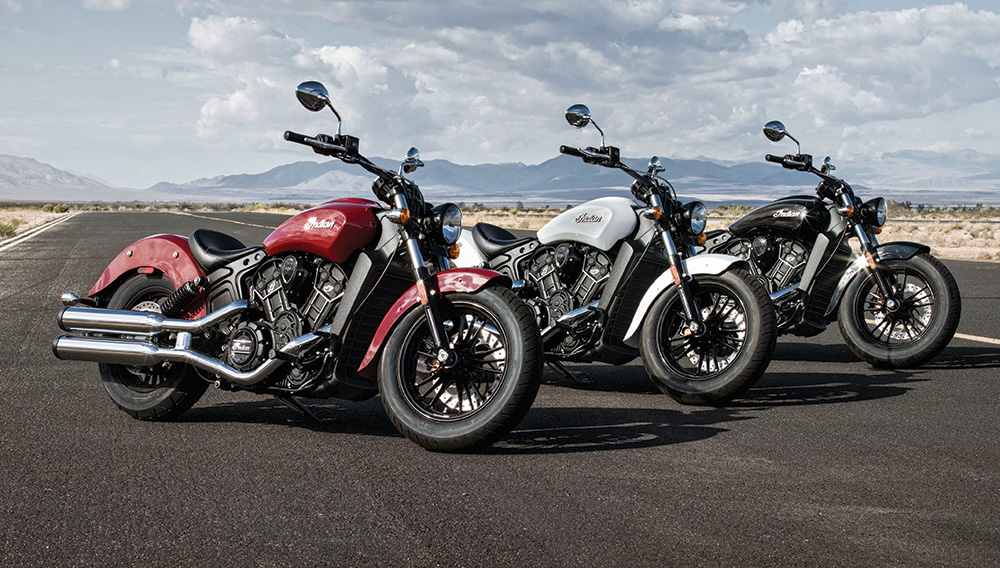 Indian Motorcycle, the first American motorbike manufacturer and a mainstay of the motorsport for the first half of the 20th century, has been going full-throttle since its return in 2013—and the new 2016 Indian Scout Sixty is the latest feather in its headdress. Based on the popular Scout model that debuted at the Black Hills Motor Classic in 2014, the 542-pound Scout Sixty has the look and feel of the latter, while being friendlier to first-time riders.

Still a powerful performer, the 999 cc midsize features the Scout’s same chassis, suspension, and brakes, but holds 22 fewer horses than its bigger brother. Equipped with a 78 hp, V-twin engine that produces 65 ft lbs of torque, the latest in the line carries a 5-speed transmission that is simple and seamless to shift. And a seat height of 25.3 inches keeps the center of gravity low to help with handling. Available in the brand’s Thunder Black, Pearl White, or signature red, the bike can also benefit from a selection of over 200 accessories to fine-tune customization. After all, the freedom of individuality has been the backbone of the brand, even if its own identity has been in flux through the years.

Established in 1901 by bicycle racer George Hendee and engineer Oscar Hedstrom, the company sold its very first motorcycle—equipped with a chain drive and a single-cylinder engine—the following year, and by 1905 had developed its first V-twin version. Soon dominating the market, the bikes became renowned for their reliability, racing victories, and record-setting prowess, such as Erwin “Cannonball” Baker’s coast-to-coast cruise of 11 days, 12 hours, 10 minutes in 1914. When WWI hit, however, Indian focused on outfitting the U.S. military with almost 50,000 motorcycles, leaving very little inventory for the public—a demand that Harley-Davidson was happy to supply. After the armistice, Indian got back in gear with three primary models—the Scout, Chief, and Four—which it rode to prosperity until WWII. This time, Harley-Davidson was the military’s main two-wheeled transport, but Indian was unable to fully capitalize in the civilian market due to power shifts in shareholders and sweeping management changes that led to less-successful, war and postwar product lines. By 1953, all production had sputtered to a stop.

Subsequent decades would see various incarnations of the brand represented by repackaged Royal Enfields from Britain or other bikes from Asia and Europe. The Indian brand, however, kept racking up records, thanks to New Zealander Burt Munro’s frequent pilgrimages to the Bonneville Salt Flats in Utah through the Sixties. Riding a modified 1920, 600 cc Scout, Munro reached a speed of 184 mph in 1967—a world land-speed record for streamlined bikes under 1,000 cc that has yet to be broken.

In 1998, original production began again in Gilroy, Calif., under the name Indian Motorcycle Company of America, but that too stalled by 2003. Next, London-based Stellican—a private equity firm—revved up production of the Chief before selling Indian to Polaris Industries in 2011. The snowmobile and all-terrain-vehicle manufacturer immediately kick-started development of the Thunder Stroke 111 V-twin engine and the models it would power. The new line debuted at the Sturgis Motorcycle Museum & Hall of Fame in 2013.

To commemorate the brand’s resurrection and recognize its rich history, Indian also has created four one-off tribute bikes comprising the Scout Custom Series launched last year. First to be developed, the Wall of Death Scout was introduced at its namesake attraction in Sturgis, where stunt riders defy gravity as they motor horizontally around the barrel-like stage. Soon after came the USO Scout, an homage to Indian’s military contributions. Dressed in army green, it is appointed with leather accessory bags and a gun scabbard by the front fork. And to celebrate Munro’s accomplishments at Bonneville, the Black Bullet Scout features an aerodynamic, ammunition-shaped fairing and a bare-bones frame.

Last month, Indian announced the latest in its singular series, the Black Hills Beast. Hearkening back to classic hill-climbing competitions and the bikes they inspired, the over 100 hp machine marries many of the industry’s leading component companies. The collaboration includes Aeromach floorboards and heel shifters, Dobeck Performance engine tuning, a BTRmoto swingarm and chain, and a Traxxion Dynamics front suspension. All four custom bikes will be showcased at the Progressive International Motorcycle Shows touring the nation from October through February.

On November 18, the Indian Scout Sixty was revealed at the EICMA International Motorcycle Exhibition in Milan, Italy, where it was announced that distribution to dealers is underway. Three days later, five of the bikes (customized by Roland Sands Designs) competed in the “Super Hooligan” class at the Superprestigio of the Americas in Las Vegas—one taking third place and three others finishing in the top 10. But whether competing or cruising, the Scout Sixty is sure to be a crowd pleaser, especially at a starting price of $8,999. (indianmotorcycle.com)