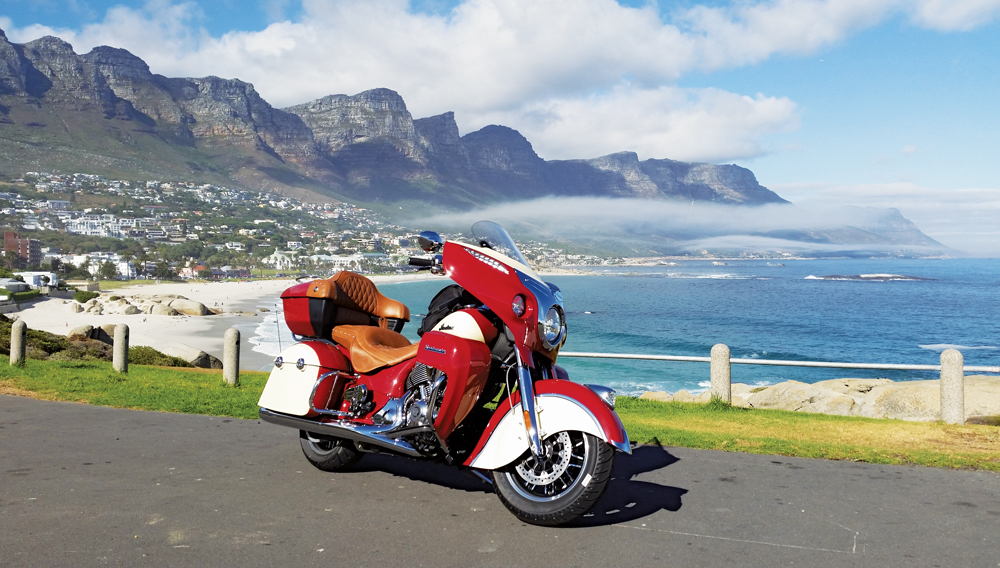 An hour into a 10-day journey across South Africa, the Indian Roadmaster full-dress tourer was already proving its prowess as it powered up the cliff-side curves of Chapman’s Peak Drive, a highway at the southwestern extremity of the continent. When the floorboard scraped the pavement, it was a signal to ease off the throttle and reduce the bike’s lean on the switchbacks. The 1,811 cc V-twin Thunder Stroke engine adjusted smoothly, enabling the bike to effortlessly trace the coastal road as it crested and dipped down to Hout Bay on the Atlantic coast, about 12 miles south of Cape Town.

The scenery evoked California’s Big Sur, with clouds pouring over sheer mountain faces in slow-motion waves, and breakers crashing on the wind-scoured beaches below. There was a chill in the air, but seated in the heated saddle and behind the bike’s wraparound fairing, I barely noticed it.

South Africa is an Eden for big-bike riders; I would pass dozens of BMW GSAs and Harleys as I covered the 310 miles from the Taj Cape Town hotel (a granite structure built in 1932 as a bank) to the coastal resort of Knysna. And the Roadmaster, with its tapered art deco lines and gorgeous cherry-and-cream paint job, would draw double takes from most of the riders.

The original Indian Motorcycle Company, which was based in Springfield, Mass., built some of the most comfortable and attractive bikes of its day before shuttering in 1953. The brand went through a series of resurrections and owners until 2011, when it was acquired by Polaris Industries, which is the parent company of Victory Motorcycles. Polaris relaunched the Indian marque in 2013 with the Chief standard model and the Chieftain bagger.

The Roadmaster, which was developed before the Chieftain but introduced after it, in 2014, includes such additional features as the aforementioned heated seats, a trunk, front fairing lowers, heated grips, LED headlights, passenger floorboards, and a rear tip-over bar. Priced at just under $27,000, the Roadmaster is the flagship of Indian’s retro-looking lineup, offering eye-catching looks and enough comfort to stake a claim as the ultimate long-distance tourer.

This baby rhino of a bike continued to lap up the miles on the coastal highway before reaching the Phantom Forest Eco-Reserve outside of Knysna in time for sundown. The lodge was named Africa’s Leading Green Hotel by the World Travel Awards three straight years, from 2010 through 2012. It overlooks the Knysna River Estuary, which is home to fish eagles and the endangered Knysna seahorse. The property’s suites are set in a forest of gnarled trees, on slopes that are often steeped in mist.

Vervet monkeys scampered across my suite’s roof and trailed me to the hotel’s lantern-lit restaurant. The restaurant’s rustic appearance is not indicative of the menu. A dinner can include Moroccan-spiced ostrich carpaccio with griddled eggplant, and a pistachio-chocolate tartlet with pomegranate-white-chocolate sauce. The menu exemplifies what Phantom Forest chef Robyn Stein calls South Africa’s “rainbow cuisine,” which combines local produce with multicultural “creativity and sensation.”

From Phantom Forest I headed east toward Port Elizabeth on the Garden Route—the scenic stretches of the N2 and other roads that run from Mossel Bay in the Western Cape province to the Storms River at the western edge of the Eastern Cape province. In this wilderness of dense subtropical thicket, there is not a town for miles, and service stations are as rare as the Knysna seahorse. The Roadmaster, which is equipped with a 5-gallon tank and has a 185-mile range, was cruising on fumes before reaching a fuel stop outside of Humansdorp, a small town at the west end of the Eastern Cape.

The next stop was the Gorah Elephant Camp, a Hunter Hotels property in Addo Elephant National Park that houses guests in 11 tented suites. The park covers 447,000 acres of wilderness, making it South Africa’s third largest. It is also home to one of the world’s densest populations of pachyderms.

Near the beginning of the dusty dirt road that leads to Gorah, a tusker lumbered out of the bush. While I cast a long stare sideways at the elephant, the Roadmaster’s front tire dug at a rut—a jolting reminder that this bike is not designed for off-roading. When a warthog dashed across my path, I felt a rush of adrenaline—or maybe panic—and wondered whether the Roadmaster’s torquey V-twin would do the job if I needed to outrun a lion.

Motorcycles are not allowed at Gorah, so I parked the bike at the entrance and traveled by 4×4 to the camp’s main lodge. The former Victorian farmstead is extravagantly appointed with animal heads and antiques; hartebeests and eland graze in the meadows beyond the lodge’s columned veranda. As I settled into a leather sofa with a glass of wine in hand, a flock of ostriches strutted past.

The camp’s suites sit on stilts around the lodge, connected to it by a boardwalk. Their glazed hardwood floors are raised high enough to keep guests safe from the wildlife roaming the grounds.

At sunrise the next day, the phone rang. Werner Le Roux, the camp’s safari guide, was on the line. “Good morning,” he said. “This is your morning safari wake-up call.” Minutes later the phone rang again. “Please stay inside your tent,” Le Roux said. “Three hyenas have been spotted heading your way.” I peeled back my curtain, and sure enough, there were the hyenas, hunched and menacing, creeping past my front door.

After the hyenas had departed and it was safe to leave my tent, I heard a ghastly growl coming from somewhere—I could not pinpoint the direction or the distance. The gravelly moan sounded like rolling thunder. My nerves tingled as I hurried down the boardwalk to the lodge, and there I saw the source of the sound: A lioness was having a drink at the watering hole.

Two days after arriving at Gorah, I was back on the bike, bound for the Great Fish River Lodge, which sits atop a high riverbank in the Kwandwe Private Game Reserve. I followed the 4×4 that met me at the reserve’s entrance, running the Roadmaster hard in the other vehicle’s dusty wake and passing a menagerie of Africa’s finest along the corrugated dirt road to the lodge.

“Are there lions?” I asked when I arrived.

Thankfully I was in one of the lodge’s safari vehicles—and not on the Roadmaster—the next day when we came upon two lionesses hidden in the shade on the road. Later in our drive, at sunset, we received a call alerting us to a lion kill. As I watched three giant cats tear apart an eland under a bloodstained sky, I considered how, mounted on my Roadmaster, I could be mistaken for an antelope.

I could not shake that thought when the road to the Bucklands Private Game Reserve brought me to a huge metal gate and a tall, electrified fence that looked like it came from a Jurassic Park film. Just past the entry to the reserve was a sign that read: “Warning! Wild animals crossing and no fence.”

“We get motorcycles here all the time,” the property’s co-owner, Michele Stewart, had informed me. She could not have been speaking of tourers, because beyond the gate, the track was not suited to big bikes such as the Roadmaster. The sharp incline had me sweating with mental exertion as I feathered the throttle and clutch to maintain forward momentum while bouncing over gullies and clawing over rocky outcrops and ledges. Surprisingly, the bike’s suspension soaked it all up.

Stewart told me she feels sentimental about the antelope that inhabit the property. She even gives them names. Hence, the reserve’s wildlife does not include lions.

The following day brought a 385-mile ride—and rain. The route passed through Oudtshoorn, known as “the ostrich capital of the world.” Thousands of the birds appeared, looking bedraggled and wet. I, on the other hand, was protected from the elements by the Roadmaster’s full fairing, leg guards, and electronic windshield, which can be raised or lowered with a fingertip switch.

The landscape continually changed as the R62 and R43 unfurled westward. An open-throttle ride led across a desert, then through mountain passes, and then past turquoise lakes. Beyond the town of Villiersdorp, the road snaked dizzily up through the whiskey-brown crags of the Drakenstein Mountains, then corkscrewed down through Fransch­hoek Pass to the Cape Winelands, a destination known for fine dining, boutique hotels, and gleaming white Cape Dutch buildings.

The next morning, as dawn sunlight flooded the valley, I put the Roadmaster in motion and savored the growl of its engine on the trip back to cloud-draped Cape Town to close the loop and conclude the adventure.