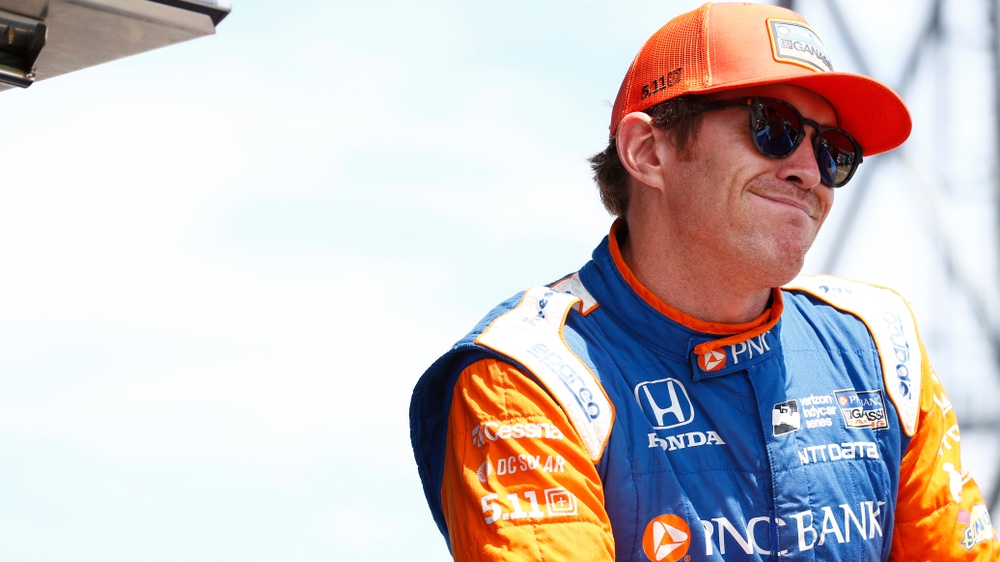 Part of Scott Dixon’s day job is to drive a Ford GT. As a driver for the Chip Ganassi racing team, Dixon dominates the IndyCar series, where he’s won the Indy 500 once and the whole championship a staggering five times, including the 2018 season. The rest of the time, he’s behind the wheel of the 3.5-liter V-6 EcoBoost Ford GT racecar, competing in the GTLM class. In the GT, the New Zealand native’s notched a class win at the 24 Hours of Daytona and a third-place podium finish at the 24 Hours of Le Mans. Usually, people don’t want to take their work home with them, but if your work is driving a winning racecar, then you likely do want a road-legal version in your driveway. After a three-year wait, Dixon’s personal Ford GT has finally arrived and it’s a carbon-drenched beaut.

But just because his big wins helped the Ford GT make headlines everywhere, Dixon wasn’t treated to any special treatment when it came time to buy his. “When I was first approached to drive the racecar for Ford [through Chip Ganassi], I said absolutely, but I want to get locked in for receiving a GT,” Dixon told Robb Report. “Ford told me, ‘sure, no problem,’ and as the months went on, I never heard anything until I got an e-mail where I had to apply for the GT. I don’t know how it works for everyone else, but I had to submit all my information and a video introducing myself and saying why I thought I deserved to buy one.”

Dixon chuckled when asked to recap his video submission. “I said, ‘Hi, I’m Scott Dixon. I’ve won Daytona for Ford before. I think I’d be a great fit for the GT. Please may I have one?’ I don’t know who receives the applications and looks at them; maybe it was Raj [Nair, then president of Ford, who was instrumental in reviving the GT and its return to racing], but I was seeing [all these Ford executives] every weekend while racing.”

After he was approved to buy America’s best supercar, Dixon opted for a Carbon Series model. “I would’ve gone for a Heritage Series, because of the history with Bruce [McLaren, a fellow Kiwi], so then I was eyeing the lightweight version, with the radio and air-condition delete. But during the press launch, we were all in Utah to do some driving, and even though it was cold outside, when I turned off the air-conditioning, it was too hot in the car. When the Carbon Series came along, it had the same specs, but included the air-conditioning and a radio,” Dixon said.

Dixon’s not a splashy or splurgy man, so there’s no bevy of supercars currently in his garage. In fact, the only supercar he bought—an Audi R8—he sold within two weeks of receipt, noting, “I didn’t feel anything from it.” So the Ford GT was a big deal, as was the delivery a few days ago. “I got the e-mail saying it’s coming and I needed to pay the bill and turn up, and I’m looking at the bill, going, ‘Man, that’s a lot of money,’” Dixon said. “But with the history of the GT and the significance of this thing and being a part of it, I didn’t mind.” Dixon was there the moment his half-million-dollar GT was unloaded from the truck.

His first drive in the GT was “pretty crappy! It was snowing the day it arrived, and you’re not supposed to drive on those tires under 45 degrees. The delivery guy said, ‘Normally, I wouldn’t let anyone drive it under these conditions, but I think you’ll be okay.’” Dixon laughed. “I took it from the dealership to my house on totally garbage roads. I don’t think I left third gear or broke 40 miles an hour.” Still, the champion noticed plenty of people snapping pictures while he was driving.

Apart from requesting VIN number 9—his IndyCar number—Dixon said there’s nothing special about the spec or the setup. While he’s never owned a white car, he went for it here because “it’s a little more subtle and I’m not a big flashy person. I think the carbon stripe and wheels contrasting it make it striking.” After driving racecars on various tracks around the country, Dixon doesn’t think this road car will do them justice. “I’ll use it for date nights,” he shared. “I’m funny with cars. I feel like I shouldn’t put miles on them, but I will put miles on this one. Indiana isn’t ideal for driving, so I’ll probably take this to the West Coast or to Montana for a fun drive.”

Dixon and his wife, Emma, have two small daughters, who were besotted by Dad’s new wheels. “We have a Range Rover, an Audi SQ5, and an Acura MDX that I drive daily, and I parked the new GT in the middle of those and the girls came home from school and saw it and were blown away. They asked if I could take them to school in it,” Dixon laughed. “I told them that it only has one seat so someone’s going to have to ride behind us with Mom.”

Dixon’s a lucky man. New orders have closed on the Ford GT, but those who missed the boat could always get another shot, albeit an expensive one, should a new GT make its way under the hammer, such as this one that fetched $1.8 million over the summer.