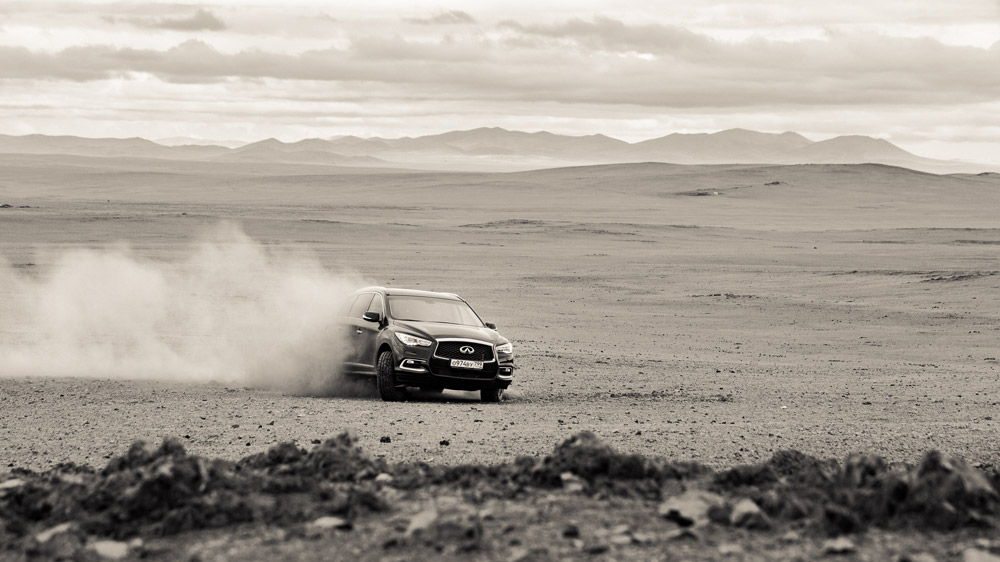 “The terrain was rapidly becoming impassable for our cars because of the drifting sand. . . . The cars could go only a short distance under their own power; then everyone out, and with rope-bound canvas strips laid down in front, strain and push until the car had reached an area of harder sand. . . . We were exhausting our gasoline and men, wrecking the cars.”

The natural world has been conquered. There is no real adventure anymore. Gone are the great explorers of the 20th century like Roy Chapman Andrews, a man who scoured the Gobi Desert looking for dinosaur bones while facing desert storms and deadly bandits. Tell that, however, to the six guys knee-deep in the sand behind our SUV, pushing. They’ve been out in the Mongolian desert for weeks on a similar mission, and, like Andrews, they’ve found fossils more than 70 million years old. Also like Andrews, those dinosaur finds have come at the price of stuck vehicles, injured team members, and constant vigilance against venomous snakes, spiders, and scorpions. In the battle of technology versus the Gobi, the Gobi always wins.

The SUV rocks forward, and I give it a little gas—then I bury the throttle. The vehicle gains traction and leaps forward. Two of the guys run to catch up and then throw themselves into the open rear doors, whooping merrily.

This is something that the team —Explorers Club members from Hong Kong—has learned about traversing the Gobi, even in a modern, all-wheel-drive SUV like our Infiniti QX60: Go slow and you’re dead. Instead, you’ve got to fly over loose sediment at speed, stopping only when you reach a stretch of hard dirt.

So I keep our SUV at a steady 45 mph no matter what, sending it crashing over rocks and bushes and blasting through dry ravines.

But then we round a bluff, and I slam on the brakes. Before us is a vast wasteland of dunes; the road we’d been following obliterated. An epic sandstorm the night before had erased it and any signs of humanity.

We’re trying to head east, out of this desert bowl, to meet up with our support vehicles, six hours away. But this isn’t going to work. Surely we’ll turn around. Then word comes over the radio. We’re going forward.

I take a breath. Our caravan of seven pickup trucks and SUVs has no outside support; nobody knows exactly where we are; and the satellite phones are spotty at best. We may be in some very real trouble out here. Our Gobi adventurer-in-arms, Roy Chapman Andrews, would surely have related. He would have just pushed on, too. Shrugging, I put the Infiniti back into drive, aim at the dunes, and gun it.

I’d never heard of Roy Chapman Andrews before this trip. RCA, as he was known, was both the director of the American Museum of Natural History and a president of the Explorers Club. He was famous in his era, embodying a bold American spirit that took him adventuring around the globe. (He was also the basis for Indiana Jones.)

Much of Andrews’s late 30s and early 40s were spent in Central Asia, hunting for fossilized bones. He theorized that the Gobi was full of them—an unproven idea—if only he could reach the vast swathes of desert. But at that time, travel by camel and cart were the norm.

RCA soon seized on what critics said was an insane idea: Explore the desert by motorcar. In The New Conquest of Central Asia, published in 1932, he wrote: “With motors we could go into the desert as soon as the heavy snows had disappeared, penetrate to the farthest reaches of Mongolia, and return before continued cold and snow set in. . . . We could travel about 100 miles in a day; that is, 10 times as far as a camel caravan.”

And so he sent out teams of camels far ahead of him, carrying supplies and cans of gasoline. Then his team set out in a caravan of Dodges. “For travel in the Gobi, a car must be light, have a high clearance, great durability, a flexible chassis, and not less than a 28 horsepower engine. The Dodge Brothers cars fulfilled these specifications to the letter,” RCA later wrote.

A series of expeditions in the 1920s were a huge success, with RCA’s team discovering bones that still populate museums around the world. They found fossilized eggs, proving that dinosaurs were indeed a type of reptile. They also faced ambushes by bandits, desert storms, venomous snakes, and hungry wolves. Andrews even accidently shot himself in the leg. Who ever said adventuring was easy? Which brings us to this trip nearly a century later, coined the Roy Chapman Andrews Centennial Expedition. It’s an operation dreamed up and assembled by the Explorers Club’s Hong Kong chapter, underwritten by Infiniti, and led by the Institute of Paleontology and Geology of Mongolian Academy of Sciences (IPG).

The team is relying on drones to map the Gobi’s difficult terrain and identify sites most likely to yield new finds. Two American scientists with deep knowledge of mapping were brought in to fly the drones and coordinate with the paleontologists. The results have been dramatic. The mapping and satellite data has led to vast new caches of bones, some of types that the paleontologists have never seen. Precious hours are saved as the paleontologists and Explorers Club members can go directly to the most promising locations.

It’s all going extremely well until the sandstorm hits.

“A moment later the storm had swallowed up the tents, tearing madly at the blue cloth. Clinging to the poles, we tried to keep our frail shelters upright. Blasts of gravel, like exploding shrapnel, brought bright blood to our faces. We could breathe only air thick with sand. . . .Thus began a night which I shall long remember. . . . For sheer discomfort it was one of the worst I have ever spent.”

RCA’s account of a sudden sandstorm is a faithful recounting of our own experience. As the team tries to dismantle a large canvas tent in the wind, a heavy pole comes down and concusses one member of the Explorers Club. As the cook’s tent collapses, a scorpion—one of many lurking underneath the flattened shelter—stings another member. Both men have to be evacuated to a medical facility even as the sun drops, the wind tears apart the campsite, and all sightlines have vanished.

A sandstorm leads to evacuations.  Photo by Ben Draper.

I had read RCA’s account of his dust storm before my trip, which is why, even as the wind slaps my face, the storm seems oddly familiar. This déjà vu derived from his writing has been a revelation throughout my days in the Gobi. Remarkably, even a century on, the landscape is almost exactly as RCA described it.

Andrews wrote about the sweeping blue grandeur of the Mongolian sky and the pure sunlight. The endless expanse of prairie. The warning flag of camel bones on the side of the trail. The hospitality of the Mongolian people and the comfort of their nomadic homes, the ger. The lack of roads and maps and the ability of the Mongolians to navigate through it anyhow. He was enamored by all of it.

Each one of those details remains true today. There are no fences, no telephone lines, no asphalt roads. No road signs. The land stretches out to, well, infinity. And the people are fantastic.

Andrews was fascinated by the speedy desert antelopes. He tried to catch them in his Dodge, driving 45 mph or more on the flat desert only to have one cross his path, going even faster. “[The antelope] was certainly doing 60 miles an hour. Can you imagine an animal not equipped with wings and having no gas tank, reaching such a speed?” he wrote.

To witness the same species of antelope on the Gobi plains going flat out past our Infiniti is yet another fitting detail in our grand reenactment. Much of the world has changed, but the Gobi simply doesn’t.

Our caravan through the dunes is accompanied by a lifted pickup truck with huge tires and a winch, brought along to help recover any stuck vehicles. We continue on our route, and soon even that truck is sunk up to its axles in sand. Two lesser pickups have suffered a similar fate. Though it’s not designed for hard-core off-roading, my Infiniti QX60 remains resilient and unstuck. The Mongolians stand around and mutter. This isn’t good.

Our leader, the director of the IPG, relents and gives the order: It’s time to turn around, out of the dunes, to find another way. We begin to dig the trucks out. We move them, one at a time, to firmer ground. It will take hours in the heat. Eventually we find another road, leading us to semi-civilization before night falls. The spirit of the combined team, however, remains upbeat. It is an adventure, after all.

Andrews would have related. One imagines he would have been thrilled to use the new drone technology, just as he used motorcars to aid his adventuring back in the day. The expedition has shown there are many years of digging and exploration to come. One wonders if even Andrews could have conceived of the vast numbers of dinosaur bones out here. Perhaps he did. At the end of an RCA report titled The Unfinished Task, he wrote, “We are more than ever convinced that Central Asia was the paleontological Garden of Eden. Future work will demonstrate whether we are right or wrong.”

Charles Lindbergh, the first person to cross the Atlantic on a solo flight, was a member. So were Neil Armstrong and Buzz Aldrin. Like Roy Chapman Andrews, all belonged to the illustrious Explorers Club.

Founded in 1904 in New York City, the club today continues its stated goal to advance field research and preserve the instinct to explore. Almost every time there’s been a famous first in the last century, a club member has been there. There are chapters around the world.

But all institutions must continue to evolve. And the Hong Kong chapter, which formed in 2014 and conceived of the Gobi expedition, is intent on working inclusively with local cultures. According to the chapter’s founder and chairman, Michael Barth, the group chooses “collaboration over conquest.” Says Barth: “We wanted to create a more inclusive, innovative, and impactful approach to exploration—long-term developmental projects rather than one-off adventures.” To that end, the club not only secured funding from Infiniti to bring along the drone/imaging scientists from the United States; it’s teaching members of the Mongolian Institute of Paleontology and Geology how to use the mapping technology for themselves.