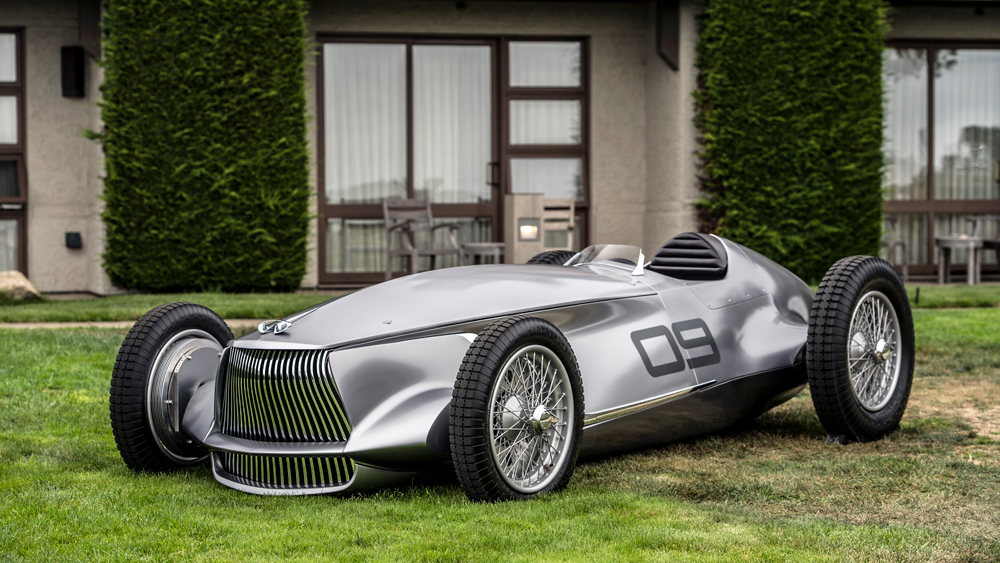 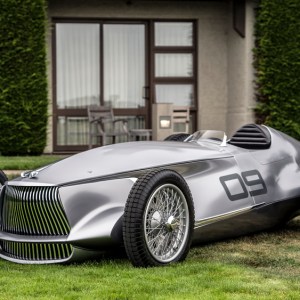 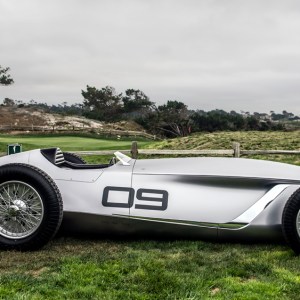 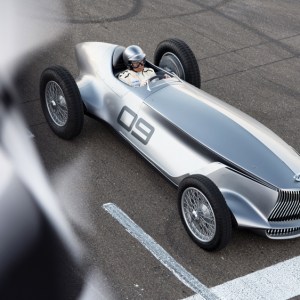 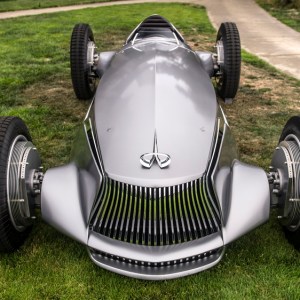 Imagine discovering a Japanese race car from the 1940s in a barn, hidden away deep in the south of Japan. That’s the inspiration for Infiniti’s Prototype 9 concept, a retro racer shown at this year’s Monterey Car Week that was a labor of love for both designers and engineers at Nissan’s luxury brand.

Of course, such a car never existed. Infiniti didn’t launch until 1989, but a passion for racing goes back many years. “The first grand prix in Japan was many decades ago,” says Alfonso Albaisa, senior vice president of global design for Infiniti. “So we imagine this Japanese engineer goes to a racetrack and hears the [Mercedes] W154 Silver Arrow blasting at Tamagawa—Japan’s first race track.” That engineer is then inspired to build Japan’s own Formula-One-style car.

Albaisa sketched a sleek, aerodynamic racer made of bare sheet metal. Although the concept hearkened back to some of the great European race cars of the era, Albaisa and his team gave the car elements that are distinctly Japanese.

“It has Japanese DNA, a peaceful harmony, but also ambition to be the best of the best,” Albaisa says.

In a world where designers and engineers are often at war, the Prototype 9 concept is also an example of unity and teamwork. “It was just going to be a drawing,” says Albaisa. “It was never going to be real.” But Albaisa and his design team decided to make a clay model and then a foam prototype. Soon, word spread through the company about Albaisa’s idea, and others stepped forward to turn the concept into reality.

“Somehow, advanced engineering found out, and they said, ‘We will also join this in our spare time,’” Albaisa explains. “They had heard the story and that it was a celebration of engineers and manufacturing of the industrial age of Japan, which of course their ancestors were the leaders of.” Everyone who worked on the car did it solely out of passion for the project.

The single-seat race car features a steel ladder frame, with steel body panels that were hammered out by hand. Despite its retro appearance, the Infiniti Prototype 9 concept houses a thoroughly contemporary power train: An electric motor and lithium-ion battery can send the 1,962-pound racer from 0 to 60 mph in 5.5 seconds.

“It’s one thing to be a show car that just gets molded—[but] this is a real car,” says Albaisa, beaming, “and when the manufacturers get involved, it becomes a technical exercise and a design exercise.”

Although Infiniti is a relatively young brand, it has earlier roots in racing. Also shown during Monterey Car week was the only surviving Prince R380, a custom-built Japanese race car that broke several land-speed records in 1965 and won the 1966 Japanese Grand Prix at Fuji Speedway. Infiniti traces its legacy to those cars, originally created by Prince Motor Company.

Albaisa is proud of the hundreds of people who worked to make the Prototype 9 concept a reality. “How they can take time out of their crazy day to bang out a car like that is a testimony that I made the right decision 30 years ago to join the company.”