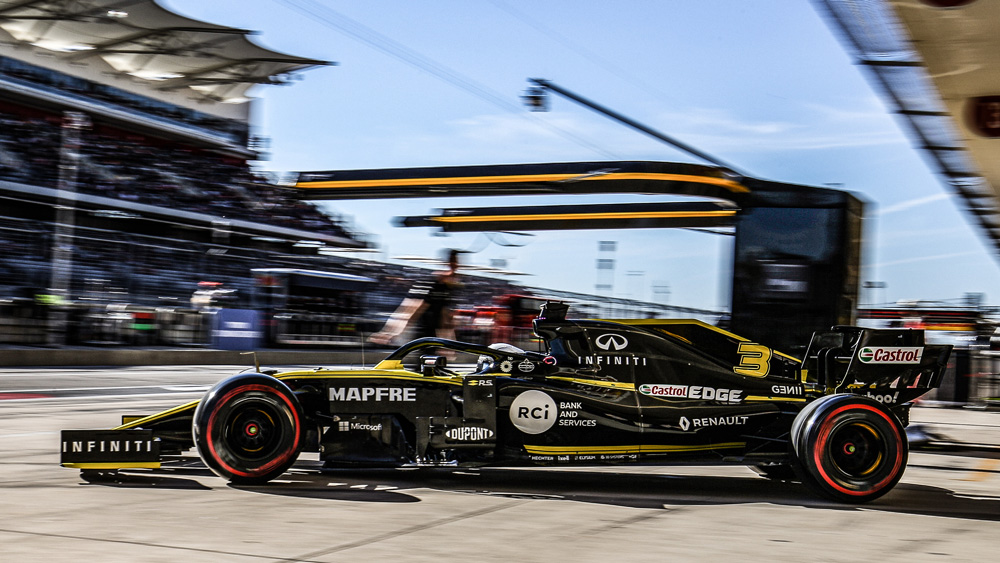 When it comes to any automotive manufacturer’s involvement in racing, conventional wisdom dictates the old adage of, “Win on Sunday, sell on Monday.” While there remains a scintilla of truth to that, minimum practical benefit is a tough sell when Formula 1 partnerships typically are loss leaders.

Still, often-profitless F1 sponsorships carry some worth in the long run with marketing reach. If the ante is upped to a technical partnership, such as Infiniti’s relationship with the Renault F1 Team, the long-term benefits shine a bit brighter.

But what makes Infiniti‘s involvement in Formula 1 unique and even more potentially profitable over the long term is the marque’s acclaimed Engineering Academy. Each year, the program searches for the sharpest technical students all over the world to compete for a chance to win a one-year paid placement with both Infiniti and the Renault F1 Team.

The Renault F1 team racing in the United States Grand Prix at Circuit of the Americas.  Photo: Courtesy of Infiniti.

Once placed, the students can spend their first six months working for Infiniti and their next half-year working with the Renault F1 Team, or vice-versa. Sabre Cook, the 2018 Infiniti Engineering Academy USA winner, estimates that being in the program has advanced her career up to three years ahead of what it would have been.

“[The Infiniti Engineering Academy] gave me a way into F1 directly,” she tells me during the United States Grand Prix in Austin, Tex. “I think to get to that point versus just off trying to use my contacts that I had previously, I could have maybe gotten an internship, but I wouldn’t have been looked at on the same level. And, obviously, I got the experience of working at Infiniti, too.” Cook adds that, “Having a car manufacturer on your resume is huge, so to be able to go do that really gave me an advantage over where I would have been without it.”

Sabre Cook was the 2018 winner of a one-year placement in the Infiniti Engineering Academy.  Photo: Courtesy of Infiniti.

Since the Infiniti Engineering Academy launched in 2014, about half of the program’s students have landed jobs either in F1 or at Infiniti. Other participants have gone on to careers at Audi, Dyson, Ford, SpaceX, as well as competing F1 teams and various universities.

While outside companies were always bound to reap some of the benefits of Infiniti’s talent search, the unique approach of personnel cross-pollination between Infiniti and the Renault F1 team has proven mutually beneficial. Prior to 2016, Infiniti was the title sponsor of the Red Bull Racing F1 team, and while that was great for marketing exposure, there was still room for improvement.

“We were the sponsor that reached the highest visibility in the sport for four years, but it was just visibility,” says Tommaso Volpe, Infiniti’s director of global motorsport. “Now with Renault, we enjoy both; we have the visibility, but we’re also increasing the credibility of the brand because we are an active player,” says Volpe on the advantage of Infiniti’s place as the luxury component within the Renault-Nissan-Mitsubishi Alliance.

“The moment we started the technical partnership with Renault, there were no barriers in what we could share,” he states. “In the core business, we already have more than €5 billion in synergies.”

When it comes to passenger vehicles, the benefit of the Infiniti-F1 relationship is manifested through the Q60 Project Black S prototype. The menacing 568 hp sports coupe boasts revolutionary dual-hybrid F1 tech that not only recovers energy during braking, like conventional hybrid systems, but also recovers energy from the twin turbochargers during acceleration.

Formula 1 is credited for prime-timing technologies we take for granted today, like ABS and traction control, but seeing F1 know-how hasten the Q60 Project Black S from idea to reality (and maybe production) is promising for enthusiasts who can’t wait for concept vehicles to evolve into actual garage candy. And Infiniti plans to further integrate F1 engineering processes into its production-vehicle operations.

With the Infiniti Engineering Academy, the Infiniti and Renault F1 technical partnership and the Project Black S, it appears that racing is grabbing yet another gear in the pursuit of enhancing motorsports’ influence on the cars that we enjoy every day.

Who knows? Perhaps in five years, what the Renault F1 team learns on race day could possibly be integrated into a performance-enhancing software update beamed into your Infiniti within hours. “Win on Sunday, more horsepower on Monday.”