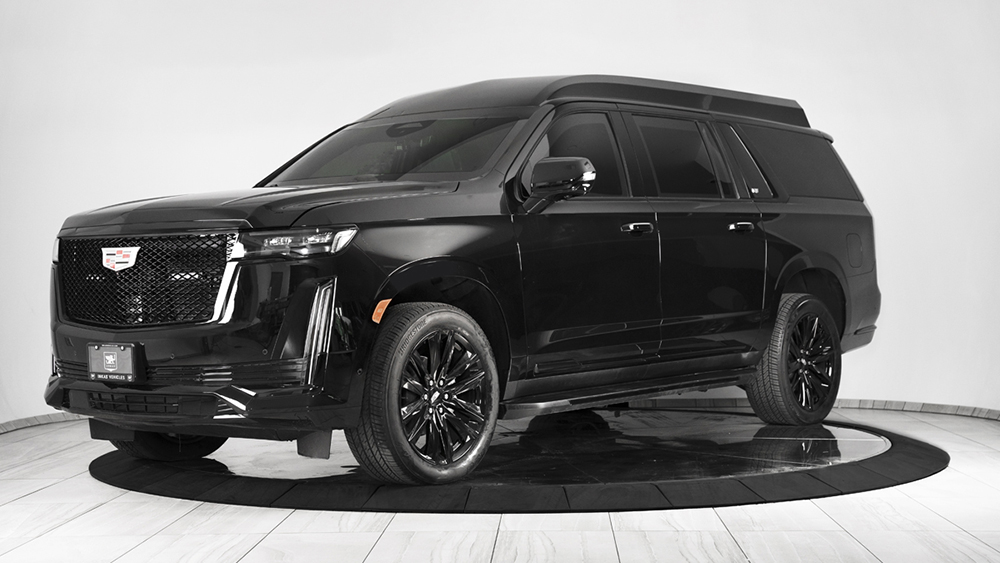 There’s no mistaking who Inkas’s latest armored Cadillac is for.

The Canadian security firm has just unveiled a new “Chairman” edition of the latest generation Escalade. Designed to meet the high standards of—you guessed it—chairmen, it is equipped with the company’s most lavish and tailored vehicle package to date. That means it’s even more tricked out than the armored 2021 Escalade Inkas released back in June.

The VIP cabin promises premium finishes and exquisite upholstery with custom stitching. The ceiling has been raised 5 inches and fitted with a high-tech lighting system that is said to revitalize energy on the go. (Any entrepreneur will love that.) The captain seats also have temperature control and built-in massage systems for a little extra comfort.

In addition, the cabin sports an automated driver partition with a hide-away TV, a refined 19-speaker sound system, a range of displays and a few nifty fold-away tables. The reimagined vehicle control system, meanwhile, allows you to control everything with the touch of a button.

The automated driver partition with a hide-away TV.  Inkas

“The Inkas team is honored to add high-security armoring to the latest generation Escalade and elevate the already lavish interior with advanced features and customized details tailored to the preferences of each client,” Inkas cofounder and chairwoman Margarita Simkin said in a statement.

The car is tough as nails, too. It is fully covered in discreet, lightweight armor that reportedly offers “full-perimeter protection.” The suspension and structural components have also been reinforced, but the car maintains the remarkably smooth ride of the original, according to Inkas.

One of the personal displays.  Inkas

The near-impenetrable SUV offers a ballistic protection level of CEN 1063 BR6—the second highest offered by the company—which means it can take fire from a high-powered assault rifle and withstand the explosion of up to two hand grenades. Optional security features include night vision, strobe lights, lockable storage for valuables and heavy-duty wheels, as well as a 360-degree camera system, a satellite TV, a door assist system, a fire suppression system and a siren/PA system.

The Chairman edition is now available worldwide, with pricing available upon request. It’s a safe bet that it’ll run six figures, though, as the regular Escalade starts at $77,000. Hey, that’s chump change for a chairman.

Click here to see all the photos of the Inkas Armored Cadillac Escalade Chairman.