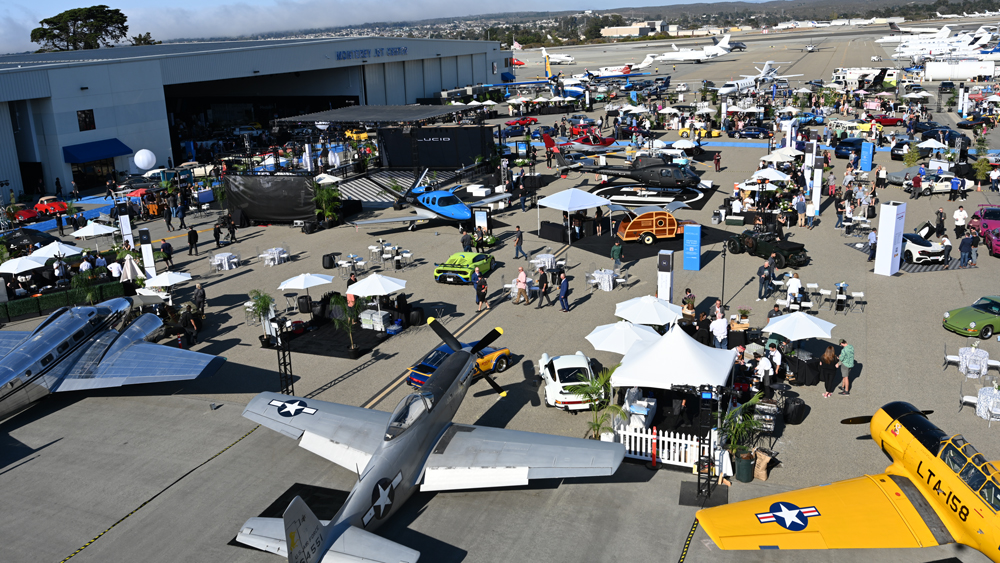 Spring may generally be regarded as the season of beginnings, but late summer is when the automotive world blooms by way of Northern California’s Monterey Car Week. Fittingly, what is considered by many to be the first sign of life for each year’s edition of the planet’s largest collective car show has itself been reborn.

On August 17, the Monterey Jet Center once again played host to the aviation and automobile fete that has been known as the McCall’s Motorworks Revival for the last three decades. For 2022, however, the expo debuted as Motorlux with its new owner Hagerty at the helm. Judging by the size of both the exhibition and crowd, the transition seems to have rolled along as smooth as a Mercedes-Maybach on butter.

Approximately 3,000 guests filled the event space over the course of about six hours, gazing at more than 150 exotic automobiles, 10 airplanes and 3 helicopters, while grazing on cuisine from numerous top chefs in the area. Complementing the culinary spread were an array of spirits, as well as wine from 10 surrounding vintners. It all carries on the tradition that began with the original event’s founders, Gordon and Molly McCall, who have remained on as consultants. And it’s no coincidence that the vibe is very similar to that of the Quail, a Motorsport Gathering that follows two days later, since Gordon was instrumental in developing that hospitality-focused concours and expo as the motorsport director for the Quail Lodge and Golf Club in neighboring Carmel, Calif.

Approximately 3,000 guests filled the event space over the course of about six hours.  Hagerty

“One of the great things is that car people gather—they gather at events like Motorlux to meet, connect and reconnect,” stated McKeel Hagerty, CEO of the self-proclaimed “automotive enthusiast brand” which focuses on insurance for the collector-car market. “My thanks to Molly and Gordon McCall. The event that they founded in 1991 is stronger now than ever and continues to serve as the true kick-off to Monterey car week.”

One of the most dominating displays was Phillip Sarofim’s 1951 Grumman HU-16 B, a stunning reminder of the Golden Age of aviation. A fortunate few were allowed to tour the interior, which presents an aesthetic more akin to that of a superyacht in fit and finish. The periphery of the aircraft was accented by several Myers Manx dune buggies, both original examples and the new one Sarofim developed with designer Freeman Thomas after taking ownership of the name. Also elevating the experience were a 2022 Cirrus SF50 Vision Jet and examples of Bell’s 407 and 505 helicopters, among other top-tier flying machines.

Phillip Sarofim (right) on board his 1951 Grumman HU-16 B.  Hagop Kalaidjian

On the four-wheel front, a balanced mix of supercars and classics comprised a field that included the cutting-edge Hennessey Venom F5 coupe and Koenigsegg Regera, along with hallmarks of bygone luxury and performance. Many of the latter were shown as a preview before Hagerty offered them up on Thursday through its own Broad Arrow Auctions event. Included among the 90 lots were a 1956 Mercedes-Benz 300 SL “Gullwing” coupe, a long-base 1971 Mercedes-Benz 600 Pullman Six-Door Landaulet and a 1990’s-era Ferrari F50. Yet most eyes were understandably drawn to the late actor Sean Connery’s own 1964 Aston Martin DB5, estimated to fetch as much as $1.8 million.

By nightfall, the ambiance had transformed into what one would expect from the early days of Studio 54—a myriad people on the dance floor while the DJ dropped beats that were occasionally backed by pyrotechnics. Sure, the Motorlux branding may be new, but what remains the same is the caliber of machines and the air of anticipation that this celebration fuels for the next few days to come.

Click here to see images from the 2022 Motorlux exhibition.