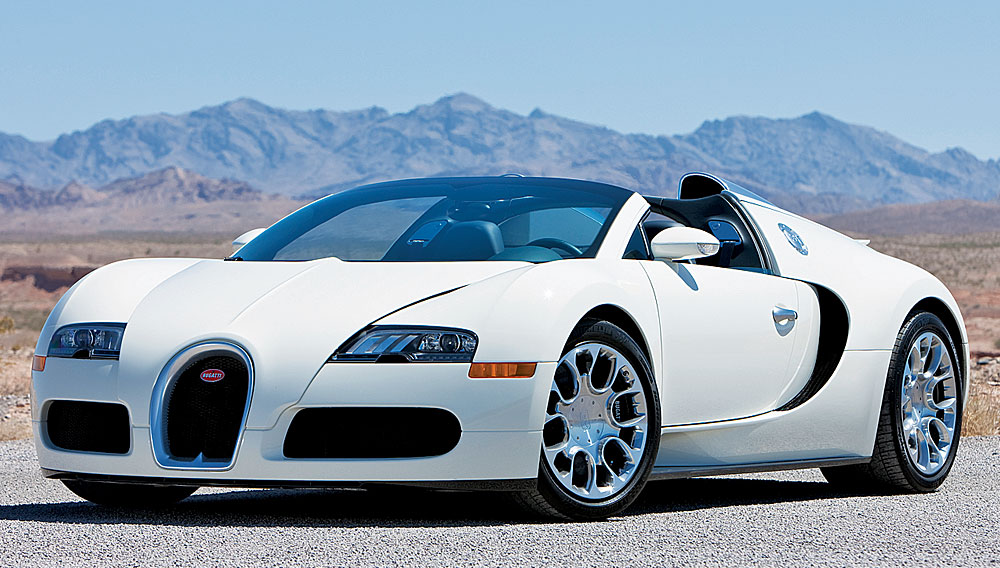 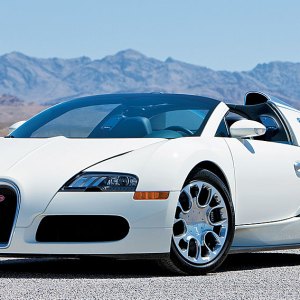 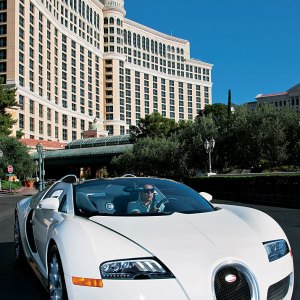 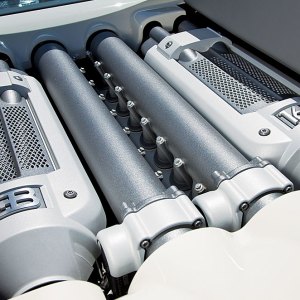 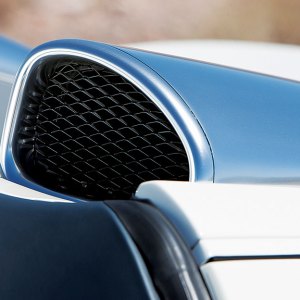 Driving on Las Vegas Boulevard in the 2010 Bugatti Veyron 16.4 Grand Sport—the roadster version of the French automaker’s record-breaking supercar—I find it impossible to ignore the camera flashes, pointing fingers, and unsolicited remarks. As Butch Leitzinger (Bugatti’s official test pilot for North America) and I enter this final stretch of Robb Report’s Los Angeles–to–Las Vegas test-drive of the new automobile, passengers in nearby cars hang out of their windows to get a closer look. They know this car is something spectacular, even if few of them can identify its make or model. The attention grows when we park in front of the Encore hotel, where guests and gamblers crowd around the egg-shaped convertible.

Legendary Las Vegas hotelier Steve Wynn takes the Encore security staff by surprise as he wends his way toward the car to investigate. He leans over to get a closer look, and I introduce myself. As Wynn shakes my hand, he gets in close and asks a question: “Tell me, what makes this car worth $2 million?”

Taken aback, I repeat the question. “That’s not really convincing,” jokes Wynn. “It reminds me of a story. There is a boy selling pencils on the street corner for $10,000. Nobody is buying them, so finally a man stops and asks why the price is so high. The boy smiles, looks up, and says, ‘I only have to sell one.’ ”

Bugatti certainly isn’t selling pencils; the company is selling the most impressive expression of automotive engineering on the road today—quite possibly ever. The vehicle perfectly embodies advanced motorcar design and technology: Four turbochargers sit atop a 16-cylinder engine to produce 1,001 hp and 922 ft lbs of torque. The Veyron Grand Sport reaches 60 mph in a hair-raising 2.5 seconds and is capable of attaining speeds greater than 250 mph—well, 224 mph without the glass-paned detachable roof. This means that the car costs nearly $10,000 for every mile per hour it achieves with the top off.

Roughly 12 hours before our encounter with Steve Wynn, Leitzinger and I prepare one of only two Grand Sport models in the United States for our journey from L.A. to Vegas. There is so much more to this car’s appeal than its performance stats—you have to drive it to appreciate the experience fully. On this day, Bugatti provides a chase vehicle, a Volkswagen Routan, to carry the roadster’s polycarbonate top. “The roof weighs 36.3 pounds, and, as you can see, there is nowhere else for it to go,” says Leitzinger as I assist him in removing it. “I think it’s safe to say that owners will probably just leave it off.” He also points out the car’s canvas covering, which, when not in use, takes up roughly 90 percent of the front stowage compartment. Called an “umbrella” by some at Bugatti, this provisional roof is intended for use only when the weather turns bad. It will keep out the rain, but it also creates drag, lowering the Bugatti’s top speed to a meager 99 mph—lower than that of the Volkswagen Routan that is to follow.

Thankfully, on the day of our drive, the weather cooperates and the skies honor Bugatti’s racing heritage with a reverent shade of blue. But before we set foot inside the cabin, Leitzinger takes a few moments to point out several of the Grand Sport’s features. New LED daytime running lights, a slightly taller windshield, and the detachable top are the only visual differences from the fixed-roof Veyron. Most of the work, he says, was done below the surface. The Veyron’s original monocoque structure was reinforced around the side skirts and transmission tunnel, and the doors, formerly aluminum, are now constructed entirely of carbon fiber. For the unlikely event of a rollover, the redesigned air intakes—situated just above the seats—now feature 4-inch-thick carbon-fiber reinforcements.

The absence of the roof makes it exceptionally easy to step inside the cabin, which, as Leitzinger points out, features a number of improvements of its own. The seats are made of moisture-resistant leather and boast a faded blue hue Bugatti calls “Azzurro.” A reverse camera—which integrates a 2.7-inch display screen into the rearview mirror—and a French-sourced Puccini sound system are both new for the Grand Sport. “I hope you brought your iPod,” Leitzinger says. “You can plug it right into the center console, and we can be on our way.”

The car’s engine fires up with an emphatic roar, as if to say that it is ready for anything. On the freeway at 65 mph, the Grand Sport drives a lot like a Bentley. The steering is heavy and direct, the suspension is tight but not jarring, and the shifts are quick and imperceptible, thanks to the ultrasmooth 7-speed dual-clutch transmission. Although the Veyron behaves like a run-of-the-mill luxury car at legal road speeds, the awed expressions on other drivers’ faces serve as reminders of the car’s true nature.

After we leave the congested L.A. freeway system, the road to Las Vegas becomes our own personal stretch of tarmac. Intermittent breaks in traffic allow for a few short blasts from 60 mph to 120 mph, and I begin to understand that the Grand Sport is much more than a car—it is an experience. Pulling the left paddle-shifter back into third gear and smashing the throttle provides a soundtrack to the speed. The twin intakes directly behind our heads swallow air with a magnificent whoosh, and all sixteen cylinders crescendo to an awe-inspiring 6,500 rpm. There is no better sound in the world. At 100 mph, the windows automatically roll up for improved airflow, intensifying the mechanical song.

Eventually the freeway clears, and I take the opportunity to see what the car can really do. The pull of the engine is unrelenting, and the speedometer spins so quickly that it appears to be counting by tens: 100, 110, 120, 130, 140. At this point, I feel the Grand Sport drop an inch closer to the ground, and I witness via my rearview mirror the rear wing extend an entire foot into the air. The speedometer now reads 160 mph. Leitzinger waves his hand above the shift lever, signaling me to slow down.

“I think you get the idea,” he says. “Did you notice the car go into handling mode? That happens at around 137 miles per hour. Top-speed mode sets in at about 223 miles per hour and is the only thing you haven’t done. But it requires a separate key, and this is not really the right environment to be testing something like that.” He’s right. I would need a 5-mile straight to reach 253 mph and have enough time to employ the Grand Sport’s 15.7-inch carbon-ceramic front brake discs for a complete stop. At that speed, the 8-liter W-16 engine consumes 1.8 gallons per minute; the car would run out of fuel in roughly 12 minutes.

Although I do not deplete the 23-gallon tank during my brief exhibitions of speed, Leitzinger feels that it would be prudent to stop for fuel anyway. Unfortunately, it proves nearly impossible to locate a station with the 98-octane racing fuel that the vehicle requires, and we are forced to fill up on a lesser blend. “The car is engineered to take fuel as low as 91-octane for emergencies such as this,” Leitzinger says. “The ECU [engine control unit] recalibrates to compensate for the lower-quality fuel, but the output drops to a lower horsepower.” He also informs me that running the Grand Sport on 91-octane disables its launch-control feature, a component that allows for optimum acceleration.

Given the rarity of racing fuel, this news is a bit disheartening. But, according to Dr. Franz-Josef Paefgen, president of Bugatti Automobiles SAS, these precautionary systems should have very little impact on the full experience of driving the Grand Sport. “Yes, we know the car has a lot of horsepower and that it is very fast,” Paefgen says. “But you don’t truly know what the car is capable of until you take it through a few turns; that’s when you realize that the Bugatti is something special.”

A car like the Veyron Grand Sport is not something you manhandle around corners. Its mid-engine, all-wheel-drive layout allows it to hold a turn with unprecedented precision. So a detour to the curvy roads around Lake Mead—just 30 minutes from the Las Vegas strip—is exactly what Dr. Paefgen ordered. In this location, I am finally able to get behind the wheel without Leitzinger in the passenger seat. I can feel the lateral g-forces pulling on me through every curve and bend in the road, but the car continues on unabated with every press of the throttle. In fact, it is not the automobile that eventually grows weary, but rather the driver—the temperature in the Nevada desert has climbed to a withering 110 degrees. Even with the air conditioner set at its highest setting, I am sweating bullets, so I put the car’s top back on.

A few hours later, after leaving Encore, I notice that the Grand Sport feels a lot like the fixed-roof version with a skylight. I then think a little more about Wynn’s comments and try to wrap my head around the $300,000 difference between the roadster and the standard Veyron. After all, for that amount a buyer could purchase the standard model and a Ferrari California, or a Lamborghini LP560-4 Spyder, or even an Aston Martin DBS Volante.

Of course, there is a certain exclusivity that goes along with owning a Grand Sport, even among Bugatti owners. The automaker plans to build only 150 Grand Sport models, as compared to the initial run of 300 fixed-roof Veyrons. To date, more than 30 orders have been placed, but the company acknowledges that many of the early Grand Sport buyers already own a Veyron, which could mean that Bugatti had reached its entire customer base with the original car. “It is a problem, we know,” Paefgen says. “But does a convertible get any better than this?”

He makes a very good point. After a full day with the Bugatti Veyron 16.4 Grand Sport, I can honestly say no, it does not. And in that assessment, Steve Wynn may find the answer to his $2 million question.