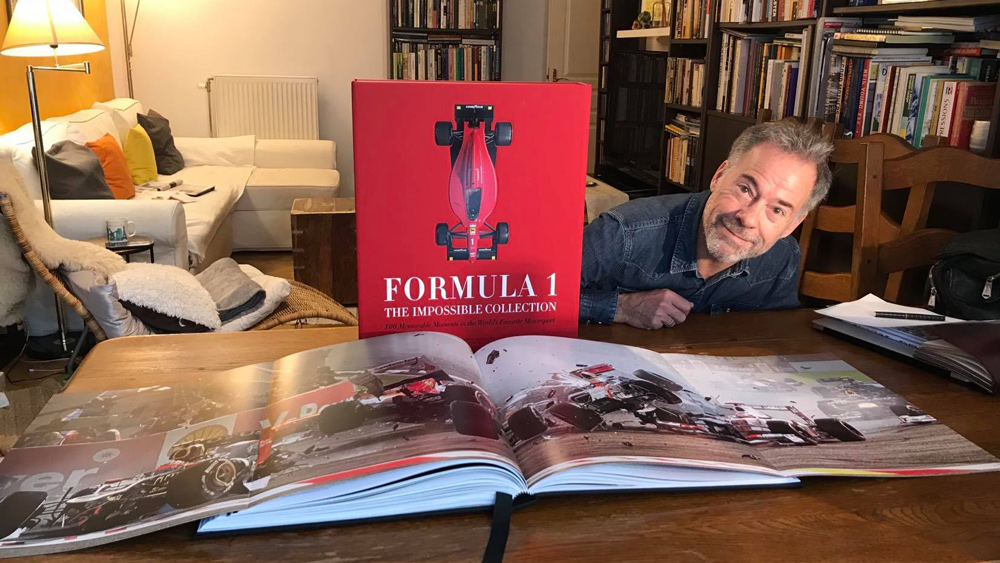 Few people are fortunate enough to hold in their hands a manifestation of their life’s work, but Brad Spurgeon, now, is one of them. And for that, motorsport fans the world over should be thankful. Before becoming a documentary filmmaker, musician and blogger, Spurgeon spent more than two decades covering Formula 1 for the International Herald Tribune and The New York Times, attending every race of every season during his tenure. That made him the logical choice to author the new coffee-table compendium, Formula 1: The Impossible Collection, from publishing house Assouline.

Released on May 20, the $995 tome features 228 pages, with 175 illustrations, that catalog the 100 most important moments in the history of the world’s most famous race series, and includes the drivers, teams, mishaps and milestones that continue to impact the sport. And while neither the Fédération Internationale de l’Automobile (FIA) or the Formula 1 organization itself had any part in the book’s development or content selection, the presidents of both—Jean Todt and Stefano Domenicali, respectively—wrote the forwards in appreciation.

On the same day that Spurgeon received his personal copy of the publication, he spoke with Robb Report about his experience with the racing series, and what it took to get this monumental project across the finish line.

The book “Formula 1: The Impossible Collection” was released May 20.  Photo: Courtesy of Assouline.

How did your love of Formula 1 develop?

My dad took me to the Canadian Grand Prix in 1967, and one of my classmates’ father was in the race. My classmate used to take me to his dad’s house, we’d peek into the garage and see his Lola, so I had this immediate influence from the neighborhood, and my dad loved cars as well. When my dad was hanging out in Europe working as a tutor, in 1950 or so, he met Stirling Moss and they actually had a fight over a girl. Stirling Moss won.

How did you become a journalist covering Formula 1 for more than 20 years?

I never wanted to be a journalist, originally. My dad was a journalist covering the US space program. I joined the circus as a cyclist and juggler to get as far away as I could from my father’s life. After three years, I had a revelation that I wanted to be a writer and went to university and came to France to study at the Sorbonne. In France, I knocked on the door of the International Herald Tribune and asked if they needed someone to work in the archives. I figured that would be the best way to get a foot in the door, and ended up working my way up and writing about many different topics.

Author Brad Spurgeon and his new book “Formula 1: The Impossible Collection” from Assouline.  Photo by Ornella Bonventre, courtesy of Assouline.

I was an absolute [Formula 1] fan, and often fans know more than those who are supposed to cover the race. At the Herald Tribune, there was a great journalist who had been sent to Monaco, but he called me because he didn’t know anything about racing, and I answered all his questions. I figured that I was a writer, I loved the sport, and he didn’t. So, in 1993 I wrote a story on my own about the season and the battle between Prost and Senna, and they used it the next day. From that point, writing race reports came naturally and I never questioned myself, but I had to battle for a few years to make it a regular part of the newspaper.

It’s a look, through words and photos, of the 100 most startling, important and impossible moments in the history of Formula 1 from 1950 through 2020, 71 seasons.

What was the Genesis of this project?

The book was Assouline’s idea. As I understand it, Martine Assouline knows Jean Todt and asked him who he thought could do this book, and he came up with my name. When I looked at what the idea was behind the book, I couldn’t think of a thing I would rather be writing about, such an opportunity to sum up all that I have seen and know of Formula 1.

What was your initial criteria for what made the cut?

They obviously had to be standout in one way or another. If it was an accident, for instance, it had to be included only because of how it had larger repercussions in some way. I wanted to get across as many aspects as I could, including car design, team development, driver achievement, the racetracks themselves, technology and social developments, and that was really difficult.

Where did you begin?

When I started to analyze it, I figured that in 71 seasons there have been 33 world champions. If I focus on each driver that won it, that’s 33 moments, and then select one moment per season, we’re already at more than 100. I came up with an initial list of 150 and then had to keep narrowing it down. I was also able to combine certain events. For example, towards the latter stages of the book, I had the 1989 crash between Prost and Senna at Suzuka, which decided the world championship in favor of Prost. Later on, I had the 1990 crash between the two. For me, both were great and crucial moments but I ended up keeping only 1989 and mention in the copy that a year later they did the same thing.

At the 1958 Moroccan Grand Prix, Stirling Moss took the checkered flag for the Vanwall team, allowing it to become the first constructor’s champion.  Photo by Peter Harholdt, courtesy of Assouline.

How long did your entire process of selecting, then writing, ultimately take?

It took several months. As I said in the book’s introduction, there are moments in every single race. Where and how do you define the most important ones? Once I got that list done, writing each up was an encyclopedia project. And then there are like 15 different facts that have to be checked in each of those 100-word captions, so thousands of facts. And for a book of this quality and price, there was no way I wanted to get anything wrong.

Did anyone at FIA or Formula 1 provide feedback or suggestions?

No, absolutely not. Even Assouline left me completely free.

Racer Lewis Hamilton takes a pit stop during the second race of his rookie season in 2007.  Photo by Darren Heath, courtesy of Assouline.

The images are stunning. How were they obtained?

Once I had created the list, then it was [Formula 1 photographer] Bernard Asset who worked for months on finding the photos to match. His job was one of the most difficult of all, as while there is a mass of photos that exist out there of Formula 1, finding the right one can often be a huge challenge. Once he put together the selection of images for each moment, it was Martine Assouline herself who chose the best photos for the book.

Racer Heikki Kovalainen piloting his Renault R27 with an onboard camera in 2007.  Photo by Bernard Asset, courtesy of Assouline.

What is one of your most memorable moments, personally, covering the sport?

It was the 1998 Belgian Grand Prix and I was in the media center above the track which, at that time, had a view on the back straight. It was the start of the race and I had an interview with [then-F1 director] Charlie Whiting. It was pouring rain and I had to get inside the door to his office. He was finishing a chat with [racer] David Coulthard, and I was within hearing distance of Coulthard saying to him: “Look, I just want you to know, Charlie, that if you don’t start behind the safety car, there are going to be a lot of people going off the track, and I’ll probably be one of them.”

They didn’t start under the safety car, it was pouring down rain, Coulthard slides off and a chain reaction begins of 13 cars smashing into each other at the first corner—$13 million [worth of cars] going up in smoke, but nobody was hurt, fortunately. [The 1998 Belgian Grand Prix] was a freaky, extraordinary thing, full of incidents, and I had a real short deadline. While writing the race report, the stress was just astounding. I got back to my hotel room and, looking in the bathroom mirror, noticed for the first time in my life that I had lost some hair.

How did the pandemic impact your work on this project?

With Formula 1 operating without spectators in this strange period, and not starting until July last year, there is this sense of Before and After. I was working on this when [Formula 1] was suspended in time, in a way. So this afforded a great opportunity to look back at 70 years of the sport. Of course, I included some of the 2020 season. And this was great because, finally, Lewis Hamilton equaled Schumacher’s titles and beat his race numbers, so that was a real watershed accomplishment. The pandemic helped me work on the book, and I was happy to have this book to help me survive the pandemic.

Maria Grazia Lombardi finished sixth in the 1975 Spanish Grand Prix, the only woman to score a point in Formula 1.  Photo by Kenneth Stevens/Fairfax Media/Getty Images, courtesy of Assouline.

Does Formula 1 need to do more to attract a younger audience?

I don’t know. I know that Formula 1 has been talking about going after younger spectators for years, and they’re doing stuff now with eSports. Maybe, from a business perspective, this is a whole market that they want to take advantage of. My own personal thinking has always been that I don’t care who is a Formula 1 fan, although I can understand the point of view that you don’t want it to only be 95-year-olds. But when I go to races, I see lots of kids. I took my own son to the French Grand Prix when he was nine years old, the same age I was at my first race, and managed to get him into the paddock. I had never seen him so happy in his whole life.

In 1982, the United States became the only country to hold three races in a season until last year.  Photo by Bernard Asset, courtesy of Assouline.

What does Formula E’s growth mean for Formula 1?