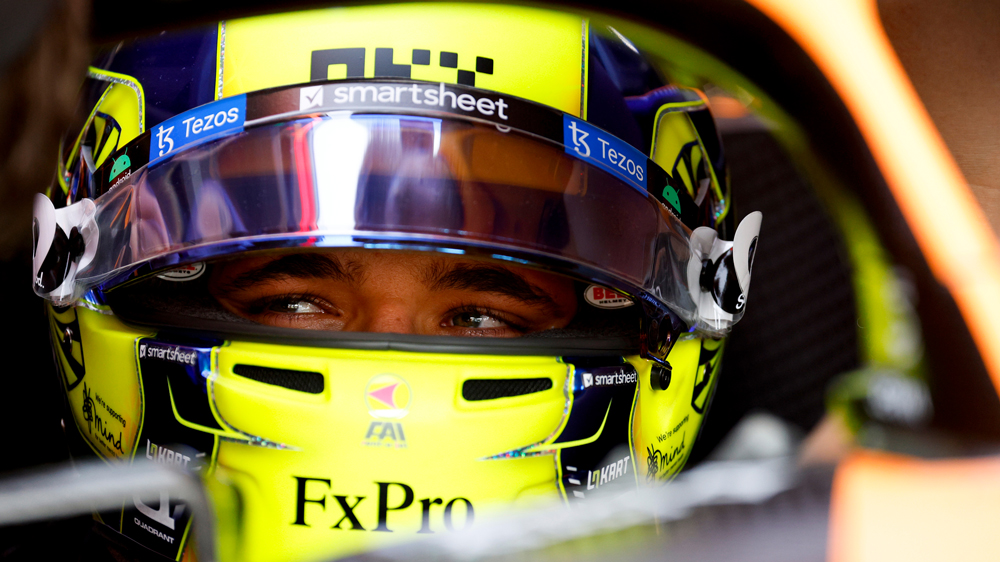 In 1963, when 26-year-old Bruce McLaren first entered the starting grid under his own eponymous banner, few would have guessed that, even after the tragic passing of its founder six years later, the McLaren team would continue to be a dominant force in Formula 1 to this day. It’s a legacy that includes eight World Constructors’ Championships and 12 World Drivers’ Championships, the latter starting with Emerson Fittipaldi and continuing with James Hunt, Niki Lauda, Alain Prost, Ayrton Senna, Mika Häkkinen and Lewis Hamilton.

Since 2019, Lando Norris has taken up McLaren’s mantle, both on the racetrack and as the team’s ambassador during a time when Formula 1’s global popularity is at an all-time high. The 23-year-old, who has secured one pole position and finished on the podium six times during his relatively nascent F1 career, will finish in seventh place this year while McLaren takes fifth among constructors.

As the 2022 season comes to a close with today’s Abu Dhabi Grand Prix, Robb Report shares a recent conversation with Norris on his rise through the motorsport ranks, what it’s like to compete with his childhood heroes and why his constant travel has become far more tolerable.

How would you define your career path to Formula 1?

My transition was a little bit different to that of a lot of people in terms of my route to Formula 1. I was always patient, always took one step at a time to learn and give myself time to develop and improve as a driver. And I never spent more than one year in a category—I just did more categories than what most people currently do. I started with karting at six years old, pretty much through my Dad, fell in love and that was pretty much what I wanted to do.

How did McLaren become your home?

In 2016, I won a British Racing Drivers’ Club competition that was partnered with McLaren, and the prize was to drive for McLaren on the simulator. And then I won that and things slowly progressed from there. My performance was good, my accuracy was good, and our talks continued. I went on to be a junior driver for them and had a full-time job with the team in 2017.

For 2018, I was driving Formula 2 and finished second that season. I was also in McLaren’s mandatory tests for young drivers and was put into some free practice sessions with actual [Formula 1] race drivers at the time. My performances were very good and halfway through 2018, they [McLaren] told me I would be their driver for 2019. I remember the whole conversation perfectly, it was pretty amazing and memorable because of it being such a life-changing opportunity.

Does the storied legacy of McLaren add any pressure for you behind the wheel?

When joining Formula 1, there’s always going to be pressure no matter what team you’re with. But McLaren is a team I grew up watching, especially 2007, which was Fernando Alonso and Lewis Hamilton. I know what McLaren has achieved in the past. For me, the added pressure is the fact that they are a team with some of the best drivers ever in Formula 1: Fernando Alonso, Lewis Hamilton, Ayrton Senna, James Hunt, Niki Lauda and [Alain] Prost. You know, all of these people that have been with McLaren, and then I’m that next one who’s trying to score some amazing results for them and create history with them. So there is always that little bit extra, but I try to never think about it. I just try to enjoy my time with the team and make it feel like home.

After cheering on Lewis Hamilton and Fernando Alonso as a kid, what’s it like to now be competing against them?

It’s pretty surreal. I was watching these guys on TV and thinking how amazing they are—and that hasn’t changed, I still think they are incredible. As a younger kid, I dreamed of meeting them, and now I’m actually getting to race against them and trying to beat them. It’s a blessing and something I will treasure—getting to race against drivers like Lewis, Fernando and [Sebastian] Vettel.

Describe what it was like to pilot a Formula 1 car for the first time.

You get in the car, fire up the engine and feel the vibrations. Then, driving out of pit lane, you turn the pit limiter off and you get that first sensation of the acceleration of a Formula 1 car, just how unbelievable it is—because it’s incredible. But then, one of the biggest shocks for me was braking. Hitting the brakes for the first time, your whole body is in shock at just how quickly the thing stops. You feel like you’re going to miss the corner, and then it just stops and you realize “oh, I’m actually going too slow now” and you’ve got to speed up again—that’s probably what surprised me the most.

With the FIA’s new regulations for the cars this season, what was the biggest challenge to overcome as a driver?

I’ll list two things. One is that the car is a lot less comfortable to drive; it’s a lot worse over the bumps and stiffer, so how you drive it on street circuits is a lot different. And then you have what it’s like when racing other cars and the strategy involved because of these differences compared to previous years . . . you have to manage the tires less in some scenarios, more in others . . . how you prepare yourself and actually race other people is quite different. But the whole reason for these new rules is to create better racing, and that’s exactly what they’ve done.

What has been a highlight for you this season?

It’s my podium at Imola [2022 Emilia Romagna Grand Prix]. It was my only one this year, sadly, but I was very happy with it. In a way, I think it was one of my best podiums, one of the most deserved because of the job I feel I did that weekend. It was a very difficult weekend, in general, with the weather, but podiums are always very special, so it has got to be that.

Considering how much you crisscross the globe, what are your top travel tips for staying at your best?

Sleep is one of the most important things that people take for granted sometimes. And comfort. Being with Tumi, I carry a lot of cases around. I also have my rucksack and my carry-on case so I can have my laptop and an extra pillow on the plane. I can sleep when I want, I can play my games or listen to music—all of those things—when I want. I can even bring my Tumi golf bag. At the same time, I’m a young guy who wants to look cool and all that nonsense. And all of Tumi’s stuff looks amazing.

Which piece of travel gear is your mainstay?

My Tumi backpack is something I pretty much take everywhere, whether it’s for a fun day out, or to go to work. And then, if I need more, there’s the case that it slides onto for my pillow and gaming laptop for the plane.

What elements of Tumi’s new McLaren series stand out to you?

Among the big things are the materials used; the use of carbon fiber, which is extremely lightweight and extremely strong. I love the look of the carbon fiber, especially in the sun. So, it’s Tumi’s transfer of all of these materials to make something reliable and have a high level of performance. It’s the look of things, the feel of things and the weight; I have one of the best flowing bags, meaning that if I let go of my bag it will just run off without me, so that makes my life a lot easier. In the end, it’s the performance that counts.

What advice would you give a young fan that wants to be the next you?

If you think you’re working hard, you’re not working hard enough. Work harder than that. That’s probably the main thing. Secondly, do whatever you can to enjoy it. If you really care about it and want to succeed in it, you’ve got to love what you’re doing. There are going to be tough times so work harder than you think you need to, but at the end of the day, enjoy everything you do.