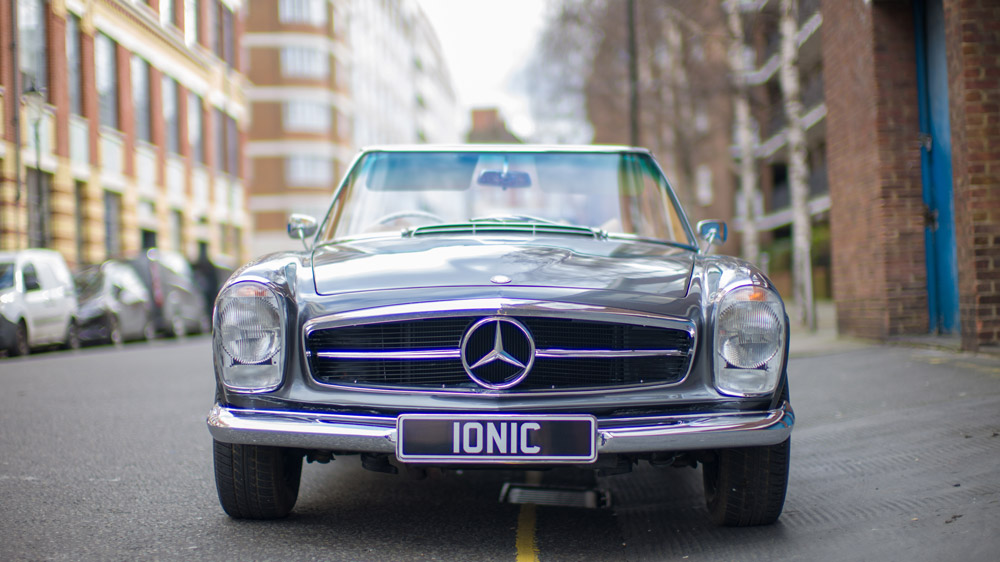 The Mercedes-Benz 230 SL, produced from 1963 through 1971 and commonly referred to as the “Pagoda,” is known for its open-topped glamour, double-wishbone front suspension and, like most classic cars of that era, not entirely eco-friendly credentials. Which is where Ionic Cars comes in.

Transforming beautiful vintage cars into full electric models, the new company is the brainchild of UK-based, ex-fintech entrepreneur Justin Lunny. He and his team have bought up classic models, including E-Type Jaguars, Porsche 911s and Mercedes-Benz Pagodas, with the aim of offering them as zero-emissions examples.

The first models will be on the road in June, costing from $200,000 to, for the Pagoda, $300,000. Customers can request everything from vegan leather to heated seats and matching luggage. For those who worry that the collectible value is taken away, the process is fully reversible, with the engine encased in Perspex (a branded version of acrylic glass) for the owner to do with as they wish. The cars can also be made with left-hand drives and be shipped around the world.

An electric version of the Mercedes-Benz “Pagoda” by Ionic Cars.  Photo: Courtesy of Ionic Cars.

“I am a car lover, always have been,” says Lunny. “Once I had children, though, I started looking at electric cars and emissions became more important to me.”

His logic is that most of these gas-guzzling old showstoppers will be unusable due to emissions legislation in 15 years or so, and he saw a gap in the market for people who wanted an exclusive model without the hefty upkeep.

“It is for people who have loved these cars but never dared to own them, perhaps they don’t want the bother of checking oil on a dipstick—they love the idea of being seen in one but not the ownership challenges of a classic. With these, there are easier to handle elements, like regenerative braking and no gears.”

Customers can request everything from vegan leather to heated seats and matching luggage.  Photo: Courtesy of Ionic Cars.

The cars are converted over a period of roughly six months in the UK’s West Country. Ionic will initially produce approximately three every month, each with the ability to cover 160 miles per charge. According to Lunny, that’s the perfect range “for popping to a Michelin-starred lunch and back.” Well, at least where he lives.