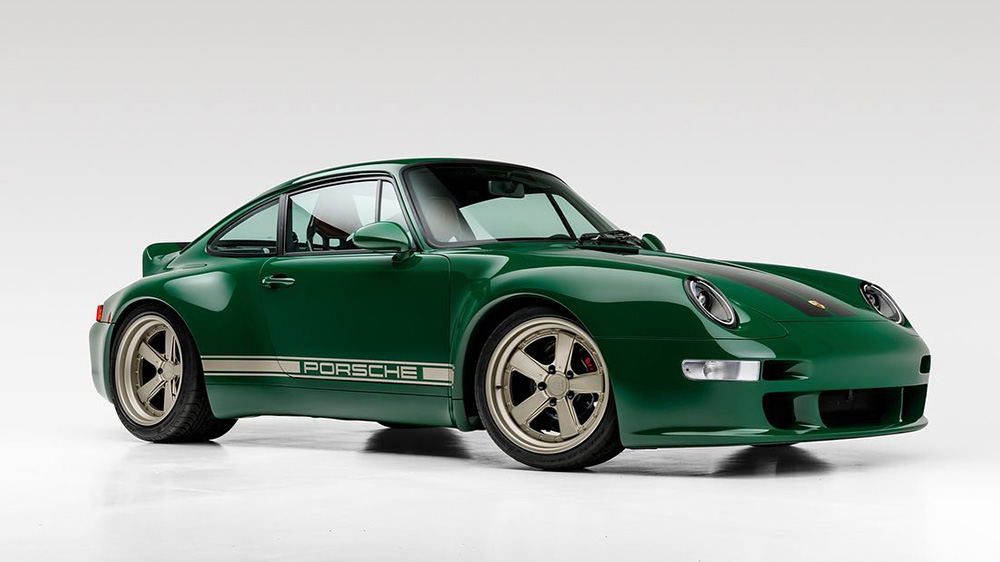 Gunther Werks’s latest Porsche 911 build is sure to make gearheads turn green with envy. And right in time for St. Patrick’s Day no less.

The Southern California custom shop has just unveiled its latest remastered 993-generation 911. While you could argue that many of Gunther’s commissions are showstoppers, that’s especially true of this example, which comes finished in a rich coat of Irish Green.

Like other remasters, the Irish Green Commission, as the shop refers to it on Facebook, began life as a regular old 993. If you’re wondering why Gunther Werks is so fixated on this particular 911 generation—which was built between 1994 and 1998—it’s because it was the last to feature an air-cooled flat-six engine. The sports car is then completely torn down and reassembled with new upgraded parts and elements installed as needed.

In the case of this commission, that meant outfitting the the car with a new, custom carbon-fiber body panel. Once the new pieces were in place, the car was coated in a gorgeous coat of Irish Green. This emerald hue is broken up by two striking design flourishes: a set of exposed carbon-fiber racing stripes down the center of the vehicle and soft gold stripes and a Porsche decal that run just above the bottom of the car, between the two sets of wheels. Rounding out the exterior is a set of five-spoke, Fuchs-style rims in the same shade of gold.

Just as much care was paid to the interior of the vehicle. The cabin and its carbon-fiber bucket seats have been done up in a mixture of English tan leather, charcoal Alcantara and exposed carbon fiber. This color combo, along with a green tachometer, is a striking complement to the vehicle’s exterior. The buyer also requested Gunther Werks’s touring specification, so thicker leather and sound-deadening material was used to ensure a quiet drive.

The Irish Green Commission gets its power from a 4.0-liter flat-six from Rothsport Racing. Mated to a manual transmission—the shop does not hide its allegiance to the stick shift—this potent mill produced 435 horses and 335 ft lbs of twist. Other mechanical upgrades include a reworked suspension, with components from Eisenlohr Racing and JRZ Suspension Engineering and new Brembo brakes.

The Irish Green Commission is one of just 25 remastered 993-generation 911s that Gunther Werks plans to build. Each example starts at $585,000. That’s more than $400,000 above the starting price of the brand-new 992-generation 911 GT3, but considering how good the car looks, we can see why.