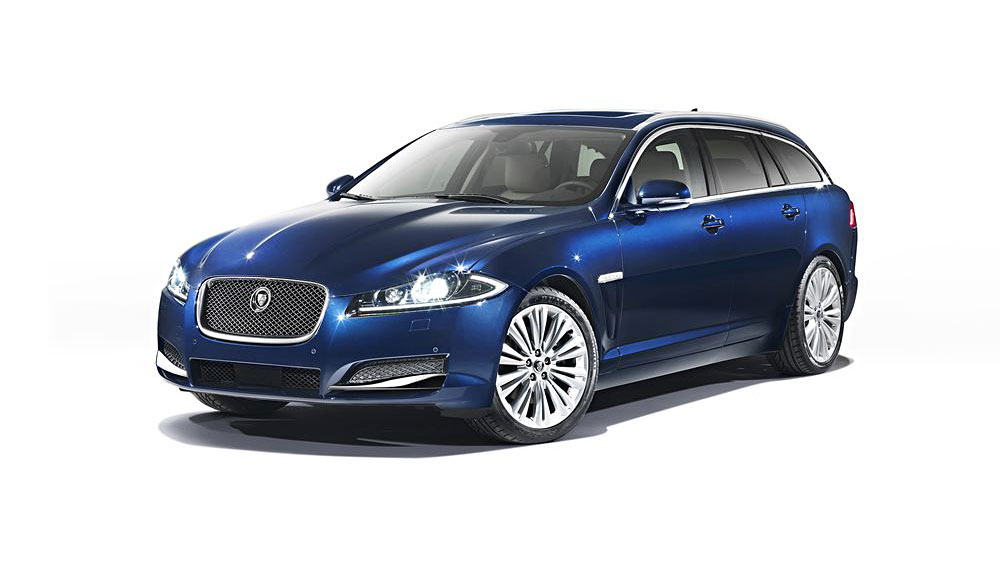 It’s a testament to the mechanical excellence and enduring beauty of Jaguar’sXF that five years after its debut it remains a supremely compelling choice among executive-class sedans, squaring off against the new Audi A6, BMW 5 Series, and Mercedes-Benz E-Class. This year, building on its midsize momentum, Jaguar unveils the XF Sportbrake, its first station wagon since the best-forgotten X-Type Sportwagon of 2004. Masterfully building on the XF sedan’s winning looks, the Sportbrake lands in Jaguar showrooms in the United Kingdom this fall. At this point, the company has no plans to bring the car to America, which is a genuine shame; it’s a beauty. Just of two-tenths of an inch longer than the sedan and a modest 154 pounds heavier, the Sportbrake gives up none of the XF’s oft-praised road manners.

Although the XF Sportbrake’s Atlantic crossing seems iffy at best, the U.S.-spec XF sedan enjoys a host of subtle but significant upgrades this year. The restyled front end evokes Jaguar’s flagship XJ, with a new hood, fascia, and fenders, and slimmer bi-xenon headlamps with LED running lights in the now-familiar “J-Blade” shape. And in back, new taillamps feature LED elements.

The big news on the inside may be the debut of a 1,200-watt, 17-speaker Bowers & Wilkins audio system; it’s standard on the XFR and a worthwhile $2,300 option on the other XF models. The 2012 XF’s passenger compartment also carries finely tailored new seats and a thoroughly revised instrument panel. Sitting on the center console is a new 7-inch touchscreen display that manages navigation, entertainment, climate, and connectivity functions. It’s not quite as bright as the TFT screens in some of the XF’s rivals, but it does feature a polarizing filter that greatly improves contrast. And the system seems quicker-witted than before; animated menus are snappier and sharper looking. Last but not least, Jaguar has replaced the tiny, fussy touch-sensitive bull’s-eye that opened the glove box with an actual button.

As before, the XF arrives in four versions: the standard XF and the luxury-laden XF Portfolio feature a sweet 5.0-liter V-8 producing 385 hp; the XF Supercharged employs a forced-induction version of the 5.0-liter engine delivering 470 hp; and the racy XFR ups that figure to 510 hp. Each version delivers its power to the rear wheels through a 6-speed automatic transmission. Prices for the 2012 Jaguar XF range from $53,000 for the standard model to $82,000 for the XFR. (www.jaguarusa.com)