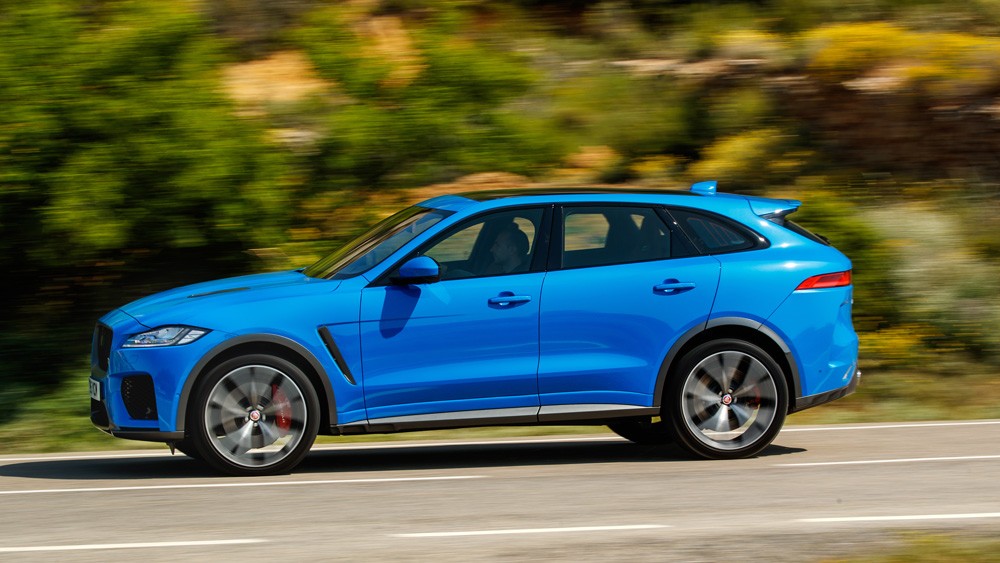 The Jaguar F-Pace SVR’s character is distinctly different from European high-performance SUVs with “New Wave” twin-turbo V-6s and V-8s. Instead of that whoosh of depthless turbocharged torque, which can feel like riding on a gust of air, the F-Pace SVR’s 5-liter supercharged V-8 provides a spectacularly visceral experience, delivering growling, ferocious thrust in precise mechanical fashion.

With 550 hp and, just as importantly, 502 ft lbs of torque, the vehicle can be catapulted with style from a standstill, or in highway contests of speed. This highly evolved supercharged engine can be likened to a fine mechanical watch, the whirling supercharger its tourbillon. Old ways are oftentimes the best.

The F-Pace shares alloy architecture and thus fundamental suspension design with the F-Type sports car. Think of it as an F-Type Tallboy. It also shares the same fundamental all-wheel-drive system as the top-spec F-Type.

On a 50-mile mountain passage between Highway 101, south of Monterey, and Interstate 5 in the California Central Valley, SVR was agile and unflustered in turns that often have major elevation change and mid-corner dips, and corners that suddenly tighten instead of unfurling. SVR was composed under heavy braking at the end of long straights piercing high mountain meadows.

Jaguar Land Rover’s chassis engineers have a deft touch. Even with 21-inch wheels and tires, the F-Pace SVR has a compliant ride in the Comfort setting, ideal for devouring hundreds of miles of highway, or contending with the badly broken roads of my native Los Angeles.

The Porsche Macan Turbo has long been the benchmark in this narrowly specialized field of high-performance mid-size SUVs, but SVR offers equal or better performance in virtually every measure. Lighter and with a significant power advantage—nearly 100 ft lbs more torque, and 116 more horses—SVR is two-tenths quicker than Macan Turbo in every American’s favorite stoplight drag race to 60 mph. Those tenths matter less in daily life. The story is how differently the two deliver power and speed. It’s all about that V-8.

The interior is high-tech, but not over-the-top.  Photo: Courtesy of Jaguar Land Rover.

In a market seemingly governed by the Grille Wars, each luxury carmaker striving to create a larger and, in some regards, more grotesque mouth to give “road presence” at 100 yards, Jaguar is restrained, like Lexus once was. Crisp character lines that define fenders, shoulders, hood and roof all emanate from the corners of a lovely mouth inspired by the grille of the definitive 4-door Jaguar, the XJ6 of the late 1960s. Nothing Baroque, nothing Rococo about the bodywork. It’s hard to make any SUV look svelte or significantly different from the others, but Jaguars wear cleanly tailored clothes with simple, elegant lines that drape nicely.

Flowing curves continue inside. The F-Pace is within roughly an inch up or down of every interior measurement of the Macan Turbo. Interior materials are in the Lexus range, meaning very nice, but not over the top. Rear seats are upright to accept children’s booster chairs, a family of four that no longer needs strollers can travel for a long weekend away. A one-and-done family can travel in comfort for a week.

F-Pace SVR’s touchscreen menus are logical, and owners should settle in easily. I’m long past criticizing any of these systems because most are dominated by Apple CarPlay’s menu logic. And one only rarely comes across features that are just plain foolish, like the Maserati system that places low-speed parking camera controls two menu layers deep on a touchscreen. Jaguar has developed a team of graphic interface geeks who do a pretty good job. Airflow graphics for HVAC are rendered in a cool gray-green. Reluctant as I am to ever engage active intelligent cruise control systems, Jaguar’s system worked beautifully over a 100-mile stretch of boring old I-5 heading south to Los Angeles from a Harris Ranch breakfast stopover in the Central Valley.

At $90,000, and with every feature one could desire, SVR is about $13,000 less than a comparable Porsche Macan Turbo. But it really comes down to aesthetics, to taste, to how you like your speed served up. In the 800 miles I racked up traveling between Los Angeles and Pebble Beach recently, over mountain roads, two-lane highways and interstates, Jaguar’s F-Pace SVR never failed to impress.