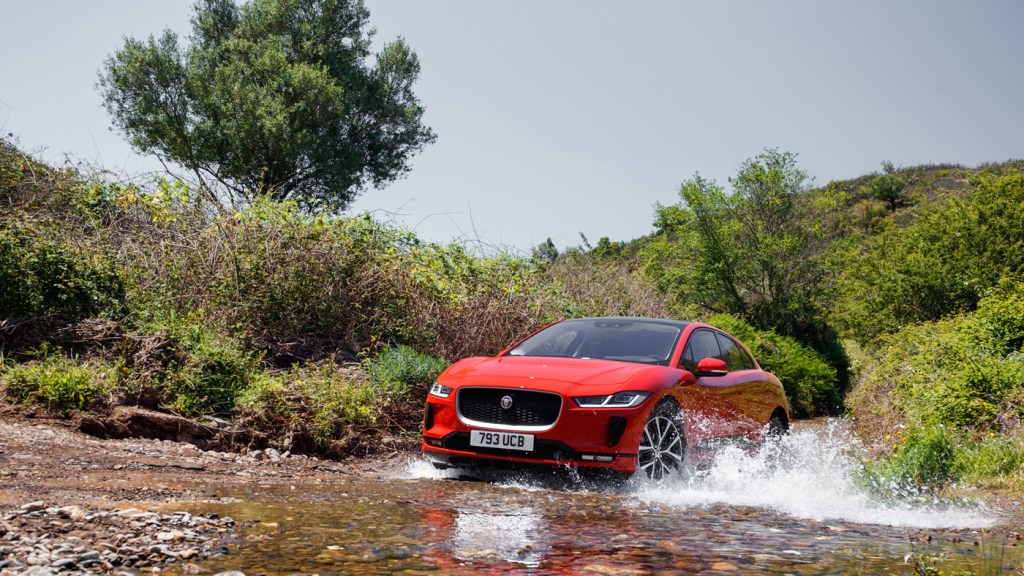 A bow wave pushes ahead of the all-new, all-electric 2019 Jaguar I-Pace as we wade through a murky pond about 18 inches deep; this we knew because the I-Pace’s surround view cameras showed it to us in real time on the center screen, as if there was a sparrow hovering about 30 feet above us holding a camera. (And here you thought surround view cameras were there to help you park.) Suddenly, the thought occurs to me that we’re in an electric car. In the water. Last I heard, we weren’t supposed to use electric appliances near the bathtub, and here we were inside one giant, leather-lined hair dryer.

Fortunately, the risk of electrocution is pretty much nil; electric cars are well-sealed enough to endure heavy rainstorms, but Jaguar went the extra step of sealing it such that it can wade through water as deep as roughly 20 inches—at least when the standard air suspension is lifted to its highest setting, giving it two additional inches of ground clearance.

Soon the I-Pace climbs up the muddy bank and out of the water, at which point we are directed straight up a seriously steep, rock-strewn dirt trail that one might attempt more willingly in something made by Jaguar’s sister brand, Land Rover, than a vehicle poised to give Tesla’s Model S and Model X their greatest competition yet.

But thanks to a bevy of electronic traction aids and two motors, one for the front wheels and one for the rears, the I-Pace is able to apply whatever measure of its 394 hp and 516 ft lbs of torque is deemed necessary to keep its massive 4,800 pounds moving. The I-Pace walks up that hill as if it was a pitcher’s mound. At the crest, we were rewarded with a beautiful view of the foothills of southern Portugal’s landscape. Directly in view—just a few miles ahead—was Autódromo Internacional do Algarve, one of the world’s most challenging racetracks. Our next destination.

Not many automobiles on the market today (or, for that matter, ever) can climb a rocky hillside with utter confidence and, just a few turns later—on the same tires—hit the racetrack with equal aplomb. But there, in Portugal, the I-Pace did exactly that. Jaguar estimates that the I-Pace will leap from zero to 60 mph in just 4.5 seconds, and it feels even quicker thanks to the characteristic instantaneousness outlay of all available power from a dead stop. Our test cars all rode on the I-Pace’s largest available wheels, big 22-inchers. The two-laners that Jaguar chose for our drive route was a mix of sweeping curves and tight, unpredictable corners. The I-Pace dove in and clawed at the asphalt tenaciously, thanks in part to the anchoring effect of a 1,329-pound battery nestled under the floor of the car.

Even more remarkable is how neither skill set falls in line with most folks’ expectations of electric cars. Tesla has opened a few minds to the idea that electric cars can be fast cars, but high performance is generally seen as antithetical to high efficiency and so has yet to be associated with electric cars. Even fewer think of them as belonging off-road. After all, if you run out of juice on the street, you can always call for a tow truck or a nearby plug. If you run out of charge off-road, you’d better hope that whoever rescues you has brought a very long extension cord.

So how does the I-Pace go about its job as an electric car?  Our first impressions are very favorable. Jaguar claims that the vehicle can travel 240 miles on a single charge, according to the EPA’s test cycle, or about 300 miles if you use the Euro model. That’s right there with the Tesla Model S and X, and even after our full day of driving, we still had about a third of the battery’s capacity left.

While charging stations are hardly abundant in Portugal, getting juiced up when and where it is convenient is as challenging there as it is in the United States. But when you find facilities, the I-Pace can make good time getting its charge on, filling some 80 percent of its capacity within 40 minutes, should you happen to find a charging station with 100kW DC outlet. With the 7-kW AC home charger, an 80 percent charge takes 10 hours, another figure that’s not far out of line with Tesla models.

Like most electric cars, the I-Pace has very strong regenerative brakes, but the driver can choose between reasonably normal throttle and brake pedal feel and a more aggressive “single pedal driving” mode that can slow the car with up to 0.4g of force without requiring the driver to touch the brake pedal, with the recaptured energy directed back to the battery to extend driving range. I found the one-pedal driving style to be a little unnatural and jerky when tackling the twisties in northern Algarve, but the villages and cities—where stop-and-go is more prevalent—proved a better opportunity to enjoy its unique feel. Speaking of unnatural, the I-Pace emits a distinct whirring noise inside the cabin—an artificial sound presumably designed to assuage people who are uncomfortable with silence. Fortunately, the system can be disengaged; after all, isn’t the silence of electric driving one of its coolest aspects?

Where the I-Pace surpasses every other electric car on the market today is in the realm of luxury. The interior is wide and airy, rendered in contemporary materials, with a conventional ergonomic layout and controls that don’t require graduate-level coursework to figure out. The luxury quotient is suitable to the Jaguar brand, a mix of materials and design motifs that afford it a great sense of occasion with nary a whiff of the pipe-and-slippers atmosphere that characterized your grandfather’s Vanden Plas. The rear seating area is remarkably roomy and accommodates three adults.

Rendered in contemporary materials, the I-Pace’s interior is wide and airy.  Photo by Steve Siler.

If there’s anything we wonder about, it’s the styling which, thanks to its cab-forward design, looks a bit less premium and certainly less slinky than most Jaguars heretofore. The stubby, flat nose and abruptly chopped rear bear little resemblance to the long-legged sedans and coupes of Jaguar’s past. It still looks very Jaguar-like, however, embracing what appears to be a combination of the company’s car and SUV design idioms.

A few design details are worth appreciating in particular, starting with the grille, which doesn’t actually allow any air into the front end but rather directs it up and over the car through an extractor in the middle of the hood. As that air makes its way back, it passes under a rear spoiler, which Jaguar claims will keeps the rear window so clean there’s no need for a rear wiper. We also noted how different the I-Pace looks in various colors, appearing best, we thought, in muted metallics or a cool white.