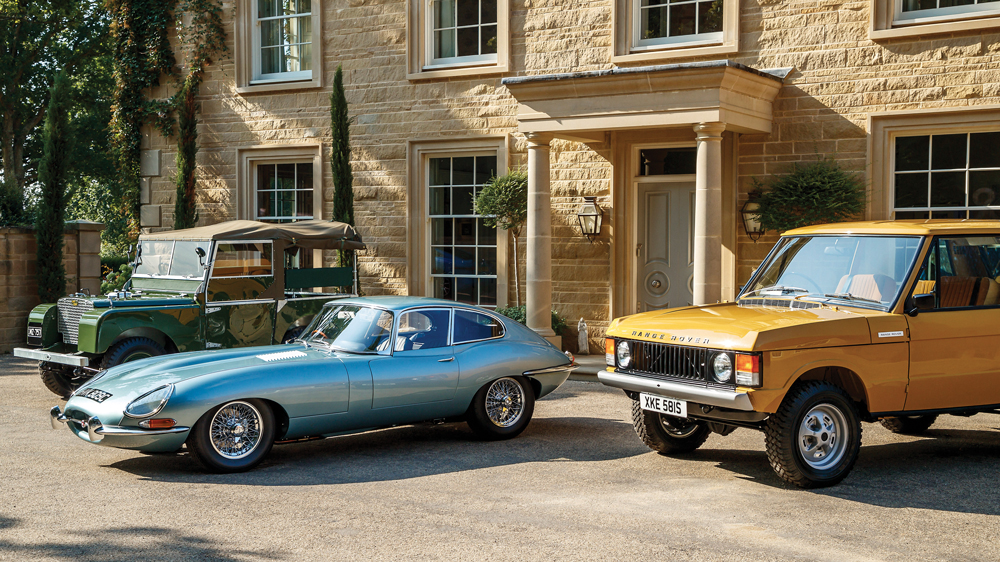 No other part of England is more quintessentially English than the verdant furrows and brows of the South Downs that sweep the British coastline. In their expansive lap sits the magnificent country estate of Goodwood, home to the Duke and Duchess of Richmond.  If you burrowed into Goodwood’s chalk-and-flint earth, the sediment would no doubt release into the salty air echoes of Elgar, cream teas, Churchill, cricket . . .  centuries of keenly British traditions, with manicured parkland and velvet golf courses.  Ingrained, too, in the soul of the estate is a rich seam of British automotive heritage. Just after World War II—in 1948, to be exact—Freddie March, the current duke’s grandfather, opened the Goodwood motor circuit for world-class racing. That same year, the very first Land Rover was unveiled to the world.

It’s no small wonder, then, that the most British of car brands, Jaguar Land Rover (JLR), took advantage of this September’s Goodwood Revival, which celebrates the circuit’s heyday of 1948 to 1966, to launch the three icons in its Reborn “new classics” series: the Land Rover Series I, Range Rover, and Jaguar E-Type. The JLR Reborn Series is a clever move that capitalizes on the growing appetite worldwide for “new” classic cars, meaning either continuation models—for example, built new from scratch but to the original blueprints, with the original chassis numbers and original production processes (see the Jaguar XKSS, Aston Martin DB4 GT, and the planned Jaguar D-Type, all worth more than $1.3 million)—or restored from donor cars in poor condition, using refurbished original parts and painted in original colors with interiors that mirror the original style  and materials.

Fortuitously for the two marques, this global demand coincides with the increasing popularity of old Land Rovers (see the uproar over scrapping the Defender in 2016) and the enduring love of the E-Type. So JLR’s Classics division is now in the business of sourcing highly prized original examples of the Series I (1948 to 1958), Range Rover (1970 to date), and E-Type (1961 to 1974) and then painstakingly restoring them for private customers to brand new condition, complete with warranty.

Unlike the aforementioned continuation cars, many of which will be retained simply as static art investments, customers of Reborn Series cars want the beauty of the original but with the comfort and reliability of modern engineering so they can use them on the road. It makes sense, but it comes at a cost: New classics either come in limited numbers or arrive on the market after the sourcing and restoration process, which takes roughly one to two years. You also have the challenge of getting onto the order books in the first place; the company is inundated.

The nature of this sort of purchase means not many Reborn cars are bought and flipped for a quick profit in the manner of Porsche 911 special-edition models, for example. A lot of private memories go into these requests, such as the customer who wanted Land Rover to source and restore a particular Series I built in 1949 and exported to Botswana in May of that year. While Land Rover couldn’t track the very same car, it did find another from the same period.

The company has taken a different approach to each of its Reborn models. First up, the one that started it all: the Land Rover Series I, or simply the Land Rover, as it was known when launched in 1948 (“Series I” was a retrospective badge that came out with the Series II). Twenty-five examples of the Series I Reborn were announced in 2016; the team now has orders for 80. It will cost you close to $125,000 depending on how you spec the car, which wheelbase it is, and how old it is.

Robb Report was given rare access and got behind the wheel of a 1949 80-inch wheelbase Series I for a spin around Goodwood and those picture-postcard lanes. Although there’s a keen sense of history brought back to life in uncanny fashion when you climb aboard and smell the gas, oil, and hot metal, this is frankly not an easy car to drive—history is all too present in the lack of power steering, for a start. Unless you have well-developed biceps and calf muscles and have mastered the art of double declutching, you’re going to struggle. Reach inside the fabric roof (an optional extra, along with doors, in 1949) to pull the door lever, climb aboard the green leather bench seat (no seat belts), turn the key, and blip the throttle to get the little 50 hp engine going.

With no power steering, a heavy metal clutch pedal, and a stiff gearbox, you need all the energy you can muster to drive this thing at low speed. Out on the lanes, though, with the metal flap below the windscreen pushed open for air, the engine chugging happily in fourth gear, and the steering lighter at 40 mph, it’s a lovely thing. For off-roading, the simple low-ratio gearbox is engaged via a big red knob on a long lever, which will take the car right back to its agricultural roots.

I’m not one for utilitarian driving; however, my heart has always belonged to Land Rover’s luxury arm: the Range Rover. We were allowed behind the wheel of a pristine car from 1978, the year I was born. This car has fared better aesthetically than I have, but then only one of us at 40 has had cosmetic attention and no kids.

You can spec your Range Rover Reborn with the original hose-out vinyl, but in the interest of not sweating profusely, most customers choose the upgrade option of ’70s brushed nylon. You can have wing mirrors on the doors or in their original position on the hood, a classic modern radio fitted with DAB and a satnav touchscreen, or a cigarette lighter to charge your phone, and you can add headrests and rear seat belts to the bench seat—although both ruin the purity of the original lines. The interior palette is the original four shades of palomino (basically beige). One customer wanted red carpets in the footwells and was politely told that, while it was possible, it might be better to go away and reconsider.

This is a relatively easy car to drive, with a synchro mesh to blend gears and engine speed, a huge steering wheel, thin bodywork, and large windows for easy maneuvering. First gear was elusive on our example, but only because the car has so few miles on it that everything needs to settle in. No matter: The torque from the V-8 engine means the car pulls away smoothly in second. There’s a lockable differential for off-roading, but this is a model whose peerless industrial design earned it a spot in the Louvre in Paris—we wouldn’t dream of coating it in mud.

JLR is producing 15 original Range Rovers this year, at a cost of roughly $223,500 for the very early ones and $184,000 for later ones, and another 15 next year. All are sold. The brand will continue to source to order, however, and look for as many dry-climate donor cars as possible.

In the meantime, there’s always the option of a $387,900 Jaguar E-Type Reborn for the collection. An initial 20 examples were announced two years ago, and the orders stretch into another year’s work already. If it sounds pricey, consider that you can easily pay more than $650,000 for an original E-Type at auction these days, and the Reborn one will come with brand-new engineering to match the Swinging Sixties vibe. There are plenty of variants to choose from: a coupe, a convertible, a 3.8- or 4.2-liter engine, and so on. You’ll have to wait 14 to 16 months for the finished article while the team fits new floors, sills, and kickboards, and X-rays the engine and gearbox to check that the chassis numbers haven’t been over-stamped—which would mean a dodgy provenance that’s best left alone. If it’s okay, there will be new pistons, valves, wiring loom, and gear sets. Altogether, 3,000 work hours will be spent on the car before you receive it.

We piloted a 1966 pale-blue example around Goodwood’s lanes. The E-Type is always an utter joy to drive, with that long nose sniffing the air, the glossy wooden steering wheel turning easily on  the move, the smell of leather, carpet, and gas mixing with the floral hedgerows, and a sublime suspension setup that soaks up nasty jolts. The Reborn E-Type feels both wonderfully historic and also apposite today, which is in part credit to the Reborn engineers, but more so to the original spirit of this timeless car.

Indeed, it is the immortal spirit of all three cars that has made JLR’s job so much easier today. The two marques have been gifted with three enticing automotive stories that never tire with the retelling; three dreams that continue to ignite the desire in customers to be chosen custodians of a very precious history.

The cynical bystander might say that JLR has taken advantage of one more British love: queuing up. Those waiting lists are getting longer by the month; we suggest you get in line now.