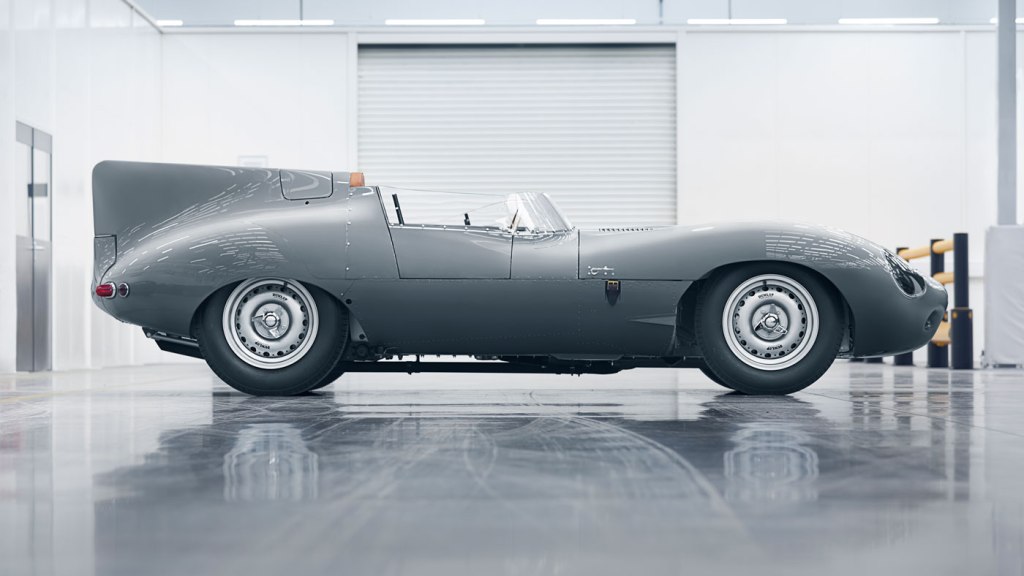 Motor racing in the mid-1950s could be likened to the Wild West, where old-timers like Mercedes-Benz, Maserati, and Alfa Romeo were being challenged by upstarts like Ferrari and Porsche, who were barely a decade old and already raising a ruckus on circuits around the world. That was a time when Jaguar was the dominant force on the tracks and on the streets, having previously introduced the XK120—the world’s first powerful series-production sports car—and starting America’s love affair with European marques.

The track is where Jag proved its mettle against Continental and American competition, and made a case with the C-Type, a snub-nosed racer derived from the XK120. Built from 1951 until 1953, it twice won the 24 Hours of Le Mans, but progress demanded a successor, and so the D-Type was unleashed in 1954. It promptly (and quickly, too) won Le Mans in 1955, 1956, and 1957.

Jaguar originally planned to build 100 examples of the D-Type racer, powered by the 3.4-liter (and later 3.8-liter) inline-6 engine from the XK120, wrapped in a tube chassis and gorgeous, wind-cheating aluminum bodywork designed by Malcom Sayer. Its notable vertical fin—aft of the driver—remains its aerodynamic trademark.

Now, Jaguar Land Rover Classic Works in Warwickshire, UK, has announced it will build 25 examples of the D-Type, the exact number of unbuilt cars remaining from the original production run. Resurrecting a more than 60-year-old design is a daunting task, one Jaguar is undertaking with a serious and respectful adherence to historic accuracy. The fact that original cars are highly valued—a 1955 example sold at Sotheby’s in 2016 for nearly $20 million—makes Jaguar’s decision to offer a period-correct continuation an easy one, thereby allowing a new generation of D-Types to compete in historic racing without exposing priceless originals to the terrors of the track.

The first Jaguar D-type assembled by Jaguar Classic is an engineering prototype debuted at the 2018 Salon Retromobile in Paris. Based on the 1956 Longnose specification, it features an extended hood, tail fin, wide-angle cylinder head, and quick-change brake calipers. Original Shortnose bodywork from 1955 will also be available, depending on the customer’s preference.

Continuation vehicles are nothing new to Jaguar Classic, with successful runs of the six unbuilt Lightweight E-Types completed between 2014 and 2015, and nine XK-SS models (essentially street-going D-Types) built in 2017 and through 2018. The idea, of course, is accuracy in every detail. And having the original Jaguar engineering drawings and factory records doesn’t hurt.