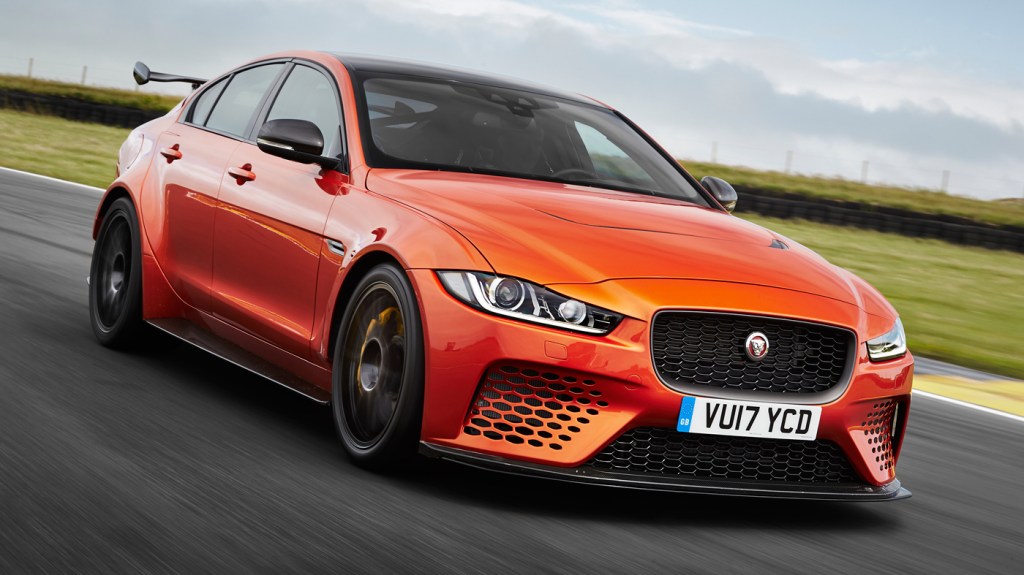 A compact cat with massive muscle, the new Jaguar XE SV Project 8 is the most powerful street-legal car ever created by the British luxury marque. The road-searing sedan is part of the Collectors’ Edition series from the Jaguar Land Rover Special Vehicle Operations (SVO) division and follows the Jaguar F-Type Project 7 from 2014.  But while it’s the second release in the exclusive line, the XE SV Project 8 presents many firsts for the brand.

Giving the four-door ferocity its brawn is a 591 hp, 5-liter supercharged V-8. The engine, generating up to 516 ft lbs of torque, makes its debut in a Jaguar that is not restricted to the track. The power train can launch the all-wheel-drive coupe from zero to 60 mph in 3.3 seconds and enables a top speed of 200 mph.

Also making those metrics possible is an 8-speed automatic transmission that can transition between gears in 200 milliseconds and be accessed from aluminum paddle shifters as well as a centrally located Pistolshift lever. The latter has never been seen on an XE model until now.

Performance is further boosted by Project 8’s Electronic Active Differential and Intelligent Driveline Dynamics systems that combine to constantly control torque delivery to the front and back wheels for greater traction, and a suspension with greater lateral stiffness for more precise response.

Complementing Project 8’s engineering is its mostly aluminum monocoque construction, aerodynamic body design, and weight-minimizing materials. Carbon fiber and composite comprise the hood (with an air extraction duct to decrease drag and increase cooling), the flared front wings, the front splitter, the front and rear bumpers, the side skirts, and the rear diffuser and wing.

As another innovation, the car is the only Jaguar to date to offer Track Mode—a circuit-specific feature that bolsters the vehicle’s efficiency and stability at speed. Among its many competitive advantages when activated is the optimal positioning of the rear wing, which works in combination with the front splitter and the car’s flat underbody to provide a 205-percent decrease in lift and approximately 270 pounds of downforce when travelling at 186 mph.

Optional carbon-fiber seats come with a four-point harness system anchored by a harness retention hoop at the back.  Photo: Courtesy Jaguar Land Rover.

The Project 8 is only available in left-hand drive and comes standard with a four-seat set-up. It can also be ordered, however, with just two carbon-fiber seats sporting a four-point harness system secured by a harness retention hoop that replaces the back passenger area. Creature comforts within the cabin include a 10.2-inch touchscreen infotainment display, iOS and Android connectivity, and an 11-speaker Meridian sound system.

Introduced to the world at the United Kingdom’s Goodwood Festival of Speed on June 30, the Jaguar XE SV Project 8 will have a production run limited to 300 examples. Although pricing for the United States market has yet to be announced, deliveries of the vehicle will begin in 2018.