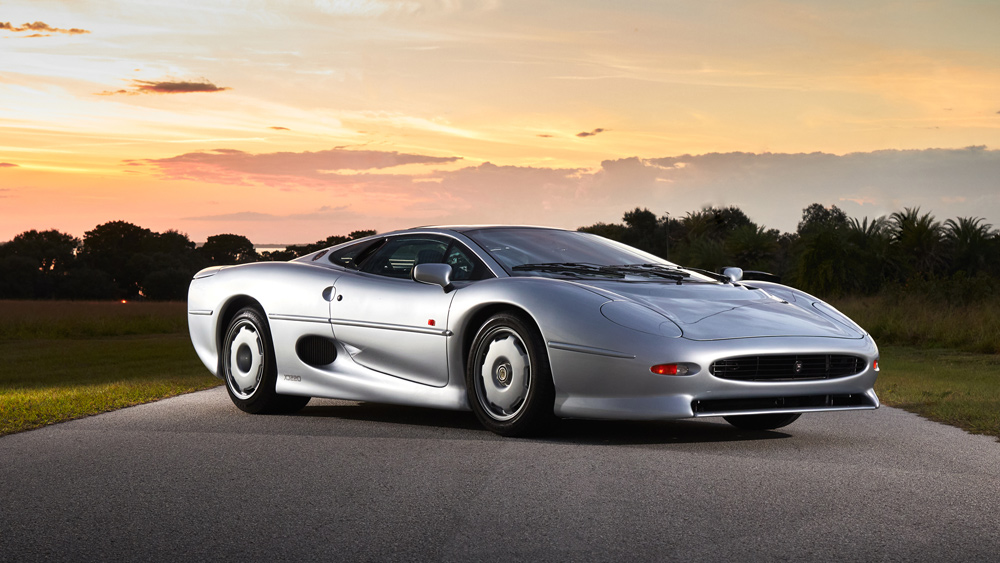 Jaguar is a carmaker steeped in tradition, a fact demonstrated more than 30 years ago when the marque’s then-new XJ220 was named in reference to its top speed, as was its estimable predecessor in 1948, the XK120. Despite being slightly optimistic (Jag’s XJ220 achieved a top speed of “only” 218 mph), it was, for a brief time, the world’s fastest production car. It certainly looked the part, and its supercar shape is precisely what continues to make it one of the most beautiful and enduring designs of its era.

The ultimate Jaguar was conceived by a small team of in-house engineers led by Jim Randle, and developed as an after-hours project by their “Saturday Club.” Automotive history buffs will be quick to observe that many innovative creations, such as the Lamborghini Miura, were the result of skunk-works dreamers bent on pushing the performance envelope, and the XJ220 is no exception.

The 1993 Jaguar XJ220 being offered at the RM Sotheby’s Amelia Island auction on March 5.  Photo by Rafael Martin, courtesy of RM Sotheby's.

Initially, the all-wheel-drive XJ220 was conceived to qualify for the Group B class of FIA racing and be capable of competing with the Ferrari F40 and Porsche 959. With Ford’s acquisition of Jaguar in 1989, corporate priorities shifted, and production of the model was turned over to Jaguar Sport, a subsidiary racing division partnered with Tom Walkinshaw Racing (TWR), builder of Jaguar’s XJR race cars.

The initial design was conceived with a V-12 power plant, a reasonable choice given the world-class competition from Italy and Germany, whose V-12 engines were the stuff of legend. Ultimately, a 542 hp, all-alloy turbocharged V-6 used by TWR for the 1989 XJR-11 racer—and developed from Austin-Rover’s Group B rally car—was chosen, in part due to its compact size for mid-ship placement behind the driver. Though modest in appearance and anticlimactic in sound, the engine nonetheless delivered supercar performance. Able to cover zero to 60 mph in 3.7 seconds, the XJ200 was quicker in that metric than both the Ferrari F40 and Lamborghini Diablo, while setting a new production-car lap record at the Nürburgring.

The XJ220’s shape is precisely what continues to make it one of the most beautiful and enduring designs of its era.  Photo by Rafael Martin, courtesy of RM Sotheby's.

Limited production of the XJ220 began in 1992, with only 282 examples made by the time manufacturing ended in 1994. When launched, excitement generated by the British supercar resulted in speculators driving prices well into the stratosphere. Over the years, those came down to earth, but are now on an upward trajectory once again.

Able to cover zero to 60 mph in 3.7 seconds, the XJ220 is quicker in that metric than the Ferrari F40 and Lamborghini Diablo.  Photo by Rafael Martin, courtesy of RM Sotheby's.

The Jaguar XJ220 is one of those complicated machines that requires attentive maintenance, regardless of mileage, which in this example shows just 1,130 km (about 703 miles) on the odometer. Benefiting from only incidental use and fastidious service by Don Law Jaguar in 2002 and 2016, this silver streak scored 9.995 at the Jaguar Club of Florida’s Concours d’Elegance, and was awarded Best in Class at the Hilton Head Concours d’Elegance in 2021.

This seldom-driven example shows just 1,130 km (about 703 miles) on the odometer.  Photo by Rafael Martin, courtesy of RM Sotheby's.

Finished in Spa Silver with a Charcoal interior, this XJ220 will be offered with no reserve by RM Sotheby’s at its annual Amelia Island auction on March 5. Collectors no doubt welcome another live, in-person sale, especially one that helps get the world’s auction train back on track after the pandemic’s derailment.