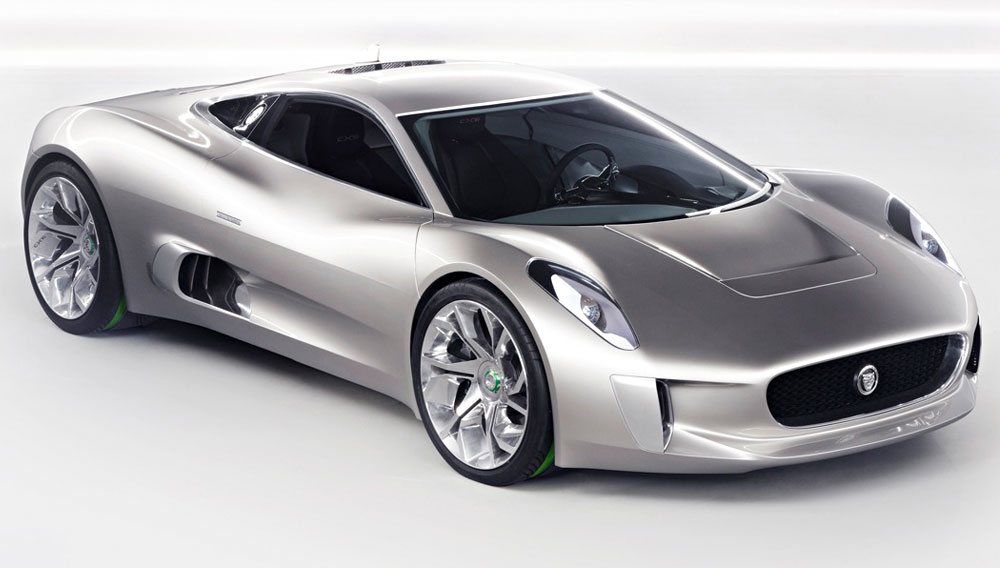 It’s not every day that a bona fide concept car — particularly a splendiferous flight of fancy like the Jaguar C-X75—makes the leap to the production line, but in this case it is happening. Introduced at last year’s Paris motor show, the C-X75 arrived to celebrate the English automaker’s 75th birthday. But the real gift—a production C-X75—will land in the driveways of 250 well-heeled enthusiasts in the not-too-distant future.

Mechanical details are sketchy at this point, but Jaguar has big aspirations for its hybrid supercar, the natural— and heretofore only — rival to Porsche’s 918 Spyder, which itself is currently following the path from auto-show star to production car. The C-X75 concept’s micro turbine hybrid power plant isn’t quite ready for prime time, so the production model will employ a high-strung 4-cylinder gasoline engine with forced induction, abetted by a pair of “powerful electric motors” and all-wheel drive. Performance should be scintillating: Jaguar estimates that 60 mph will arrive in less than three seconds, the 100 mph mark will pass by in six seconds, and the rakish two-seater will blast to a top speed well in excess of 200 mph. And in normal driving, the C-X75 will be able to cruise in 100 percent electric mode for more than 30 miles before requiring gasoline assistance.

The car itself — with a shape inspired by Jaguar’s artful 1966 XJ13 racer—makes use of a supremely stiff and lightweight carbon fiber composite chassis, developed with help from the Williams Formula One team. “Williams has always considered itself an engineering company, and so this project will allow us to combine our technical expertise to create something truly exceptional,” says Sir Frank Williams, founder of Williams F1

Jaguar hasn’t said exactly when the production version of the C-X75 will land, but the company plans to build a mere 250 handcrafted examples of the car, priced somewhere between approximately $1.4 million and $1.9 million. (jaguar.com/us)