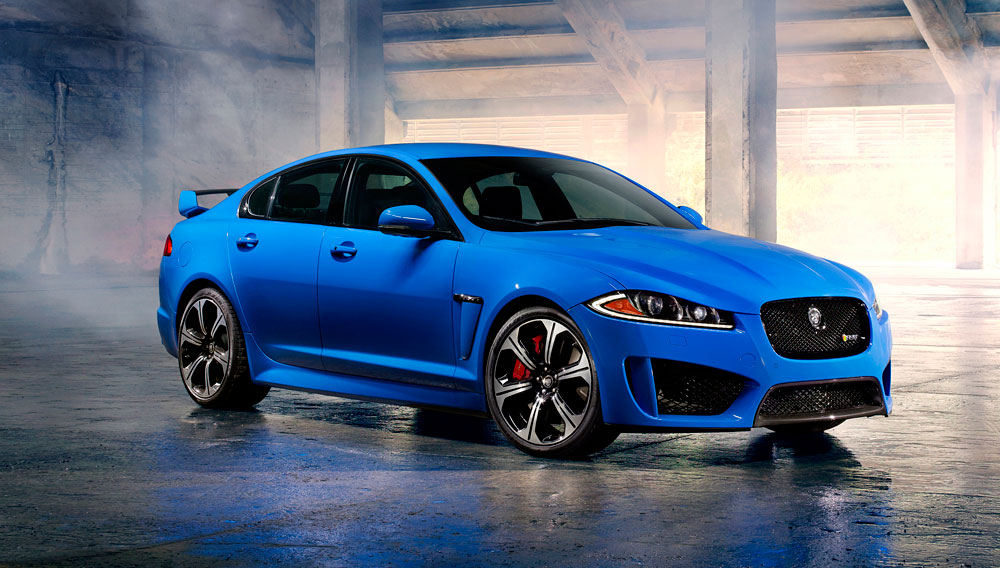 Since its model-year 2009 debut, Jaguar’s sensuous XF sedan has emerged as one of the British automaker’s greatest hits, with a lineup that has expanded to include a turbocharged 4-cylinder model, supercharged 6-cylinder models with rear- or all-wheel drive, and supercharged 8-cylinder models in two states of tune. Make that three: Later this year, the mighty XFR-S crowns the range. The second R-S model, after the fearsome XKR-S, the XFR-S packs a supercar wallop and a dramatic splash of track-ready style.

Beneath the hood of the XFR-S lurks the supercharged 5.0-liter V-8 that currently powers the extraordinary XKR-S coupe and convertible. Its 550 hp and 502 ft lbs of torque are bumps of 40 hp and 41 ft lbs over the supercharged V-8 in the XFR. The engine is matched to an adaptive 8-speed ZF ‘quickshift’ automatic with paddle shifters and it delivers the XFR-S to 60 mph in 4.4 seconds on its way to an electronically limited top speed of 186 mph. Oh, and thanks in part to a new engine stop/start system, the XFR-S’s fuel economy is identical to that of the XFR.

Of course, there is more to this ultimate XF than extra oomph. The car’s suspension has been stiffened and retuned to match its prodigious potential for speed, and a new, freer-flowing exhaust system trumpets the XFR-S’s supremacy. The car rides on 20-inch forged-alloy wheels fitted with specially developed Pirelli performance tires.

A revised front end accommodates larger intakes for increased airflow to the engine and a carbon-fiber splitter to decrease front-end lift at high speed. Rear-end lift is curbed by a diffuser beneath the new rear bumper and by one of two available deck-lid spoilers, including an optional towering wing with a bowed blade crafted from gorgeously exposed carbon fiber. The cockpit has been thoroughly smartened up as well, with carbon-look leather and dark aluminum-mesh trim. And should you tire of the engine’s howling exhaust note, the 17-speaker, 825-watt Meridian audio system will keep you entertained.