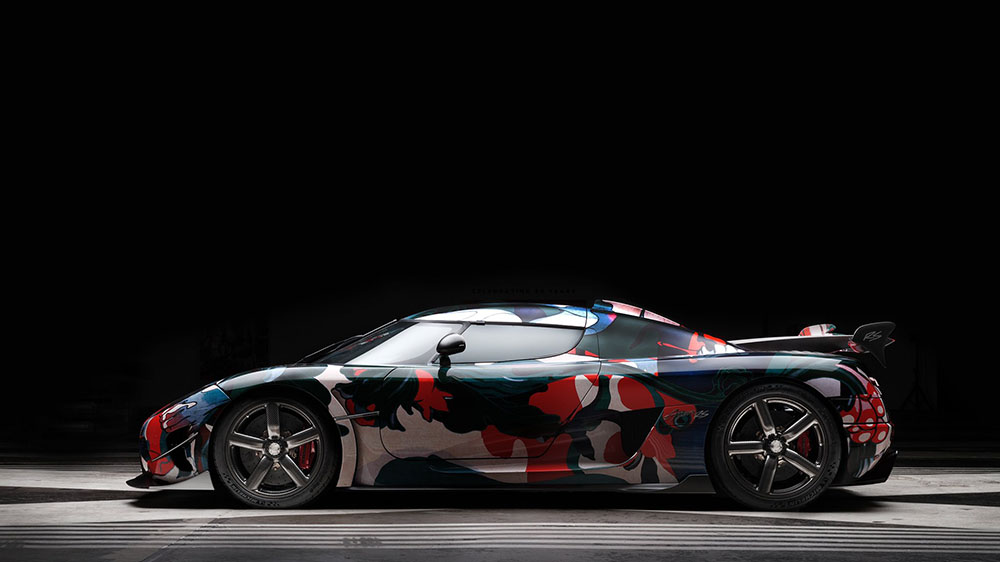 The American visual artist has taken his lush print Pomegranate and applied it to the body of the Swedish hypercar, turning what was already a technological marvel into a work of art. But the striking finish isn’t the vehicle’s only noteworthy trait—this Koenigsegg is also the world’s fastest art car.

Pomegranate, which depicts a woman using the juice of the fruit as makeup, was first created as a wood block print while Jean was working at the Adachi Institute in Tokyo in 2016, according to Arrested Motion. The surreal image’s rich colors and intricate linework are striking but don’t necessarily seem like a natural fit for the body of a car, especially one as curvaceous as the Agera RS. Luckily, the artist was able to call upon vinyl wrap specialists Wrap Legends to help adapt the image so that it could fit all the vehicle’s contours. And based on the images of the car, the collaboration has turned out to be quite fruitful.

Jean’s artwork may have made this Agera RS a one-of-a-kind vehicle, but it was already pretty special car. Koenigsegg produced just 25 examples between 2015 and 2018, each of which were equipped with a 5.0-liter twin-turbocharged V-8 capable of generating 1,160 hp. Thanks to its brawny powerhouse, this particular example, nicknamed “Ruthie,” was able to reach a two-way, top-speed average of 277.9 mph in November 2017, making it the world’s fastest production vehicle.

The Agera RS would hold onto its record for more than three years, until it was finally bested by an SSC Tuatara this past January. As with camera cars, there are no official speed records for art cars, but since the Tuatara has yet to be turned into one we feel pretty confident saying the title belongs to “Ruthie.”

Jean lent his artistic touch to the Agera RS to help celebrate the 20th anniversary of the Festival of Children Foundation in Southern California. If you’d like to check out the world’s fastest art car for yourself, it’ll be on display at Ghost Squadron at South Coast Plaza in Costa Mesa for the rest of the month.