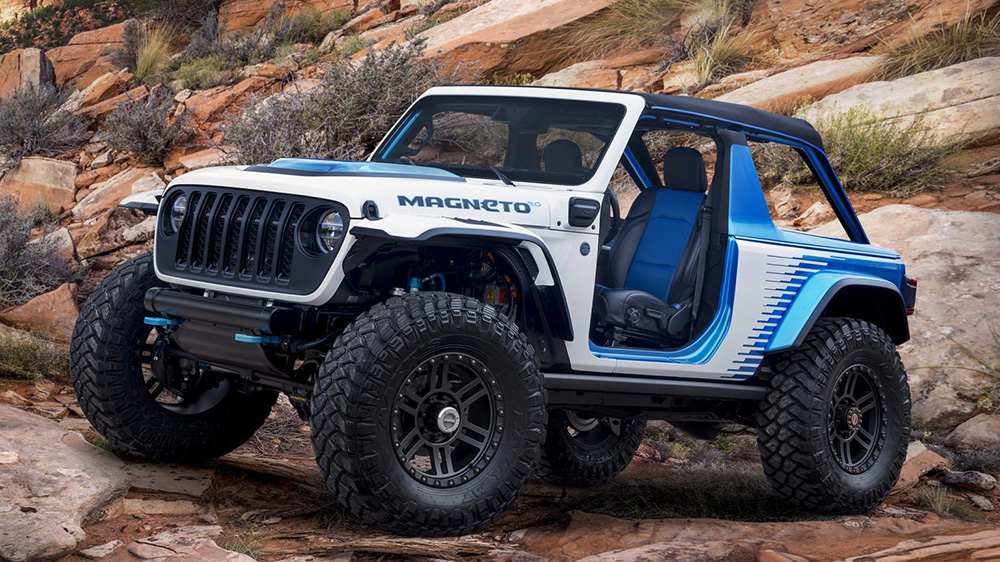 The 4×4 specialists have just unveiled a heavily upgraded version of its battery-powered Wrangler Magneto concept in the lead up to the 56th annual Moab Jeep Easter Safari. The SUV prototype doesn’t look radically different from its predecessor but does something it couldn’t even come close to accomplishing—rocket from zero to 60 mph in just two seconds.

Just like the prototype unveiled before last year’s event, which was Jeep’s first all-electric concept, the Magneto 2.0 features an all-electric drivetrain powered by an 800-volt battery pack. But unlike the first iteration, which had an electric motor as muscular as the Wrangler’s V-6, meaning it produced 285 hp and 274 ft lbs of torque, the new version has a custom axial flux electric motor that can generate 625 horses and 850 ft lbs of twist.

The new mill is connected to a six-speed manual transmission that sends power to all four wheels and has been designed to hold peak amperage for up to 10 seconds—something that brand says is basically like “electronic nitrous oxide”—a feature that allows it to go from a standstill to 60 mph in only two seconds. It took the first Magneto 6.8 seconds to do the same. Jeep didn’t say anything about its range, but that’s certainly an impressive performance mark.

Output isn’t the only difference between versions 1.0 and 2.0 of the Magneto. The new version’s chassis has been extended by 12 inches to make room for the new powertrain and is equipped with Pro-Rock Dynatrac 60 front axle, a Dynatrac 80 rear axle, custom driveshaft and an off-road suspension. It also has an all-new carbon-fiber B-pillar, bikini top, three-inch lift kit and rides on a set of 20-inch wheels wrapped in 40-inch knobby off-road tires. Finally, its two-door body is finished in a unique Surf Blue and white livery.

While the Magneto 2.0 certainly looks production ready it won’t be the first Jeep EV to roll off the assembly line. Last month, the brand shared images of an as-yet-unnamed battery-powered SUV that it plans to put into production next year. Details are close to non-existent at this point but it looks like it will be based on the Compass crossover. An all-electric Wrangler is expected to follow in 2024.

Here’s hoping it’s more like the Magneto 2.0 than not.