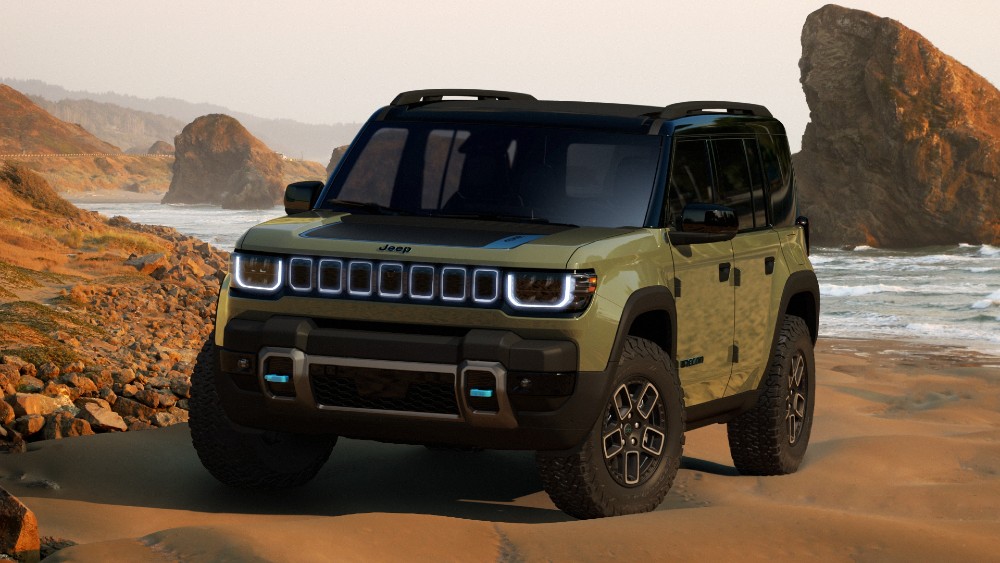 Jeep is ready to go fully electric—and it has the battery-powered 4x4s to prove it.

The automaker unveiled its first two EVs for the US market, the Recon and Wagoneer S, on Thursday. The vehicles, which are expected to launch in 2024, represent the first phase of the brand’s plan to fully electrify its entire global lineup.

We knew this was coming. Jeep began taking steps to electrify its lineup earlier this decade. In 2020, it debuted the Wrangler 4xe, a plug-in hybrid version of its most iconic model. Then in 2021, it introduced a 4xe build of the Grand Cherokee, another of its most famous nameplates. But those were relative baby steps compared to what some other automakers have done. In March 2022, Jeep teased its first all-electric model. Strangely, that EV, which didn’t have a name at its unveiling, doesn’t appear to be destined for our shores.

The Recon will have removable doors and glass  Jeep

The Recon is, though. The mid-size SUV has a robust and boxy shape that’s not entirely dissimilar from the Wrangler. That’s not the only thing it has in common with the iconic 4×4. It also has removable doors and glass, as well as a rear-mounted wheel. We don’t know what kind of powertrain it will have—though multiple motors seem likely, in order to give it four-wheel drive—but the automaker has teased a retractable roof, electronic locking differentials and underbody protection.

The Wagoneer S is also a mid-size SUV, unlike the gas-powered Wagoneer and Grand Wagoneer it shares a name with. Its size is closer to that of the Cherokee, but it looks like a sleeker version of its larger, emission-generating siblings. We were particularly struck by its LED-lit grille and a slick spoiler coming off the sloping roof. Again, Jeep wouldn’t go into too much detail about its powertrain, but said it was targeting 600 hp, a 3.5-second 0-to-60 mph time and a range of 400 miles per charge for the vehicle.

The automaker showed off another EV on Thursday called the Avenger, but that one isn’t coming to the US as of right now. It’s actually the vehicle that was teased back in March, and will launch in Europe early next year, making it the company’s official first EV. It looks similar to the Compass, the brand’s compact crossover, but is smaller than the subcompact Renegade.

The Recon and Wagoneer S are pillars of Jeep’s plan to offer electrified options—meaning hybrids and all-electric models—across its entire lineup by 2025. The two battery-powered 4x4s and the Avenger are three of the four EVs the brand plans to launch by the middle of the decade. We don’t know what the fourth will be, but a fully electric Wrangler would certainly be nice (and something the automaker has clearly thought about). Jeep has yet to commit to a date at which it will stop selling cars with internal combustion engines, but it has said it plans to only sell EVs in Europe by the time 2030 rolls around.

Click here to see all the photos of Jeep’s new battery-powered SUVs.