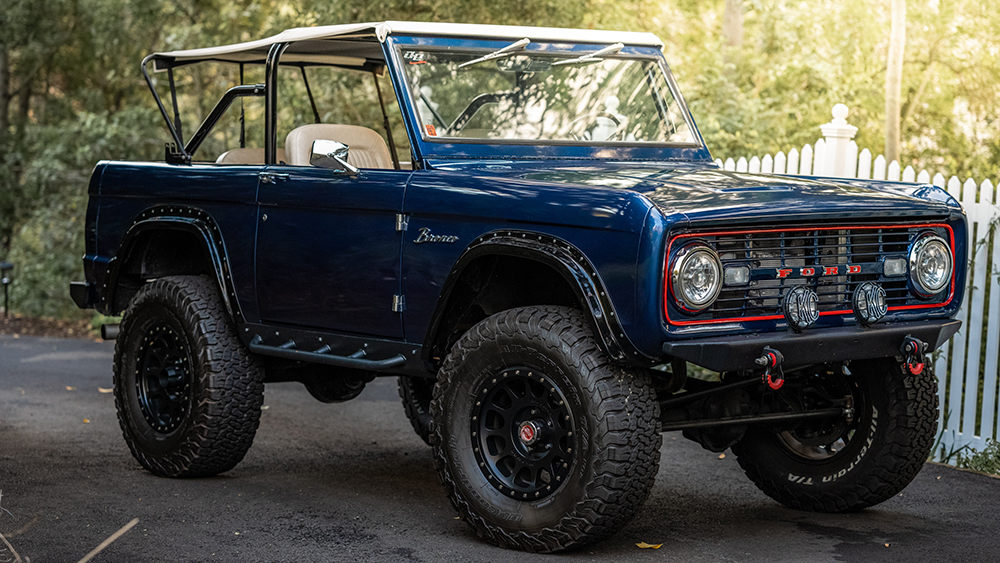 After auctioning off a rare Porsche 911 last year, Jenson Button is now parting with his 1970 Ford Bronco.

The British racer, best known for winning the Formula 1 World Championship in 2009, has just listed a meticulously restored first-generation Bronco via the Collecting Cars auction platform.

The classic 4×4 has been treated to an array of mechanical and cosmetic upgrades to make it even more rugged than before. Button himself partially restored the truck and put about $20,000 into it, according to the auction house.

Finished in a handsome dark blue, the custom ride features red accents around the front grill that carry over to the Ford badge and towing hooks. The side top windows have been removed while a set of KC driving lamps have been installed beside the updated headlights. Elsewhere, the SUV sports black 17-inch Method alloy wheels wrapped in chunky 35-inch BFGoodrich all-terrain tires, along with black wheel arch extensions and side protection runners.

Under the hood, the retro ride is equipped with a naturally aspirated 4.9-liter small-block Bronco V-8 mated to a three-speed automatic transmission. The auction house estimates it can produce north of 300 hp. By comparison, the 1970 Bronco packed a 2.8-liter V-8 good for 220 horses.

The mill has been upgraded with Fitech fuel injection and an Edelbrock filter as well as an MSD ignition kit with a push-button start. The suspension has also been raised and is now fitted with Bilstein shock absorbers. Stopping power, meanwhile, comes courtesy of new Wilwood front disc brakes.

The restored Bronco can churn out more than 300 hp.  Collecting Cars

Inside, the cabin is finished in fresh cream leather comes fitted with period-correct seats, along with a half roll cage over the rear bench. Other interior add-ons include a Bimini soft top, a wood-rimmed steering wheel and a Kenwood stereo. To top it off, there’s a Borgeson power steering rack and a new polished steering column to improve handling.

The best part? The eye-catching truck has been in Button’s ownership for the past four years and has just 170 miles on the dial. At the time of this writing, the Bronco has already attracted two bids and is sitting at $30,000. The auction will wrap on January 20, which gives you six days to get your bid in.