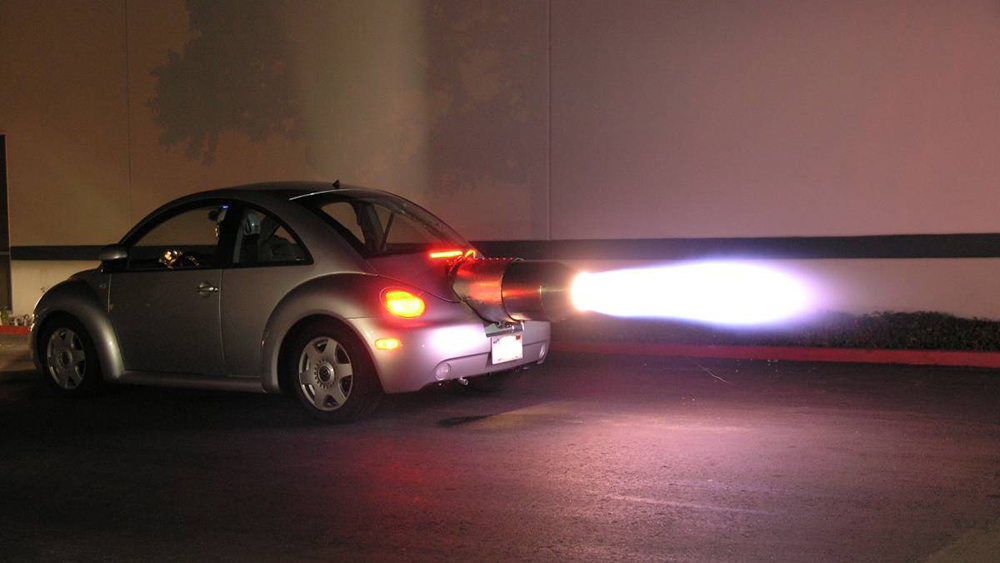 Just when you think you’ve had your fill of bonkers automobiles, Craigslist is here to replenish your cup. An insane jet-powered Volkswagen Beetle just popped up for sale on the classifieds site for a hefty half a mil.

The pocket rocket is the handiwork of Ron Patrick, who has a Ph.D. in mechanical engineering from Stanford. He created the four-wheeler, nicknamed Jet Beetle, a decade ago because he wanted “the wildest street-legal ride possible.” Yes, you read that right, this thing is street-legal.

The pièce de résistance is the giant General Electric T58-8F engine. This is actually a helicopter turboshaft motor that was converted into a jet engine thanks to some internal modifications and a custom tailpipe. The 300-pound beast now spins up to 26,000 RPM and can produce a gutsy 1,350 horses along with billowing flames for dramatic effect.

A close-up of the General Electric T58-8F engine.  Ron Patrick

Integrating the hefty engine into the pint-sized vehicle was no easy feat, especially since the two are nearly the same length. Patrick began by cutting a hole in the back of the beetle with a homemade jig and a pneumatic saw. He then built a special structure to hold the engine. The force from the jet is tied to the vehicle through sandwich plates inside the car bolted to contoured aluminum billets that were slid into the frame rails.

To be sure, there’s a lot of complex engineering going on in the back, and the tinkerer claims that “the attention to detail in this car borders on obsessive.” Unconvinced? Just check out the blow-by-blow on his website.

So, how does she actually run? The VW has the standard gas engine under the hood for daily driving and the jet engine for when you want to have some fun. It can be started on command while driving to give you a neck-snapping boost. Patrick has wisely never punched the car full throttle and doesn’t know it will go full pelt.

“The car was built to thrill me, not kill me,” he writes. “That doesn’t stop me from the occasional blast on the highway though.”

As for what inspired the engineer, it was a combination of sheer desire and ability.

“It just seemed like an obvious thing to do at the time,” he told Robb Report. “Who wouldn’t want a jet-powered VW?  Hell, life’s short, if you have the time, skill, and money to do something—do it!”

The bad-ass beetle is currently street registered and could be yours for $550,000 if you dare. Hey, the built-in, flame-throwing tailgating deterrer alone might be worth the price.