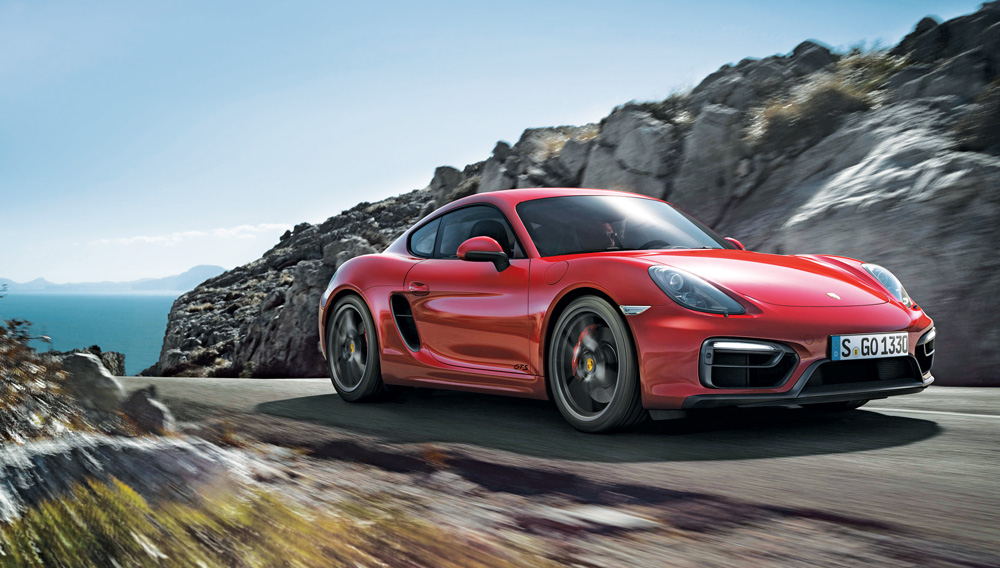 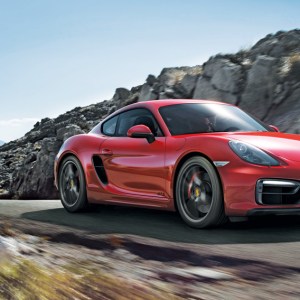 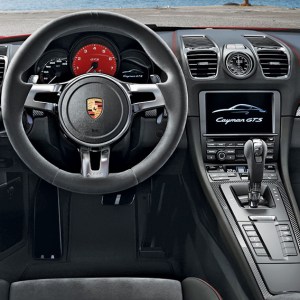 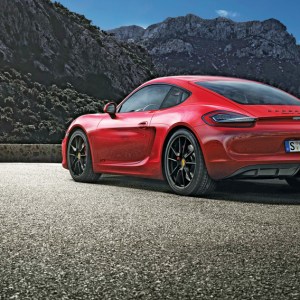 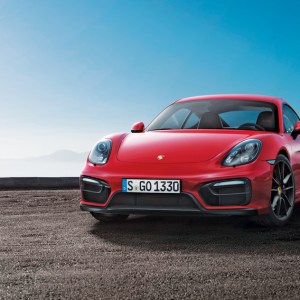 The Porsche Cayman GTS puts a new spin on fun.

The letters GTS and the six-figure price—when extravagantly optioned—are two hints that this Porsche Cayman variant is a serious sports car. While the Cayman GT4, which Porsche begins delivering in July, has track fans swinging from the rafters, the GTS is a more versatile machine that features numerous upgrades from the base Cayman. Foremost among these is an engine output that has been pushed from 275 to 340 hp. The GTS is visually distinguished from the base model by a front fascia with larger air intakes, a slightly lower ride height, and stylish 10-spoke, 20-inch wheels.

The Cayman (and its variants) has a cultlike following among Porschephiles, who appreciate its smaller size and price compared to those of the venerable rear-engine 911. Owners extol the mid-engine model’s agile handling and more balanced weight distribution, which make the Cayman a perfect weekend track toy. Generous front and rear luggage compartments also make it well suited to weekend getaways, as a GTS test car demonstrated on a recent jaunt down the California coast to Del Mar.

Driving the GTS along back roads in and around Del Mar showed its raison d’être: fun. The standard 6-speed manual transmission (the excellent 7-speed PDK is optional), with its soul-stirring rev matching and slick short-throw shifting, could make any driver feel like a racing pro. And in a world where it seems as though everything operates automatically, calling one’s own shots—which are amplified by a corresponding exhaust symphony—is a rare and satisfying treat.

Porsches have never been torque monsters, and this car’s 280 ft lbs from a 3.4-liter flat 6 may seem underwhelming. But the Cayman GTS can scoot from zero to 60 mph in 4.6 seconds (4.5 when equipped with the PDK transmission and 4.3 seconds when it is in the Sport Plus mode) and reach a top speed of 177 mph (175 mph with the PDK). Notwithstanding these performance specs and track capabilities, the car is best enjoyed on public roads at legal speeds.

Porsche Active Suspension Management regulates damping force based on road con­ditions, and the optional Porsche Torque Vectoring applies judicious braking to the inside rear wheel when the car enters corners. The locking rear differential gains traction as the Cayman GTS exits the corner and aids in braking stability. The Sport Chrono Package is standard, and in addition to including a feature that records lap times, it provides sportier calibration for the engine, suspension, and gearbox.

When drivers slow the car’s pace, they will find ample details to appreciate in the cabin, including excellent seats and jewellike controls. The tasteful mix of materials blends leather, plastic, metal, and lots of Alcantara. The GTS that Porsche provided for the ride to Del Mar was fitted with the optional Burmester High-End Surround Sound System. It may be overkill to include this system in a car of this size, but when a rousing Bach cantata is played, it transforms the cabin into a miniature of Leipzig’s Thomaskirche.

The GTS’s base price is just over $75,000 (about $79,000 with the PDK transmission), but the cost spools up faster than the engine shoots to redline when options are added. Still, the value delivered by the GTS—from its performance to its build quality to its user-friendly character—makes it a must-drive. Other models may be quicker, more exotic, and costlier, but none delivers more of that elusive quality called fun.