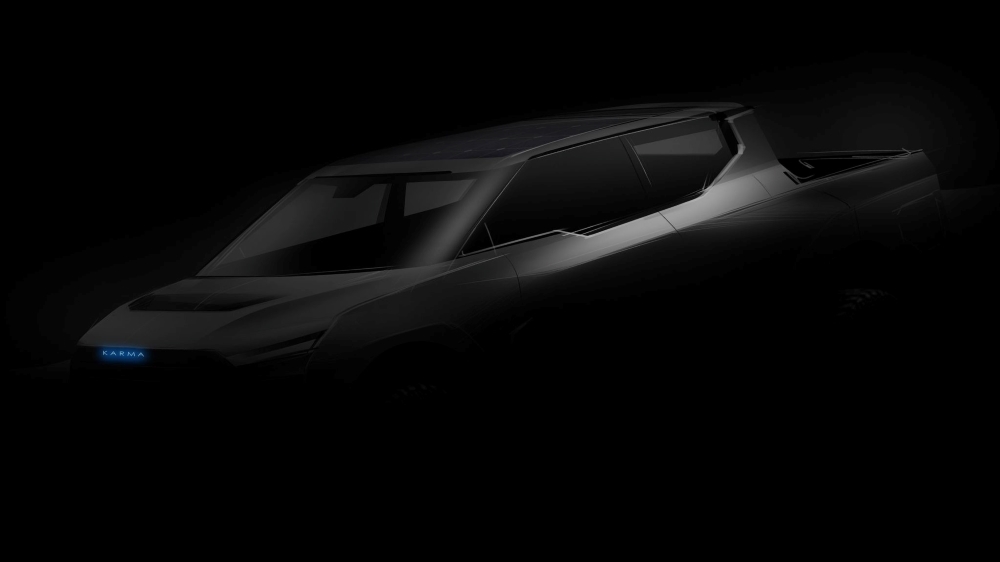 Karma Automotive is striking while the lithium-ion battery is hot. Following the success of its luxurious Revero sedan, the marque has announced that it will unveil an electric pickup and high-end SUV before the year is out.

The automaker, previously known as Fisker Automotive, plans to base both the truck and SUV off a new all-wheel-drive platform that will soon go into production at its factory in Southern California, Bloomberg reported. Details are limited, but judging from the teaser image the pickup boasts a body with angular lines and a matte black paint job. There is also a neon “Karma” logo on the bonnet which looks very Tron. There are no images yet of the touted SUV.

Chief operations officer Kevin Pavlov told Bloomberg that the new truck will cost less than its hybrid sedan sibling, the Revero, which starts at $135,000. This competitive price point will put the pickup in direct competition with the highly anticipated Tesla Cybertruck and Rivan’s RIT amid the ever-expanding sea of electric vehicles. But Pavlov, who previously headed up the e-car unit at Magna International Inc., is confident Karma’s creation will stand out against the competition.

“We can bring a utility vehicle into the market and be differentiated,” he said

Since its original company Fisker went bankrupt in 2013, Karma has been through a phoenix-like rebirth, thanks to an infusion of cash from Chinese investors and the subsequent success of the Revero. Last year, the marque sold about 1,000 units of the luxury sedan and has received a spate of awards and praise from the auto industry. (Separately, Henry Fisker, who is not affiliated with Karma, recently rolled out  a surf-themed electric SUV of his own.)

Hopefully, the new pickup and SUV follow in the Revero’s green footprints. But if not, Karma has a backup plan. Pavlov said the marque also plans to try licensing its electric and self-driving technology to other automakers, which may offer some measure of stability as it takes on a luxury vehicle sector that’s undergoing seismic changes.