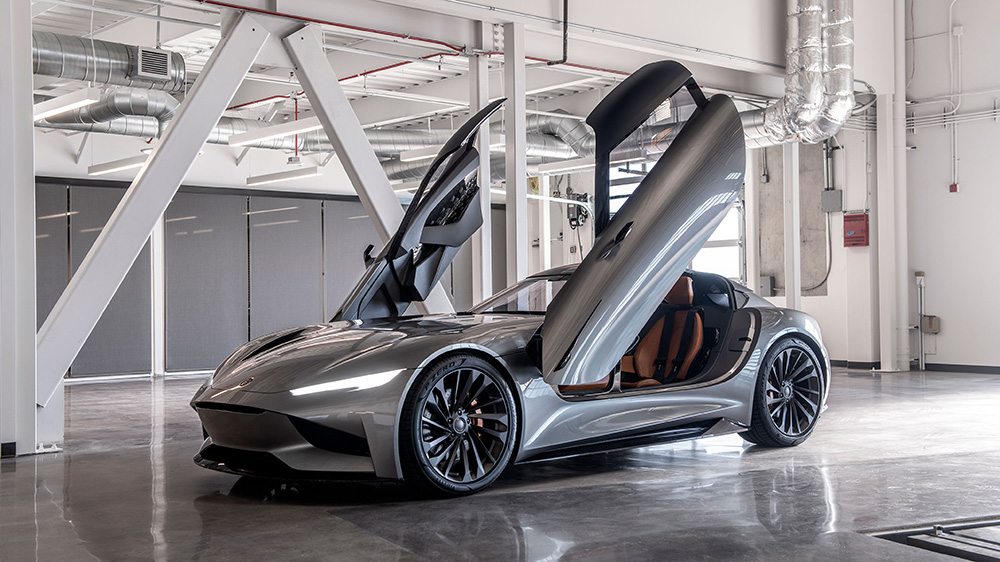 Here’s the thing about concept cars: most don’t make it to production. Sure, features from a prototype may eventually make their way to the company’s future offerings, but the car you’re oohing and ahhing over is most likely a one-off. Still, that couldn’t stop us from admiring the stunning new Karma SC2 Vision Concept.

Unveiled at the v earlier this week, the Southern California-based automaker’s latest concept care is a retro-futuristic roadster with specs to match its striking stylings. But as the company makes very clear in a press release, the SC2 is a way of showing off what it believes the company is capable of going forward.

“Karma’s SC2 is a signpost to our future as a technology-driven brand. More than that, it previews our future design language, and is a thought-provoking expression of Karma’s future Intellectual Property and product offerings,” said company CEO Dr. Lance Zhou. “Our open platform serves as a test bed for new technologies and partnerships, where we are to provide engineering, design, technology and customization resources others.”

The SC2’s design really is something else. Finished in Vapor Grey, the car’s elongated front gives it the look of a rocket ship on wheels. Most striking of all are its giant scissor doors, which make the vehicle look like a sports car from decades in the future. The concept also features a removable hard-top that you can put up on those days you don’t feel like messing up your hair.

Maybe even more exciting than the car’s bold design is the powertrain that drives it. The SC2 features front- and rear-mounted twin electric motors that combine to produce a stunning 1,100 hp and 10,500 lb-ft of torque per wheel. This ultra-powerful setup will allow the car to zoom from 0-to-60 mph in a blink-and-you’ll-miss-it 1.9 seconds. It will also have a very impressive range of 350 miles. Other features include carbon ceramic brakes, a push-rod operated racing suspension and a Karma torque vectoring gearbox.

Inside, the SC2 will also feature what the company is calling its “Drive and Play” technology, which will allow drivers to virtually relive previous drives. The car uses a triple high-definition cameras and frequency-modulated continuous wave lidar sensors to faithfully recreate 360-degree replays of your previous drives down to your exact inputs, the music playing and the temperature.

Of course, it unlikely that the SC2 will ever hit the road, and Karma isn’t pretending otherwise. But don’t be surprised to see at least some of the car’s features make their way to market in the future. The company would be more than happy to license their tech at the right price. With specs like this, we suspect they will.