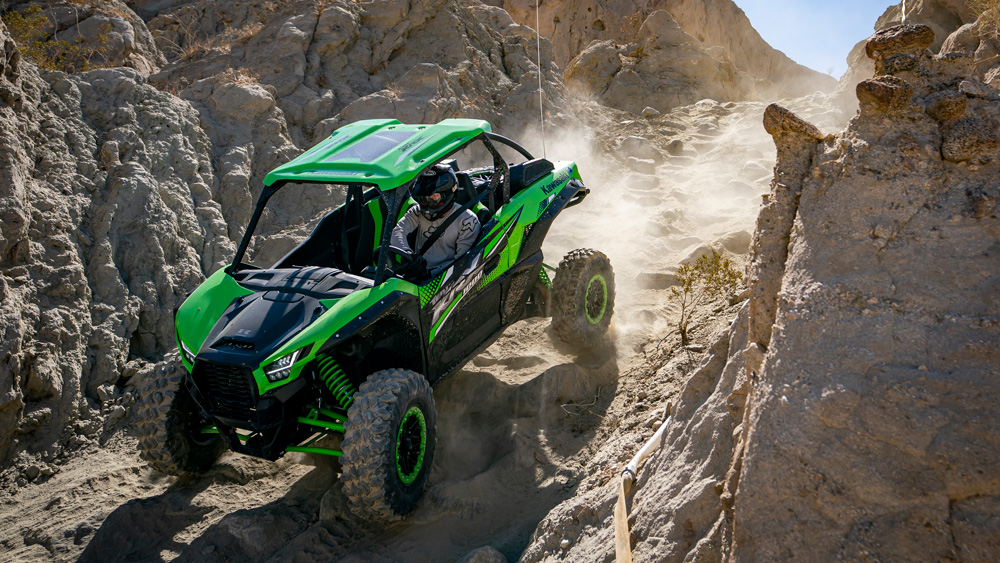 Off-roading is all about compromise, a process that segment stalwarts like Can-Am and Polaris know all too well. The tougher you build a UTV, strengthening its components by adding reinforcement, the heavier it tends to get. And in the entry-level 1,000 cc UTV class, where horsepower figures only range from just above 100 hp to 150 hp, every pound counts. Up until now, the major school of thought has leaned in favor of speed and agility, but with the release of the Kawasaki Teryx KRX 1000, it looks like the new kid is skipping that class and going against the grain.

If you think Honda took its sweet time getting into the sport UTV segment, then Kawasaki downright dragged its feet by comparison. The sportier side of side-by-sides is a segment witnessing constant growth, and to see a giant like Kawasaki delay its entry (while Polaris and Can-Am figure out how to dominate it) raises a few eyebrows. However, like Honda, Kawasaki was biding its time researching, developing and refining the Teryx KRX into a machine worthy of the family name. But did it pay off?

As the last major player to step into the ring, Kawasaki needed something special to stand out. At first glance, however, the Kawasaki looked lackluster. Chief among the worrying stats is the curb weight, which is a cringe-inducing 1,896 pounds—400 pounds heavier than its closest competitor from Honda. Considering that kind of heft, and only a claimed 112 hp from a 999 cc parallel-twin engine, I at first wondered why Kawasaki even bothered at all. It’s not until I got out on the trails and put the Teryx KRX through its paces that the method to Kawasaki’s madness revealed itself.

All that extra weight? It’s not careless overengineering. Kawasaki set out to make the KRX bombproof and did so by making traditional weak points beefier and noticeably more robust than the competition.

Full-length steel skid plates, a steel driver’s side wheel well, plus metal sleeves for the rear suspension, thicker A-arms and massive trailing arms are just some of the more visible components Kawasaki bolted on to extend the life of the KRX. The choice of stock wheels and stock tires weren’t taken lightly either, seeing as how the KRX gets 15-inch beadlock rims wrapped in 30-inch Maxxis Carnivore tires. But how does that extra steel reinforcement affect the KRX once you get moving? Not in the way you’d expect.

Kawasaki didn’t build the quickest UTV but they did tune the torque curve to come on lower in the rev range in order to curb some of the extra weight the KRX carries around. And the brand didn’t fit the KRX with bigger brakes (which would’ve added even more weight), It tuned the brakes and engine braking system to be more dynamic. At high speeds, the engine braking management system hardly intrudes, mitigating any choppy throttle inputs, but the slower you get, the more aggressive it gets. And, at the same time, brake bias shifts towards the rear, affording more stability.

The Teryx KRX tears over a rock garden.  Photo by Ryne Swanberg/Octopi Media, courtesy of Kawasaki.

Just outside of Palm Springs, Calif., the manufacturer set up a course feature a wide array of different natural features to flog the KRX. And bombing down the long straightaway, coming to a sharp left-hander followed by a tighter uphill right turn into a rock garden was all that I needed to experience the best and worst of this vehicle.

Hopping on the brakes, assisted by the aggressively tuned engine braking system after a full-speed sprint, brought the KRX down to almost a standstill quicker than anything that weight would be expected to. I got the feeling that there would be no chance of making any turn unless the Kawasaki didn’t utilize the engine braking as much as it does, but either way, the stopping power is beyond belief.

Then, just when the brute started to impress, I made my way around the left-hander, feeding the throttle in fairly aggressively, and the front end pushed wide. In medium-speed corners, the KRX would consistently understeer on exit. Locking the front differential in 4WD seemed to mitigate the issue, but a washy front end is rarely a problem with other UTVs, especially on the throttle, on corner exit.

The 1,896-pound off-roader has 112 horses ready to run.  Photo by Ryne Swanberg/Octopi Media, courtesy of Kawasaki.

Once the KRX was pointed up the next right-hander, however, and tractoring through the rock garden, it was in its element. With the front differential locked, and armed with those massive Maxxis Carnivore tires, the KRX crawled through effortlessly and felt bombproof. Whether I was hammering it over whoops, sliding through gravel, or inching down a boulder field with a 45-degree incline, I didn’t feel the KRX get pushed around by the terrain. It may be the heaviest UTV in its class, but that weight brings structural confidence.

The last of the big players expected to join this battle, Kawasaki waited to learn the weaknesses of the opposition, then brought a straight-up tank to the fight.