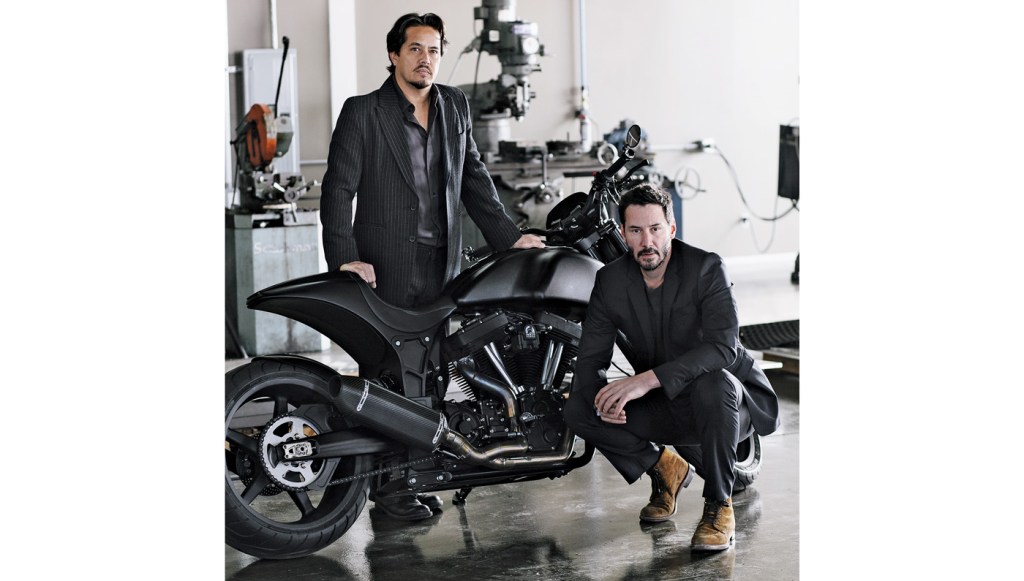 Arch Motorcycle Company’s Gard Hollinger and Keanu Reeves talk about the passion that goes into producing the swift and sleek KRGT-1.

The sprawling warehouse in Greater Los Angeles that houses the Arch Motorcycle Company could be mistaken for one of the city’s hip contemporary-art galleries. Behind the factory’s frosted-glass doors are polished concrete floors and white walls hung with large canvases.

It’s an inspired setting for the two-wheeled, purely kinetic modern sculpture that is created and displayed here, commanding the attention of anyone with a passion for speed and design.

The company was established in 2011 by custom-motorcycle builder Gard Hollinger and hard-core rider and actor Keanu Reeves. “Our partnership was forged around the first bike that Gard made with me,” says Reeves, referring to the custom build that Hollinger began creating with him in 2007 and delivered 4 years later. “Over that course of time, we really got to know each other, know each other’s taste and sense of humor. Going from that prototype and making the decision to start a company, there was a shared vision and a dream to build this unique custom production motorcycle.”

The $78,000 Arch KRGT-1 is essentially the production version of Reeves’s custom bike, but each example can be personalized with a unique finish and a variety of ergonomic options. “It’s a production bike, but it’s your bike,” says Reeves. “No one else is going to have your bike.”

Reeves put thousands of miles into developing and refining the KRGT-1, often riding it for 8 hours or more in a day to ensure that it’s suited to serious riders like himself. (“I ride a bike every day,” he says. “I mean, it’s my preferred mode of transportation.”) The bike, which weighs 538 pounds, is blisteringly quick, and it has boundless torque, superior handling dynamics, and ergonomics that have been perfected for riding mile after mile.

The KRGT-1 features an engine based on the one that has powered Harley-Davidsons for decades. It’s an enormous 124 cu in (2,032 cc) fuel-injected twin-cam that is built by S&S Cycle and engineered by Arch to incorporate a special downdraft air-intake system. The bike is also equipped with a 6-speed transmission with a proprietary high-torque main shaft. The left-hand primary drive uses a proprietary belt with a compact clutch basket capable of transferring all 150 ft lbs of torque, while the right-side final drive is by chain.

What makes the KRGT-1 special among big-twin customs is its great handling. Fundamental to that attribute is a central-frame backbone that is literally arched. The frame is made of tube and billet steel and incorporates aluminum structural members to form a chassis that is rigid, well balanced, and optimized to exploit the sophisticated front and rear suspension, which the gurus at Sweden’s Öhlins developed specially for Arch. “The fact that some companies have been willing to make unique parts for us, even though they know it’s not going to be a volume entry, has been really nice,” says Hollinger. “It shows their belief in the project.”

To the right of the company’s main showroom is an expansive space that houses the R&D department and a series of CNC machining stations where more than 200 parts for the KRGT-1 are fabricated. Each part is unique to Arch, including the gas tank. It begins as 534 pounds of raw billet aluminum, and through 66 hours of computer-controlled machining it is whittled down to a pair of 9-pound fuel cells, which are fitted and joined. The bike’s billet-aluminum swing arm requires 17 hours of machine work, and the result is pure art.

When asked about the aesthetic and engineering decisions he and Reeves made during the bike’s development, Hollinger says, “Some of them were driven by design, some are driven by necessity, and some of them are driven by the desire to do something different at a higher level than what is the standard. One of the things that we are really proud of is that we do things sort of obsessively. We don’t necessarily take the easiest path. The fit and finish and the things you discover on our motorcycle the more time you spend with it, I think, are unequaled.”

These nuances, he suggests, are like a secret handshake between the bike’s owner and the builder, an unbreakable bond of sorts. “Every time we add an owner,” says Hollinger, “we’re adding a family member, a member of the tribe.”