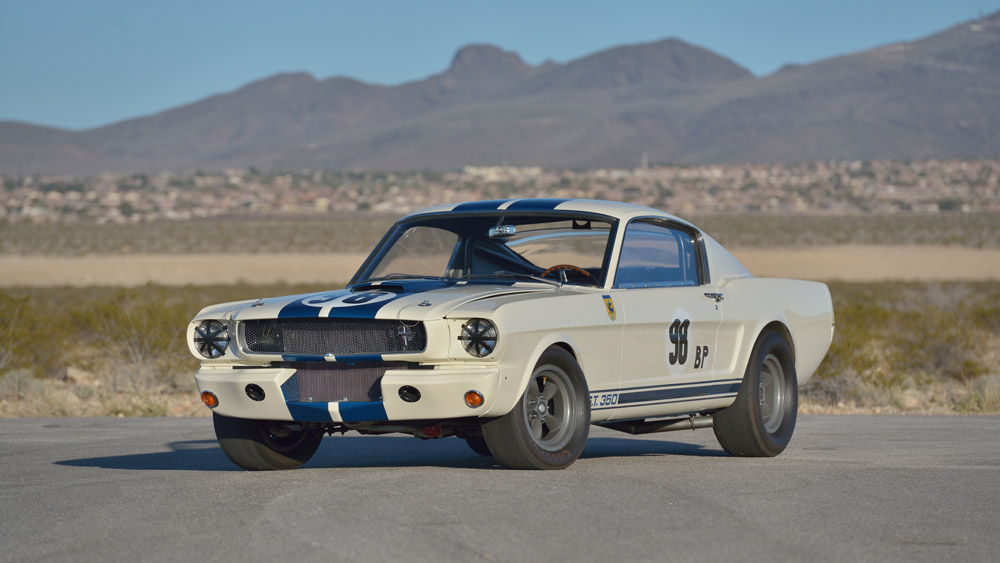 Car enthusiasts who are familiar with any of the Mecum Auctions events know that the rarest and most significant vehicles often roll across the block in the final day of the sale. Because of that, it’s likely that many people were not paying attention to the start of the company’s three-day event in Glendale, Ariz., yesterday. However, those who were, caught a glimpse of Ken Miles’ Shelby GT350R Prototype and were the first to learn that it will be consigned during Mecum’s upcoming auction in Indianapolis, to be held June 23 through 28.

The Shelby prototype is one of several vehicles that will be offered for sale from the private collection of John Atzbach, an automotive enthusiast who has spent decades acquiring the most exceptional pieces of Shelby-American automobilia in existence. Atzbach’s collection includes one of only two production, supercharged 1965 GT350s, the first production 1966 GT350 and the first 1966 GT350 Convertible, of which only four were made. Still, the 1965 GT350R Prototype is the collection’s crown jewel.

“This is one of the greatest main attractions that Mecum has ever offered,” said Dana Mecum when the car was revealed in Arizona. “Without this car, there is no Super Snake.” (Mecum Auctions sold the 1967 Shelby GT500 Super Snake for $2.2 million in 2019.) “Without this car,” Mecum added, “there is no ‘Bullitt.’” (The auction company sold the “Bullitt” Mustang earlier this year for $3.74 million.) “This is the only Mustang that Ken Miles ever drove,” he continued. “This is probably the winningest Mustang ever. This was the car that was built to make Mustang a performance car.”

As the first R-model ever built, this Shelby GT earned the nickname the “Flying Mustang” thanks to a photograph taken at the Green Valley Raceway on Feb. 14, 1965. The image captures the car completely airborne with Ken Miles behind the wheel. The race depicted in that black-and-white photo marked the first sanctioned competitive event for a Shelby Mustang. Impressively, it also marked the first racing victory for a Shelby Mustang, a victory that paved the way for success on a far grander stage.

This photo, showing Ken Miles behind the wheel, earned the car its nickname, “Flying Mustang.”  Photo: Courtesy of Mecum Auctions.

Ken Miles’ prototype subsequently served as a rolling test bed for engineering ideas and components, many of which contributed to the racing victories achieved by other Shelby GT350s thereafter. Simply put, this GT350R and its success at Green Valley Raceway served as the catalyst to Carroll Shelby’s illustrious career as a manufacturer of high-performance, racing machines.

Following Atzbach’s acquisition of the car in 2010, John Brown of Thoroughbred Restorations in Oklahoma City brought the vehicle—in its “as found” condition—through a complete restoration, returning the prodigious race car to its original configuration. Shortly thereafter, the vehicle earned a Best of Class award at the Amelia Island Concours d’Elegance in 2014, and it received a perfect score from National SAAC judges during the National Shelby Convention at Road America later that year. In 2015, this Shelby GT350R earned another Best of Class award—this time at the Pebble Beach Concours d’Elegance.

It’s not hyperbolic to say that this 1965 GT350R Prototype is the world’s most significant Shelby Mustang. As such, Mecum Auctions believes that it could outperform the sale of the “Bullitt” Mustang from its auction in Kissimmee, Fla., earlier this year. Said Mecum during the car’s unveiling in Arizona: “If there was ever a car that could surpass what the Bullitt car sold for, you’re looking at it now.”