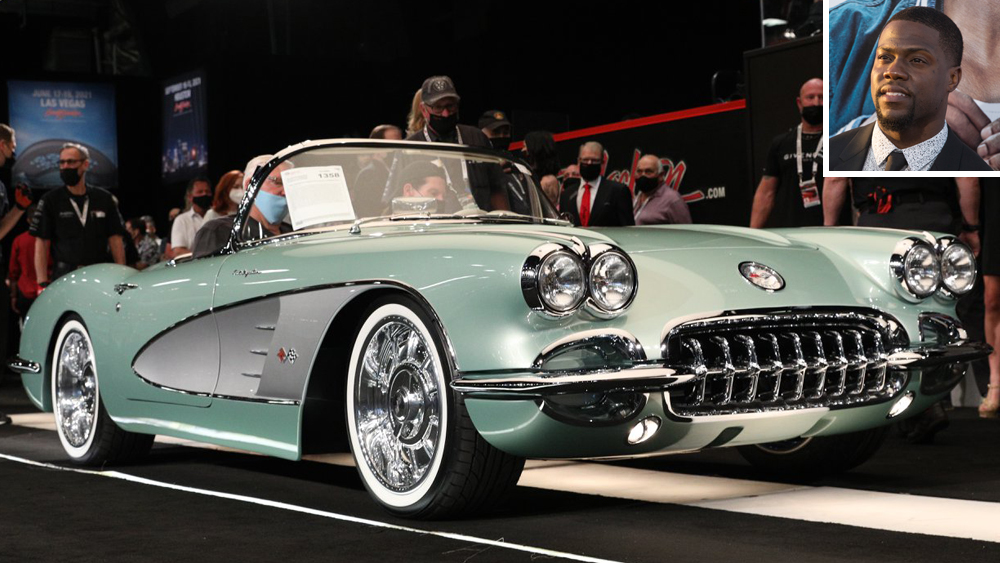 Kevin Hart’s collection of restomods continues to grow, and the latest entry may be the best yet.

Last weekend, the comedian bought a stunning 1959 Chevrolet Corvette convertible for $825,000 at Barret-Jackson’s Scottsdale sales event, according to a Facebook post from the auction house. Hart’s C1 is a true beauty, but what’s most impressive about it may be under the hood: its 6.2-liter V-8 is the same mill you’ll find in the mid-engine C8 Corvette LT1.

But any discussion of Hart’s new roadster has to begin with its exterior. This is quite simply one of the best looking first-generation ‘Vettes you’ll ever see. Dating back to the second half of that generation, it has the four exposed headlamps and the prominent grille and chrome detailing the car is known for. It has also been finished in a new coat of glossy PPG Fanny Green, according to the auction listing.

Inside, the cabin has also been refreshed with new leather and upholstery, as well as Dakota Digital gauges and a Bluetooth audio system designed to look just like the original’s Wonder Bar stereo. Completing the makeover is a Chocolate Brown convertible top made of Stayfast material and EVOD one-off wheels wrapped in Nitto whitewall tires.

Just as much attention was paid to elements you can’t see, like the restomod’s modern-day powertrain. Mated to a 4L75E automatic transmission, the C8 V-8 is capable of churning out 460 horsepower and 465 ft lbs of torque, which is twice as much power as the 1959 ‘Vette’s base-level mill. The roadster also rides on a fully adjustable Art Morrison C7 independent front suspension equipped with Strange coilolver shocks. Other modern-day modifications include a powder-coated frame, power rack and pinion steering, Willwood brakes and a GM wiring harness and factory-programmed computer.

This is the second classic restomod that Hart has purchased in as many months. In early February, Speedkore announced that it had just delivered a custom 1970 Dodge Hellraiser commissioned by the comedian. The menacing muscle car has an exposed carbon-fiber body and is powered by a 426 Hemi capable of delivering a jaw-dropping 1,000 horses and 950 ft lbs of twist.