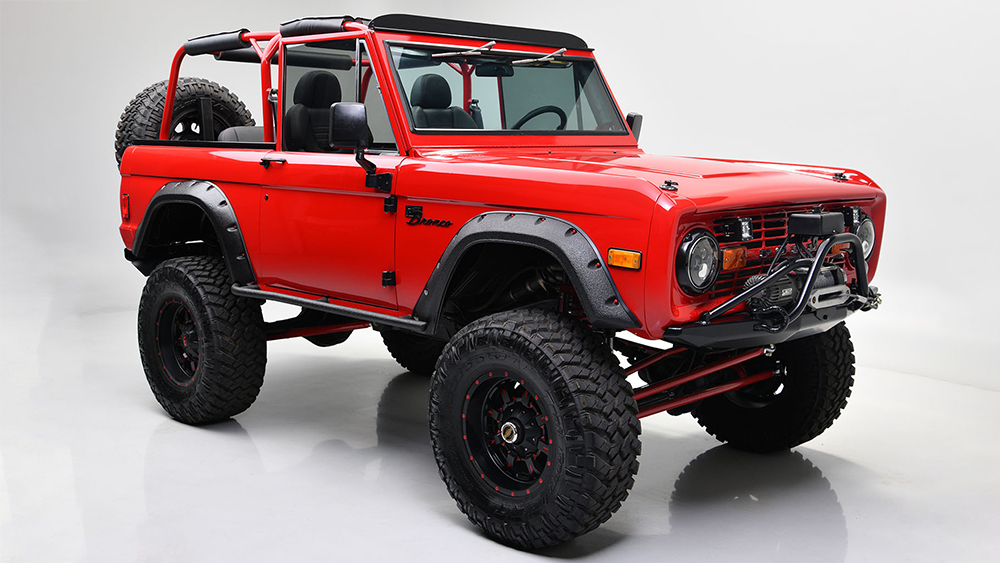 Kevin Hart’s impressive collection of American-made automobiles is about to shrink—and you may get to benefit.

Later this week, the popular comedian’s gorgeous 1977 Ford Bronco will be auctioned off as part of Barrett-Jackson’s Las Vegas sales event. And true to his collecting proclivities, this isn’t just some mere vintage 4×4. Instead, it’s a custom-made restomod with all the conveniences of a modern SUV.

Hart’s Bronco, which was featured on a 2019 episode of Jay Leno’s Garage, is a true beauty. The off-roader is done up in fire engine red and is free of any chrome accents (even the badging is blacked out). The SUV showcases black flared fenders, a custom bumper, 9,500lb WARN winch, LED light package and rides on a massive set of 35-inch Nitto Trail Grappler M/T tires. The interior, which is housed by a body-matching roll cage, is covered in black leather with red stitching and features a billet three-spoke steering wheel, LED speedometer, LED speedometer, reclining front bucket seats and JL audio speaker system. There’s also a removable black soft top for when you want to take it for a spin in the rain.

Under the hood, the Bronco brings plenty of grunt. It’s equipped with a brawny fuel-injected 302ci V-8 mill mated to a three-speed automatic transmission and Dana twin-stick transfer case. Other mechanical upgrades include a Crane electric ignition, an Ardent Performance custom exhaust featuring MagnaFlow mufflers and a custom aluminum radiator and a free-flowing K&N intake air filter to keep everything nice and cool. It’s also been outfitted with a new suspension package, which includes a lift kit and King coilover shocks with red springs, and has power disc brakes on each wheel. And with just 700 miles on the odometer, the build remains it superb condition.

Hart’s custom Bronco will go up for bid during Barret-Jackson’s 2021 Las Vegas Auction, which runs from Thursday, June 17 to Saturday, June 19. It’s being sold without reserve, but considering the owner, we expect the SUV to hammer down for more than the $57,000 it was valued at on Leno’s Garage.

Hey, maybe one day the comedian will decide to part with his gorgeous 1959 Chevrolet Corvette or his beastly 1970 Dodge Charger. One can only dream.