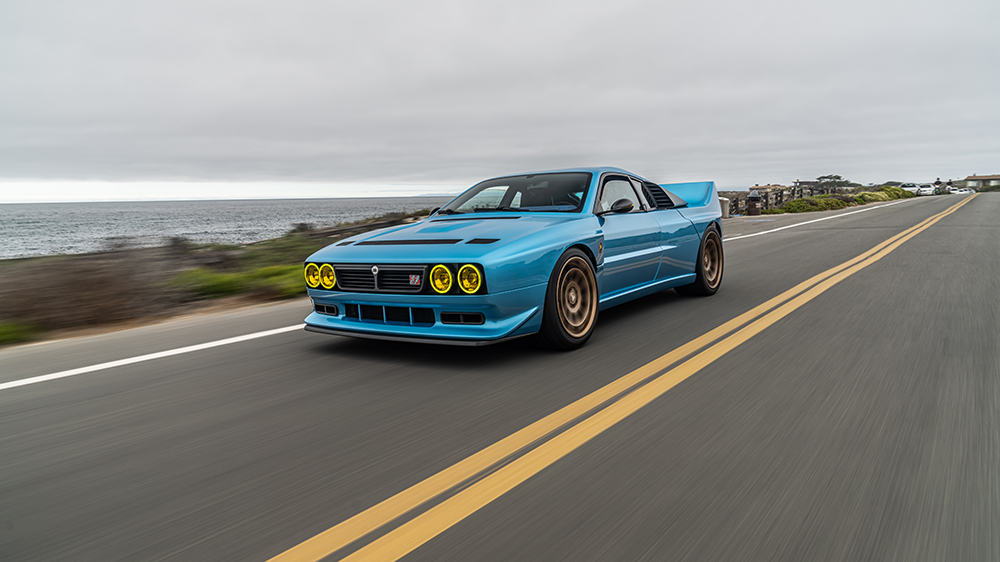 Lancia’s oddly named 037 blazed a disruptive trail through the 1980s, debuting as an FIA Group B racer whose homologated roadgoing versions were built alongside the fire-breathing competition machines. The Pininfarina-designed racer was an exuberant expression of style and engineering, packing a feisty four-cylinder engine that helped it snag a 1983 WRC Constructor’s Championship title at the hands of Walter Röhrl and Marrku Alén.

Four decades after the striking wedge’s service as a Group B rally racer, a fresh reinterpretation is breathing life into the boutique supercar world. Making its US debut at The Quail, A Motorsports Gathering following an early sneak peek at the Petersen Automotive Museum, Kimera Automobili’s EVO37 brings funky, angular-bodied energy to the high-dollar custom world.

Limited to a run of 37 cars—a fraction of the reported 207 roadgoing versions of the original—the revitalized ’80s icon is powered by a turbocharged and supercharged 2.1-liter four-cylinder engine, just like the first 037. This particular example was spec’d by Parris Mullins, Director of Motorsport and Special Projects at O’Gara Coach, the Southern California dealership network known for its high-end portfolio of carmakers.

Mullins shared details about his trip to Kimera headquarters just outside of Turin, Italy, with Robb Report, describing this example as a paragon of what can be achieved through extreme personalization. Mullins says he sees Kimera founder Luca Betti as a sort of “Italian Tony Stark,” whose remarkable glass showroom space includes hidden panels and a virtual simulator for car configuration. Choosing the color alone for the first US car involved an exhaustive process. Red had “already been done,” and Mullins’ success with a McLaren P1 finished in dark green was also verboten since the first EVO37, dubbed Esmerelda, was finished in the verdant tone, while silver was also taken. “Then I remembered a Lamborghini color I loved, which goes from silvery blue to vibrant baby or electric blue with lots of metal flake,” recalls Mullins, who had a color sample shipped from Los Angeles to Italy. He went on to trim the interior in blue as well, with a bronze accent theme running throughout. The plushness of the upholstery is balanced by delicate functionality of the buttons and switchgear, which stands out thanks to orange accents. Dubbed “Edda” after Ennio Morricone’s soprano Edda Dell’Orso, Mullins chose the moniker as a hat tip to founder Tom O’Gara’s love of music, specifically that of the Italian composer.

The EVO37 reportedly produces around 520 hp, which should go a long way towards pushing its sub-2,500 lb weight through time and space. The obligatory list of top-shelf components from Öhlins and Brembo rounds out a mechanical package that ought to make the Kimera a fearsome driver in a similar vein to the uncorked rally racers from which it was inspired. Because the EVO37 is based on a fully federalized Lancia Scorpion chassis that was shipped to Italy for the build, it is fully registered and street legal in the United States. Starting at $650,000 (and loaded with approximately $100,000 of extras), this particular Kimera is one of only approximately five EVO37s that will make their way stateside. Expect to hear the usual complaints about the price now, followed by nostalgia about how they were “only” $650,000 when these rare birds are no longer available.

Click here to see all of the photos of the Kimera EVO37.