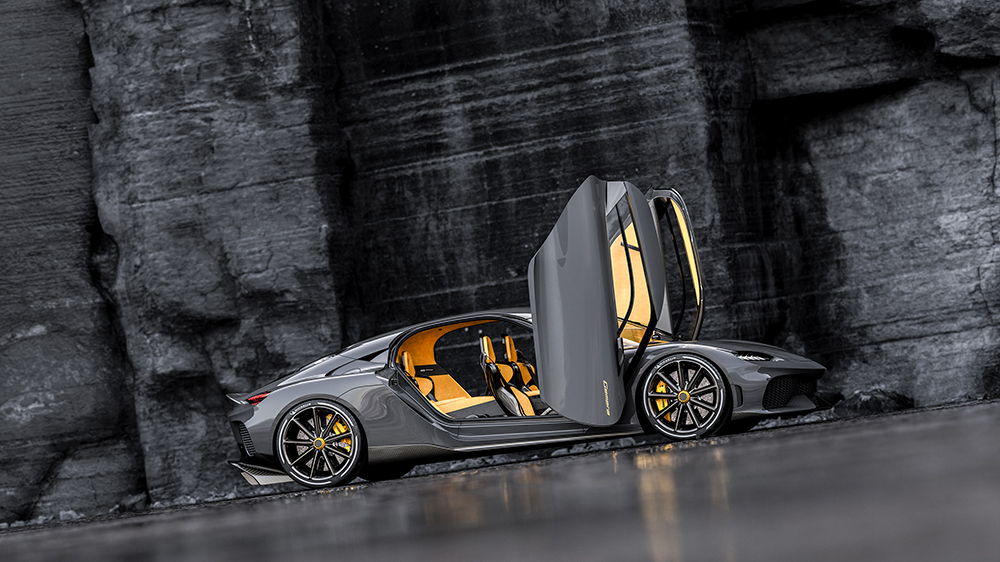 Supercars are special, but most aren’t exactly ideal for family excursions. On Wednesday, Koenigsegg tried to change that with the debut of its newest supercar, the Gemera—the world’s first “Mega-Grand Tourer” and the marque’s first four-seater.

We know what you’re thinking: Just because Koenigsegg is trumpeting the Gemera as a four-seater doesn’t mean it actually has room for four. But crack open those giant dihedral doors and you’ll find a roomy interior with more than enough room for a driver and three full-sized adults in it yellow-suede seats. Other interior features include a touchscreen infotainment system, a smaller screen above the squared-off steering wheel and eight cup holders, half of which are heated, the rest cooled.

Of course, a cockpit that spacious means the Gemera has a unique shape for a supercar, even by Koenigsegg’s standards. That doesn’t mean that it’s restrained, just that it looks more like a menacing hatchback than anything else we’ve seen from the brand. But don’t worry, the brand’s signature dramatic curves still abound.

But Koenigsegg has much more to offer than space and over-the-top design. This is a supercar after all, and it has the sprawling hybrid powertrain to prove it. The Gemera is powered by a sequentially turbocharged 2.0-liter inline-three engine—dubbed the “tiny friendly giant”—in conjunction with three electric motors.

On its own, the “tiny friendly giant” can produce 592 horsepower and 443 lb-ft of torque, but when all four are working together, they combine to churn out a stunning 1677 horsepower and 2581 lb-ft of torque. All that power has given the car some serious zip, too, as its able to go 0-to-62 mph in just 1.9 seconds. Additionally, the brand claims that the three electric motors, which get their juice form a 15.0-kWh battery, has a range of 31 miles. That’s may not be much, but the car’s 590-mile range in hybrid mode certainly is.

Koenigsegg is a niche automaker and sure enough the Gemera, despite all its space, will be limited to a production run of just 300 examples. Pricing info hasn’t been made available yet, but given the marque’s pricing history, it seems pretty safe to assume that the world’s first “Mega-GT” will cost in excess of $1 million.

Check out more images of the Gemera below: