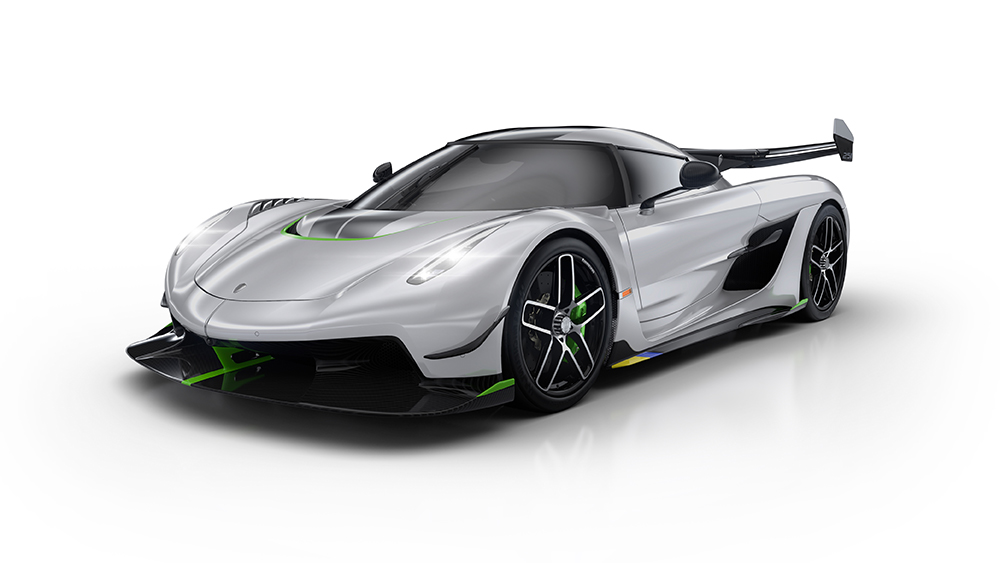 Jesko von Koenigsegg is the father of one of the greatest automotive minds today, Christian von Koenigsegg, and now he’s immortalized as the name of the absolutely staggering successor to the Agera RS. The Swedish company unveiled its latest hypercar at the Geneva Motor Show today, and it’s packing one absurdly potent powerplant capable of 1,600 horsepower.

The Koenigsegg 5.0-liter bi-turbo V-8 is good for 1,280 horsepower on regular gasoline from the pump, and if you step it up to ethanol fuel, E85, you’ll get the full shot of 1,600 ponies. The torque peaks at 1,106 pound-feet, around 5100 in the rev range, but you’ve got 738 pound-feet of twist at your disposal starting at 2700 rpms. That mill’s got a new 180-degree flat-plane crankshaft (so it must sound like the gates of hell opening when you’re on the gas), a reimagined intake and giant turbos. An anti-lag system pumps 290 pounds per square inch of air into the puffers to prevent any delay in the boost.

That walloping power gets down via a clever nine-speed transmission that boasts seven clutches. The Light Speed Transmission, as Koenigsegg calls it, doesn’t adhere to the rules of sequential shifting, instead allowing you to go directly from 8th to 2nd, if you need, without any delay. The whole setup is actually lighter than a dual-clutch. The transmission is manipulated with two-position paddle shifters.

The highly effective Triplex damper system that was employed on the back of the Agera makes a triumphant return on the Jesko, but now also appears at the front of the beast, too. Active tweaks keep the handling on point during high aerodynamic loads without a fear of grip slip. There’s also a rear-steer system that is constantly monitoring things like wheel speed, steering angle, acceleration, and engine speed.

That beautiful shape of the Jesko is in part what helps it impart 2,205 pounds of downforce at 171 miles an hour, which is a 40 percent gain over the Agera. Active flaps up front and a variable self-adjusting wing in the rear help contribute to that impressive number. Of the 125 units that will be made, 80 have already been spoken for.